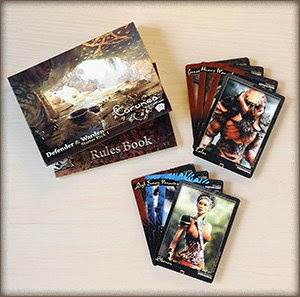 I take reviewing games pretty seriously. I know I make a lot of jokes, and say a lot of really retarded crap about games, and generally look like a buffoon who happens to like games, but I also know that I have readers (and I send a big 'hello' to both of you), and that my reviews might cause a sale every now and then, or stop one from happening. So I don't review games if I don't play them first. And I don't think game companies should send me stuff for free, so if I take a game, I write a review.

The folks who make Corunea complicated this for me even more. The starter deck comes with base cards for two characters, for a total of 71 cards. Only you need 50 cards to build a deck, and they only sent me one starter. And even though I got a few boosters, too, I still don't have 100 cards I can use in a deck. So I've had this game since before Easter, and I haven't played it. And I don't want to write a review of a game I haven't played, which puts me in an uncomfortable position vis-a-vis the nice people who sent me free stuff to play with.

But I figured out a workaround, because I really need to write this review. I combined the decks, wound up with about 30 cards for each deck I could actually use, threw in a bunch more that are completely useless, and then had two decks of about 45 cards each. Then I played myself. And in case you're wondering, yes, it is a little confusing to play a collectible card game by yourself. The upside, though, is that I won.

Corunea bills itself as a 'role card game'. I thought this meant it would be like an RPG that you played out with cards. It's not. It's still a regular ol' fighting game, but with the kind of detail you would find in a roleplaying game. There are adventures, but these are just specific locations with specific rules for beating the snot out of someone. Some of these adventures can be played by more than two people, so you could put together teams, but it's still not a roleplaying game. I guess I was a little confused - but that's understandable, because both the game and the marketing material is poorly translated from French.

So the game actually works pretty well, if you can figure out what you're doing. Sadly, the odds of figuring out what you're doing are not particularly good. It's kind of like saying you would be good at cribbage, if you could only figure out what that drunk Limey was thinking when he made the most convoluted and arbitrary set of rules ever used in a card game. The French people who made Corunea realize that the game is tricky, though, so there are Flash tutorials on their website (allow me to point out that if your game is so tricky that you have to hold online classes, you might have trouble finding regular fans).

The very basic parts of Corunea aren't that tough, really. You have a character card with your stats, and a position card (like a miniature) that you place around the location card to determine where you are in relation to the other guy trying to scoop out your brains with a melon-baller. Your character card has percentile stats for attack, defense, dodge, and lots of other stuff, and just about any action requires you to roll under the stat number on the card. Actually, that is an awful lot like an RPG, at least as far as combat.

It's when you get past the basic stuff that the game becomes really confusing. You have sanctuary cards where you can rest and recover, only I don't know when you use those because the online tutorial doesn't go that far, and the rulebook appears to have been written by a French PhD candidate who was loopy on absinthe and filterless cigarettes. You can use effects and states and substances and other stuff, but even with the tutorial, I'm not sure when those are supposed to happen. There's some kind of holding bin on your guy, but I'm not sure when those cards are supposed to come in or go out, and there are like twenty different icons describing damage and actions and bowing and bonuses and whatnot and I gotta tell, I got a little lost.

Now, it's not entirely fair of me to beat the crap out of this game when I admittedly have never played it against another person. It might just be that this is an amazing game with astounding potential, but it seems to me that you need to know one of these French people who made it, and have them teach it to you, if you want to play it right. Since I don't know any French people at all, much less French gamers, much less French game designers, I kind of got the short end of that stick.

I will say this, though - Corunea is absolutely gorgeous. The rules might be a plane crash into shark-infested waters in a nuclear bomb testing zone, but the art is brilliant. Each card features some amazing painted art. It's almost worth picking up a couple boosters just for the pretty pictures. And honestly, I think that if I could figure out the game, I would probably enjoy it - but I need help. I'm really not very smart, and these rules make my head hurt.

So there you go. I've discharged this particular obligation and reviewed this game. To sum up, I think this would probably be really cool, if I could just hire Navajo code talkers to decode the rules. I just don't have the dedication and time to commit to learning a game this difficult, even if I think it's really, really pretty.

Pros:
Brilliant, breathtaking art
A combat system that appears to work very well
Some of the best art I've ever seen in a card game

Corunea is not for stupid people, but if you have the mental stamina to learn it, it's probably pretty fun. If you want to try it out, you can get some cards here:
http://www.corunea.com/shop.php?p_type=cg
Posted by Matt Drake at 5:10 PM