Board Game Review: Starcraft, The Board Game 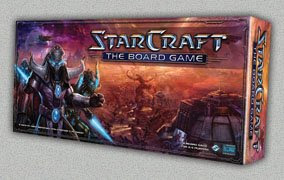 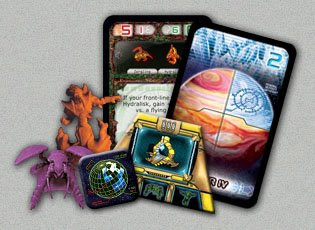 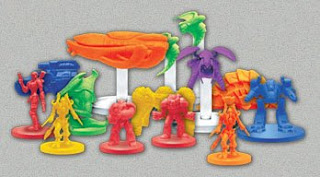 One of my favorite guys to game with is a dude I've mentioned before, when I reviewed Shogun. I call him Rockford, because he reminds me of an aging-but-clever TV detective. He's a great sport, and it's impossible to get him riled up. You can call him old, question his game decisions, mock his clothing and tease him about the silly ringtone on his phone, and he always just grins and acts like it's all part of his plan. Maybe he's crying on the inside, but since he's way bigger than me and strong as an ox, I'm pretty sure he just doesn't care, and knows I'm just teasing because I'm a kind of a dick.

But I gotta tell you, there are some games that don't suit Rockford at all, and the Starcraft board game is one of them. Rockford can keep about eight rules in his head, and the rest fall out like a game of 52 Pickup. Starcraft has more than 40 pages of rules - and these are dense pages of rules, so if there were more pictures, they would be a novella. You know when preachers tell you to be careful when you pray for patience, because God will give you an opportunity to learn it? What they mean is, God will let you play Starcraft with Rockford.

The Starcraft board game is a lot like the Starcraft video game, except that you don't have to micro-manage a team of workers who, left to their own devices, sit around getting their faces shot off with both thumbs up their asses. There are Zerg, and Protoss, and Terrans, and they fight for conquest in the galaxy. You can train a ghost to nuke some enemies. You can grow a swarm of Zerglings and take over planets. You can mine minerals, collect vespene gas, and research new technologies.

But there are some pretty big differences. For one thing, you don't need an internet connection to play with friends. You play the board game because you've got a bunch of friends with you; you play the video game because you don't have any friends around at all. One has you surrounded by people you probably like, desperately trying to steal their resources and out-maneuver them. The other has you sitting in a dark room all by yourself. You may or may not be wearing pants. You may or may not smell like Cheeto dust and navel lint.

Another key difference (and maybe slightly less obvious) is that the board game covers the conquest of the whole galaxy, so it's kind of like every turn is one of those drawn-out battles in the video game, where you build a bunch of crap and then send soldiers off to get slaughtered by the boatload while your retarded workers stand around picking their feet. Only you get to skip the unmotivated workers and the part where you act like a construction contractor, and just launch ships to alien planets to try to steal them from your friends.

The board in Starcraft changes every game, because it's made up of a bunch of planets that the players place and connect before you start playing. It makes every game different, but like so many games of this nature, it's possible to get a pretty impressive edge just by getting yourself isolated early on. This is one of my biggest problems with the game - a bit of lucky positioning before the game starts, and you've got a massive advantage right out of the gates. While everyone else shoots at each other and blows all their little plastic soldiers into little plastic pieces, you can just sit there and build, until you're ready to unleash your minions on an unsuspecting galaxy.

The Starcraft board game is, as I mentioned above, very complicated. Before you do anything on any given turn, you assign your orders face-down to the planets where you want to act. Only there are restrictions - you have to have dudes at one planet to put orders at the next one, and certain orders only have an effect if you have a base at the planet, or if you have a transport, and even if you can use an order, there are rather complicated rules surrounding every one of them. Add in the special, improved orders, and you've got a recipe for confusion.

Take, for instance, Rockford. No less than six times during the game, Rockford put a mobilize order on the planet he wanted to use as a launching point, when we repeatedly told him that the mobilize order is placed at the destination planet. At least three times, he placed research orders on planets he didn't control. He built buildings he couldn't afford, he trained units he couldn't command, and he spent workers he didn't have. Basically, he was a trainwreck, because Rockford is a great gamer, and he's smart enough to win a lot, but he gets overwhelmed by too many rules.

And Starcraft might have too many rules. Hell, I made plenty of mistakes the first couple games (it's just a lot more entertaining to make fun of Rockford), just because I either forgot a rule or misunderstood the ones I remembered. It might take three or four games to internalize the game to the point that you can plan more than one turn ahead. And since it will take you like three hours to play, there's one hell of a learning curve.

So if you've only read up to this point, and watched me tease Rockford as revenge for having to watch him take twenty minutes to buy two workers and a space marine, you might think I didn't like Starcraft. But that's really not true. In fact, the game is awesome. It's an incredible amount of fun, and it has almost no luck to it, and it's exciting and fast-paced and brutal. And on top of being really fun to play, it's also one of those Fantasy Flight super-games, so there are hundreds of really kick-ass plastic miniatures in the box. There are so many cardboard counters that it took me more than an hour to punch the whole thing. This is a shining example of FFG making sure you get as much game as you pay for.

But like I keep saying, it's tough to completely understand the first time through. In fact, we didn't finish our first game, so we met later to try it again, and for the second game... Rockford won. And when he did, he was as surprised as the rest of us. It turns out that his victory condition was to take two whole planets by phase III. He didn't know that was his victory condition, and the only reason he didn't spread himself too thin is because he kept having to throw away his mobilize orders, and the reason none of us knew he was about to win is because Starcraft is one hell of a big game, and we just weren't really keeping track. So after playing Starcraft with Rockford twice, and having to watch every turn to try to get him to play correctly, the daffy old bastard wins on accident.

I am a little sad as I write this review. The thing is, while Starcraft is a total blast, I don't know if I'll ever get to play it again. It's a huge game, and it's very complicated, and it's quite intimidating. I'm not sure when I'll be able to rally a group for another shot, especially when I have a stack of other games that I need to play so I can tell you all about them. But there is one thing I know that makes me a little happier - I know that, under no circumstance I can imagine, would I ever play Starcraft with Rockford. Never again.

Starcraft - The Board Game isn't just a fun game. It's an expensive fun game. You can buy it here, if you have a bunch of money:
http://store.fantasyflightgames.com/starcraft-board-game.aspx
Posted by Matt Drake at 7:18 AM

The Rockford files is still a classic! I can remember begging my friends driving to pull a RockFord.


Great review - 3 hours is to long for me, but man the game sure looks cool, I will get it some day just to have and drool over all the cool stuff inside!

The trailers shows that sequel will be at least as good as original was. But this delaying of game launch seems to be more matter of monetization strategy, not development issues.

Some may feel squeamish about eating it, but rabbit has a fan base that grows as cooks discover how easy they are to raise — and how good the meat tastes.