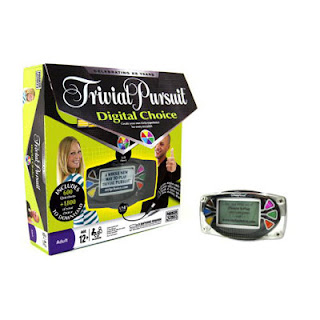 I think my favorite thing about writing Drake's Flames is when I get care packages from Hasbro. There's nothing like opening the front door and finding a box of games I didn't know were coming. Some of them are really awesome (I love the new Stratego), and some are not really my bag (Operation may be funny, and my kids love it, only it's not exactly HeroScape), but it's still like Christmas, because I never have any idea what's going to be in the box, and I'm almost guaranteed to like it.

The most recent package, however, must have been meant for my wife. It had two new versions of Trivial Pursuit, and my wife would generally rather play Trivial Pursuit than just about anything else. I suck at Trivial Pursuit, mostly because I can never remember who holds the Olympic record for underwater skeet shooting. My wife can pull baseball stats and geographical oddities out of her brain with equal ease, while I have to just sit there and wonder where in Hell I would find the Maldives.

But then again, Digital Choice might be made just for me. It comes with the standard game board and colored pie slices, but instead of a box full of cards, there's a handheld device and a USB cord. The device comes preloaded with a bunch of questions, but the real beauty here is that you can use the cord to download questions from the Trivial Pursuit website. I love technology!

The questions you can find online are all over the map. Some are incredibly esoteric. I can find a category on mythological creatures (for my bookworm daughter), a bunch of questions about cryptozoology (my son's favorite new bizarre hobby), a batch of questions about famous chefs (for my wife who loves cooking shows), and a section on sci-fi and fantasy movies (that one's for me, because I am a total nerd, and yes, I do remember who had the starring role in the surprisingly entertaining direct-to-video Wing Commander movie). Finally I can pick at least one category where I won't have to sit there like a drooling potato-head raised by a family of squirrels in the wild mountains of West Virginia.

However, if they had really been making the game for my family, they would have also made the following selections available:

Puppies, ponies and pouting (for my primadonna daughter)
Farts, burps, snot and poop (for my woefully immature thirteen-year-old boy)
Being awesome (for my wife, who sometimes reads my reviews)
Fried food and beer (I love fried food and beer!)

The questions seem a lot easier when they're in categories I know, but you still have the occasional bizarre question about children's books. I mean, I know who Roald Dahl is, but how the hell do I know where he was born? That frustrates my kids something fierce, like when my son gets a question about gods and goddesses and has to answer something about Hindu deities, instead of the Norse gods he spends all his time researching (you know, when he's not looking for bigfoot sitings online).

All things considered, this is still Trivia Pursuit, but personalized for you. You can let the adults each pick one category, and the kids each get two, and then you can be on even footing. For once, my daughter has a chance at the big prize. She's not going to be able to tell you who was the president when they built the Suez Canal, but she sure does know her flying animals. The game isn't necessarily easier - I got stumped plenty of times - but it's a lot more even when you can pick your areas of expertise.

Of course, you can still do that age-old tradition with Trivial Pursuit questions, where you just ask each other questions until someone says, 'hey, cut it out or we won't have any questions left for the game!' and then everyone else tells that jackass to shut up.

Pros:
Good variety of questions means that anybody who isn't completely ignorant can find some questions they can answer
Lots of really fun questions
When you finish one category, you can go download more

Cons:
Only 50 questions per category means you'll run out sooner than normal

Trivial Pursuit: Digital Choice gives you the opportunity to decide what kind of questions you like best. If that sounds like your kind of Trivial Pursuit. go here and get a copy:
http://www.hasbrotoyshop.com/ProductsByBrand.htm?BR=553&SBR=673&ID=22052
Posted by Matt Drake at 3:01 PM

Who wouldn't love suprise packages waiting for them at the door.

I love that you can down load diff. stuff, just to cool, I think that adds a lot to the game myself.

So I just got one of these today and I already downloaded my allowed 1800 questions. I'm currently trying to figure out how to go about downloading more. It says in the FAQ to go to Hasbro's online shop to buy more questions but I can't find anything on the site regarding more questions.

It also makes me sad that this was $50 not 2 weeks ago and people have been getting it for less than $20 now.

Seems to me that this electronic edition is already dead.