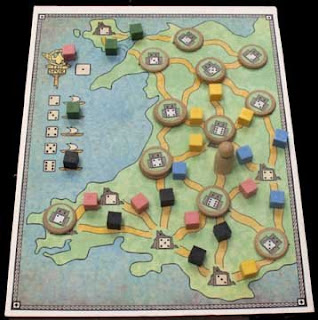 I've got a soft spot for small-press publishers. I think I've established that. A small publisher who breaks off a great game impresses the heck out of me, and a small press guy who can make anything (even if it sucks) is still pretty awesome. So when Vainglorious Games asked me to review Cambria, their only game, I was in. Small publishers are like those little thrift stores you find in small towns - they might have a store full of suck, but then you might find a hidden treasure behind the ceramic dolls and broken chainsaws.

Cambria's theme is the conquest of the little nation of Cambria (thus the name), which is located in current-day Wales. The Romans are trying to hold onto it, while the Hibernians (the players) are actively trying to break down the Romans and take over the whole area. Sadly, like so many Euro-style games, the theme is largely interchangeable. It could be a game about space lords and trading routes, or even just a themeless abstract game. That's unfortunate, in my opinion, because one of my biggest beefs with lots of Euro games is a crappy theme. The theme idea is cool enough, but the game doesn't really carry it out, which means you could replace the forts with drunk college chicks, the armies with horny frat boys holding camcorders, and the Legion with a fun-stomping copper. And then you could totally make a Girls Gone Wild board game, and then you've got yourself a theme! In fact, that's so awesome, I'm ignoring the theme of the game and remaking it Loose Girls on Film.

The game has you trying to score with the drunk co-eds on the map. Girls are valued according to the number of chairs at their tables, from two to six, and when all the chairs have frat boys in them, the girl goes back to whichever fraternity buys the most drinks. To figure out where to place your horny frat boys (represented here by small plastic cubes), you roll two dice. You might get to move the cop, displacing an opponent's guys and protecting a girl's honor (and thus making sure nobody gets the big points if you can't have them). You might get to put guys at the bar, which will let them deploy more strategically later. Or you might just put a cube on the board and compete for a girl.

The game ends when only six girls are left on the board. Then you count up which frat has scored with the hottest girls, and the winner gets to make a great video that is totally unsuitable for anyone under 18. Then the fathers find out and go find the fraternities and burn them to the ground, and then you can make horror movies about loser college guys getting murdered in awesome and gory ways, like with flying lawnmowers and paper shredders and pools full of man-eating piranha. Oh, in case it wasn't clear, I totally made up that part about the angry fathers. But that would still be awesome.

The actual strategic gameplay of Cambria is pretty tight. The game plays really fast, and every turn provides some way to improve your position. Strategy and planning are critical, as is an ability to anticipate your opponents' moves. Although a lot relies on a die roll, you've pretty much always got enough options available to make a strategically positive maneuver. So even if the theme doesn't work out great, the actual game shows a ton of potential, and I would like to play it again.

Sadly, Vainglorious Games seems to be a little short on experience in the area of board games. The list of stuff they did wrong is a little depressing for its considerable length. For starters, the components are so cheap, they look like a prototype. The box is cheap - I've bought shirts that came in nicer boxes. The board is a printout glued to a sheet of matte board. The art is adequate to play the game, but it's not pretty. And even if the components were decent (which they are not), the game isn't available on the Vainglorious Games site. You can only buy it at the retailers listed on their site... and there are only four, and three of them don't have a listing for it. The fourth is a brick-and-mortar with no online store. So you can't buy it, and I can't even tell you how much it costs. I can't figure out how you can get a copy, and unless you can see past incredibly poor presentation, you probably wouldn't want a copy, anyway. No advertising I've seen, no marketing I'm aware of, and even if you did stumble across the game and want it despite it being horrifyingly rough, you can't get it.

I honestly hope that Vainglorious Games can pull their collective heads out and get this right (though collective heads is probably redundant - this looks a lot like a one-man show). The game could be really good - Reiner Knizia's games often show less imagination in mechanics, and seldom lend themselves so well to good play. Cambria has the potential to be a big seller, but not the way it is now (especially because you can't buy it). If the guy who made this game can get his ducks in a row, this company has massive potential to churn out some of the best games you'll play. But if they keep going the way they are, they're in deep hoodoo, and maybe filming videos about slutty college chicks would be a better career decision.

Cons:
Absolutely horrible production values
Weak theme
You couldn't buy it, even if you wanted to

I can't tell you where to find this game, but I can send you to their site so you can ask for a copy yourself:
http://www.vaingloriousgames.net/
Posted by Matt Drake at 3:03 PM

Great review. Glad you are looking out for the little guy/gal. Looks like boards n bits has it in stock for $19.50

Nice review, very funny, you so need to make games your self, you have some wonderful ideas that would sell very well I feel.

You can actually get the game now. I recommend it - if you can see past the quality of the components, it's a fun game.