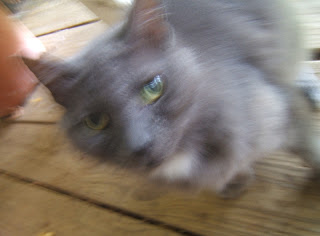 Last night, at 4 in the morning, I woke up to one of our dogs barking furiously. Since she doesn't tend to bark for no reason, I got up and looked out the window. I saw three wild dogs chasing my wife's cat. Without giving it any thought, I ran out the door and chased off the wild dogs - in my underwear. The dogs ran off, but not before they mauled the hell out of Circe. We took her to the emergency vet right away, but she was dead by the time we got there.

Circe has been part of my family for as long as I've had a family. She was my wife's cat when we met, and so when I married my wife, the cat was part of the package deal. I celebrate my 14th anniversary in a couple weeks, and the entire time I've known my wife, I've known that stupid cat. Having her die in my arms on the way to the hospital has pretty much sucked every drop of funny out of me this morning. I'm not all broken up - I didn't really like that cat a lot - but having anything die while you're holding it and it's bleeding all over you is a fairly heavy experience.

I didn't even like Circe, but I miss her anyway. She was part of the family, and now that she's gone, it just feels like there's an empty spot on the front porch. It's not the same, feeding the crazy wild cats that live on the porch, without having to sit out there and make sure they don't run Circe off her dinner. So I'm not writing a review today, or a rant, or anything else.

Come back Wednesday, and I'll write about games again.
Posted by Matt Drake at 7:04 AM

Wow. Tough morning. My condolences to your wife.