Board Game Review - Quest for the Dragonlords 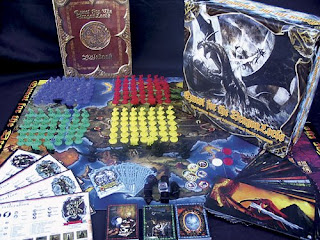 It's tough to decide what to write about Quest for the Dragonlords. On the one hand, it's pretty damned fun. On the other hand, it's not really a very good game. It has a metric assload of pieces, including little plastic soldiers in four colors for each of the four competing races, but the sculpts on those figures are so bad, they look like someone carved them out of pieces of crayon and then left them in the car in the middle of summer. It has a fairly generic fantasy theme, and an interesting questing phase alternating with the army phase, but some of the worst flavor text ever written for anything, including the embarrasingly bad roleplaying game I wrote when I was in sixth grade. The map is pretty, but confusing in places, and apparently represents a world shaped like a toilet paper tube.

At first glance, Quest of the Dragonlords would appear to be a Risk clone. You start out by placing your troops all over the place, and then they're going to maraud from one region to the next, mowing down enemies. That seems a lot like Risk, but two things make this anything but a Risk clone. First, the battle system results in so much attrition that you can't generally afford to keep pushing after you win a battle or two, and second, you really need to reinforce everything to make sure you don't have a dragon teleport into your home town and eat your king like a cheese danish.

If you keep looking, the resemblance to Risk fades completely. There's some very strategic naval movement, which, if you use it properly, can give you a huge edge. There's a questing phase, where your soldiers wind up wandering around the middle of the board trying to recruit an incredibly powerful dragonlord to command your armies (and probably finding women of low moral character - I'm not making that up, it happens). Each player leads a different race, each with wildly different abilities. The orcs have really cheap armies, the elves can sneak attack, the barbarians are tough and they're great sailors, and the dwarves suck.

The goal is to take over three kingdoms. Since there are six on the board, and only four players (unless you get the expansions), two kingdoms are easy pickins'. The others you'll have to take from your opponents, and that's a lot trickier, because they're a little more prone to hit back. The battle system is so brutal that it can take a while to wear down your foes, unless you're the barbarians, because those bastards are tough as nails and hit really hard. If you're the dwarves, opponents will go through you like corn after Thanksgiving dinner.

Now, the interesting part comes in the part of your turn between the naval movement (in which no combat occurs) and the combat phase (in which there is quite a bit of combat, as the name probably implies). This part is the questing phase, and during this part, you lead a party of adventurers around the wasteland looking for a dragonorb, so that you can summon a dragonlord. That's kind of where the name of the game comes from, I think. Only there are lots of other things to do in the wasteland, like visit the oracle, shop at the witch's hut, hang out in the village, or go on quests. It's a little like a trip to the mall with your mom, because you never get to stop at the stores you like and instead have to spend forty-five minutes looking at scented candles and potpourri bags. The quests vary from completely pointless to arbitrarily awesome to horrifically deadly, so one player will have to kill a rat to get three gold coins, then the next player will just magically wind up with a superpowerful dragonlord, and the guy after him will have his entire quest party captured and stuck in a dungeon somewhere, probably being force-fed moldy cheese and made to watch Hugh Grant movies until they pray for death.

One interesting and completely screwed-up thing about this game is that you can take someone out of the running by killing his king - but that just means he can't win, so he's still free to play, and just stomp all over causing random and pointless mayhem. In one game we played, I managed to score a dragonlord, and instantly became the most dangerous dude in the game, with a huge teleporting army that laid waste to everything in its path. And then someone killed my king, and so despite being the most powerful player in the game, I couldn't win. It's a real kick in the junk to be the meanest mother on the board and have no prayer of actually winning the game.

The rules are in a really pretty book. There are graphics all over the place, and pictures of battles, and various decorations. Unfortunately, the book is more disorganized than a fourth-grader's sock drawer, so you'll have to read it three times to know how to play, and you'll still wind up flipping through the rules as you play, and until you've played the game, you won't really know what the hell you're doing.

I had a good time playing Quest for the Dragonlords, but it's really not a good game, from the standpoint of being even remotely fair. The barbarians are wildly overpowered, and the dwarves are almost completely worthless. The quests are bizarre and unbalancing, and if you can get a dragonlord before everyone else, you're going to kick a lot of ass and take a lot of names. It's a blast to maraud around and get into fights, but in the end, it feels like winning has nothing to do with skill, and everything to do with getting lucky and not winding up with all your guys being seduced by strippers.

I think the problem here is that the guys who made Quest for the Dragonlords made a cool game, and then decided that if a little was good, a lot was better. It's like my ex who used to cook me dinner - she would start with what would have been good enchiladas, if only she had left out the nutmeg and onion powder. The dinners were still interesting and kind of fun to eat, but she never would have won Top Chef. And Quest for the Dragonlords isn't likely to start pulling down awards at Essen, either.

Cons:
Many components are cheap crap
Rules organized by a hyperactive squirrel
Just way too much stuff, like a fat guy in a skinny suit
Arbitrary and random occurences take all the value out of the great strategic opportunities
Some of the most extreme swings of luck you'll ever see

If you don't care who wins, and you don't mind luck that would make playing craps in Vegas look like a good investment, you might really like Quest for the Dragonlords. You can get it here:
http://www.rafm.com/Merchant2/merchant.mvc?Screen=CTGY&Store_Code=RAF&Category_Code=DL
Posted by Matt Drake at 3:34 PM

Did you review the 1st or 2nd edition of the game? I'm thinking 1st but the picture above looks like 2nd edition. A follow-up review of the 2nd edition might be in order as it is reputed to fix many of the problems you have highlighted in your review and prospective buyers might pass over this game thinking that you have reviewed the current incarnation.