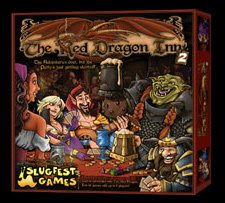 You know what's fun? Beating people. And also drinking. And also beating people so that their tolerance is lower, and a couple shots of scotch put them under the table. And also stealing their money when they're passed out. That's fun, and anyone who doesn't think so is probably a homely woman who thinks the height of entertainment is darning socks and flipping through the Lillian Vernon catalog to find cute costumes for her cats, and those poor cats probably scratch the hell out of that lady's tie-dyed kimonos and piss in the refrigerator, but that boring lady probably still keeps those cats around if they'll wear a shirt that says, 'I Heart Catnip' with a little bunny-eared tiara.

So since we all know that punching people, stealing money and drinking to excess is a ton of fun, the guys at Slugfest Games knew we wanted more of it. Red Dragon Inn (I reviewed it right here) is all about beating the piss out of your friends while trying to steal their gold and get them drunk. It's an absolutely hilarious way to enjoy an evening in a bar with three of your closest friends. Since the action takes place in a bar, if you play in a bar, it's even better - then you're playing a game about drinking in a bar while you're drinking in a bar. If you punch each other, that would be perfection.

The only problem with the first Red Dragon Inn is that you can only play four different adventurers. After a few plays, you'll want to see something besides dumb Zot jokes (which are actually really funny, unless they're hurting you) and Gherki cheating at cards. Sure, Dierdre the priestess is hot, but you can only take her sanctimonious teetotaling for so long.

So you need more characters. You need Gog the half-ogre. You need Dimli the dwarf. You need Fleck the bard. But most of all you need Eve the illusionist, because while she can make you see whatever she wants you to see, she wants you to see a smokin' dame in a little bikini. Impractical for adventuring, sure, but hot. Really hot.

The new cards don't just present different pictures with the same actions. New stuff is added to the game. For instance, Eve's disguises aren't just for damage or dodging drinks - now she can pretend to be the wench and swipe money because you think you're tipping the barmaid. Dimli can pull out his money belt and find reservoirs of money he didn't have when the game started. Fleck can woo the audience and get out of paying his bill. And Gog - oh, Gog is awesome. Gog just smacks things.

New drinks are introduced, too. Now there are drinks that will make most anyone sick - but half-ogres just think they're yummy. Plus there's ambrosia, which will cost you a lot of money, but will heal you and help you sober up. And Red Dragon Inn 2 introduces drinking contests, where everyone has to draw a drink card, and the stiffest beverage wins money from the pansies at the table who can't hold their liquor.

Possibly the best thing about Red Dragon Inn 2 is if you own both this one and the original, because now you can set eight people around a table and punch, stab, burn, cheat, steal, sneak and weasel out of drinking - but with twice as many people as before. The game takes on a whole new attitude when you've got a half dozen survivors, all either half-drunk or nearly broke. The expansion is 100% compatible with the original, so it's not like you'll have to explain new rules to your old crowd. Plus now there are so many fun ways to mangle people!

If you liked the original Red Dragon Inn, you should waste absolutely no time in picking up Red Dragon Inn 2. It's the same brilliant hilarity that you loved in the first one, but now with more face-punching. Add in drinking games and Gog's hilarious grunting English, and you've got hell of a fun game.

Pros:
Same great game
New hilarious characters
New drinking cards that mix things up
Now you can play with twice as many people

Cons:
Still a fair amount of luck
Still fairly mean-spirited (though that's a lot of fun)

If you liked the first one, you should get the second right here:
http://www.slugfestgames.com/games_rdi2.php
Posted by Matt Drake at 6:34 PM

You not think Gog funny? DRINK.

I really want the original, now I must have the expansion. I love the idea of playing this one at the bar. It sure sounds like a winner to me!

Thanks for the article, very helpful information.
here | site | site