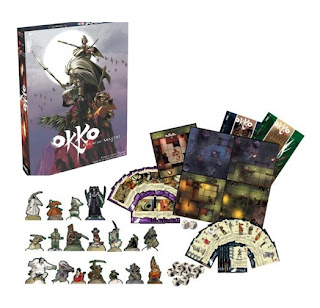 I think there must be a repository somewhere of silly names for board games. You've got Yspahan, which doesn't have enough vowels. Then there's Agricola, which makes me want to yodel and ask for a throat lozenge. And now we've got Okko, a game based on a comic book of the same name, but that same name sounds like a fat guy choking on a frog.

Silly name or not, however, the theme is ten tons of kick-ass in a five pound bag. One side plays Japanese samurai demon hunters, and the other side is evil monsters. Sword fights in Japanese courtyards between demons, ninjas and samurai warriors make for one of the bitchenest themes ever (and no, I do not think bitchenest is actually a word, but you know what I mean, so shut up already). The comic book is a dramatic and rather dark story of Okko (the lead character, a skinny samurai and not a fat guy with a toad in his windpipe). Okko is joined by a reformed demon wearing a mask that lets him fight for the good guys, a priest who likes to drink a lot and then take off his pants, and a few other people who are just as interesting (though maybe not as funny as the drunk buddhist in a loincloth).

The game is a tactical recreation of the kinds of interesting throwdowns that can occur when you have evil critters in scary masks and pointy sticks fighting brave warriors with shiny swords and magic headgear. The action takes place on a square grid, which many gamers aren't going to love, but it works better than a hex would have, and so I tend to cut it some slack. The miniatures are actually cardboard cutouts on plastic stands, and the boards are illustrated diagrams of paper-walled temples and shrubby gardens. The six double-sided boards can be combined to make a dive bar at a wharf, a tranquil rock garden, a claustrophobic brothel or a corrupted temple.

For those of you who play tactical games, you might think you're looking at a new theme with essentially the same old rules. You'll be expecting wounds, activations, and maybe morale rules. But Okko doesn't dig the same old rules. Okko says you can stick those old rules where they won't get sunburned. Okko takes the traditional man-to-monster tactical recreation and makes all new wacky rules, just so you won't get bored.

For one thing, there are no wounds. When you're wounded, you turn over your card. If you have to turn over your card again, you're dead. These rules apply to everyone from the rat-faced dude who looks like a very ugly crossdresser to the mighty towering sumo demon. You have three states - ready to rock, beat down and flatlined. But the beauty is that you can take a turn out, try to roll lucky, and turn your beat down monkey demon back to full combat ready. Stats are different on the back of the card, to reflect you taking a beating.

Another difference is that you don't have to actually get hit to get your card flipped. There are ways to maneuver and trap an opponent so he is weakened just by having to move through your gathered forces. If a fighter has to retreat, and can't fall back without running into another enemy, he's going to get his card flipped. If you start your turn in contact with another enemy (not easy to accomplish, but awesome when it works out), you're going to get your card flipped. If that's not some wacky mechanics, I don't know what might be.

Of course, this game is made by French people, and we all know how those foreigners like to make wacky rules. So instead of giving you abilities that you can just use, or that require you to spend points, you roll a handful of odd dice. These dice show symbols representing fire, earth, air, water and something called a toril (but they kind of look like a chicken, a freeway overpass and a taco stand, so you can call them whatever you want). You assign one of these dice to use a special power, and if you don't have the die you need, you can't use that ability. But you can save dice from turn to turn, so if you get the roll you know you'll need next turn, you can set it aside and store it for later, like a six-year-old sticking gum on the bedpost. With the dice, though, you don't wake up with gum in your hair.

The most interesting part of Okko is the control zone. A character can influence only three squares, but by careful placement, you can control a huge area and build a virtual spiderweb through which no opponent is going to penetrate unscathed (unless the opponent is the great big demon guy, because DAMN is he tough). You can set up defensive positions, offensive rushes, traps and more. The control zone thing is one of the more brilliant aspects of Okko, and one of the things that makes it as fun as it is.

The rules for Okko are simple enough, once you understand them, and they're a bunch of fun. The game plays really fast, and while there is sometimes far too much luck, careful tactics and sound strategy will help if your dice are running a little cold.

I do have a few complaints. For one thing, the art on the boards and figures is too dark. I know it's a dramatically tense game, but I like to be able to see everything. I like bright colors. Sue me. And another thing - if this was an FFG game, it would come with little plastic dudes. I totally wish I had little plastic dudes, because while they do make figures you can buy separately (and you can even get them prepainted), you may have to sell plasma to afford them. I know Asmodee can't swing the kinds of economies of scale they get at Wizards, but I would have gladly taken crude plastic figures with crappy paint jobs.

Happily, it's not hard to look past my relatively minor complaints. Okko plays really fast, with tactical brilliance and enough luck to keep you guessing. Plus the theme is di-no-mite, as my good friend Jimmy Walker used to say, and while the components may not be prepainted plastic, they are really pretty, and the quality is obvious.

Now if we could just convince the French to quit naming their comic books and board games to sound like a fat lady getting punched in the throat.

Pros:
Control zone rules add a whole new level of tactical maneuvering
Great dice mechanic for special abilities that makes them more special
Flipping the card as a wound mechanic might not be completely original, but it sure is cool

Cons:
There is a LOT of luck
The art looks cool, but it's too dark
Cardboard standups are so 1986

Okko is a whole bunch of fun, and the theme is one of the best ever. Go here and get one:
http://www.asmodee-us.com/games/strategy/okko.php
Posted by Matt Drake at 11:56 PM

I kept stopping by the booth at Gencon wanting to demo this game, but my timing was off and there weren't open spaces. Now I just want to try it out more.

This will be added to my wish list, this is a must have as far as I can tell. Sounds really fun,thanks

Well- plastic miniatures are now available and they are really well made.

"Agrícola" is a real word in Spanish.

The English word "Cool" in Spanish sounds like "ass."

Interesting enough this game as you sy is based on a comic, but I thought it was a manga, but then I learned it is a French comic book, interesting concept.