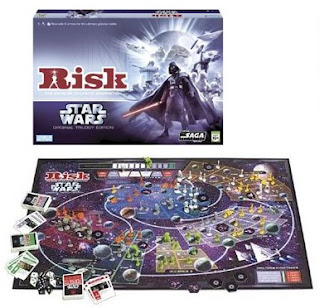 Boy, is that a long enough title for a game? It's not just Risk. It's Risk: Star Wars. And since there's more than one Risk: Star Wars, they have to add Original Trilogy. Thank God it's not limited just to the original movie, or the title could be something like Risk: Star Wars: Original Trilogy: Just the First Movie: No Jar-Jar Binks. And THAT would be a long name for a game. But this one is still long, so I'm just going to call it Risk: SW for the rest of the review, and you'll know what I mean, unless you're really dumb, and then you probably aren't reading about board games anyway. You're looking for barn animal porn or something - and having trouble finding it.

If you already know how to play Risk, you know the basics of how this game is going to work. If you don't know how to play Risk, you're either A) retarded, or B) not enough of a gamer to have ever played Risk, and reading my sarcastic review of a Risk spin-off isn't going to help you any. Besides, if you've never played Risk, why would you start with the Star Wars version? You wouldn't. Go get the new version that has objectives and stuff, and avoid the original version that will have you spending fourteen hours in a cramped basement with three guys who keep laying down beer farts and falling asleep on the game table.

Instead of a map of the world, Risk: SW has a map of the galaxy. Instead of continents, the galaxy is broken into systems, like the Core Worlds and Outer Rim and Ison Corridor. If you know where those systems are, and what planets are in them, then you're definitely a nerd, and probably own a Boba Fett costume, and have wet dreams about Leia in her slave outfit (incidentally, while I do not have a Boba Fett costume, I have had plenty of naughty dreams about that gold bikini, though I had never actually heard of the Ison Corridor before I played this game, so I guess I'm part nerd. Oh, who am I kidding - I couldn't wait to play a Star Wars version of Risk. I'm all nerd).

You might not think that Risk and Star Wars are two great tastes that taste great together, but it actually works pretty well. Instead of having everyone with even footing and the placement like the original Risk, you've got three different factions - Empire, Rebels and Hutts. You can play with anywhere from two to five people, by changing whether the Hutts are neutral or by splitting the Rebels and Empire into teams. Each faction has different goals - the Empire has to eliminate the Rebels completely, the Rebels have to kill the emperor, and the Hutts just have to control a few specific planets. This would seem like the Empire is screwed, but they also start off with like half the galaxy, and while the goal of killing the emperor might seem easy, he's hidden, and he can move around, and he might hide behind the Death Star. It balances out pretty well.

Faction-specific cards can be played to change the way things work. Like the Empire needs the 'Fire the Death Star' card to blow up a planet (which, by the way, is awesome). Other cards do other stuff, like get you extra troops or make your opponents lose their cards. You can also turn in the cards to get spaceships, because it's not Star Wars without spaceships. It's not much more complicated than regular Risk, but if you're a Star Wars nerd like me, it's way more fun than old-school Risk. For one thing, the game takes less than three hours, so you can finish in time to still get some sleep and not have to go to work all bleary-eyed and hung over from waiting for the last guy to take out Australia.

So yeah, I'm a Star Wars nerd, but apparently the guys who did the art and made the pieces were not. The board is kind of boring. The little plastic dudes are bland (the stormtroopers look like starving Ethiopians standing around like Academy Award statues), and the spaceships are just cardboard ovals. It's a little disappointing, because the game is a blast, but the pieces are crappy. It's not enough for me to get rid of the game - hey, it's Star Wars, and even without that bronze bathing suit and the gold chain, it's still awesome - but I would have liked better bits. It's freaking Star Wars. You can make toys so awesome that small children will sell crack cocaine to buy a collector's set of Jedi knights, but you make an AT-ST that looks like a drunken stork?

Pros:
Starts off the same as regular Risk, so you know the rules
Great execution of one of the greatest themes ever
Really balanced despite three very different factions
Wicked fun, finishes fairly fast, and you can blow up planets

Cons:
Pieces are not as nice as I would have liked

This game is completely out of print, but I went and found you a few copies at Amazon. I care about my readers, dammit.
http://www.amazon.com/Risk-Star-Wars-Original-Trilogy/dp/B000M8IE58
Posted by Matt Drake at 8:39 AM

This one looks great, 3 hours is short for a game of risk, in general that is.

I have stayed away from this title, but your review is making me reconsider. I think one of my local TRU has it on clearance. I may just pick it up!

Sounds we agree completely about Star Wars, Risk, and the Star Wars' Prequels. On that alone, I will buy this game.

I love the reviews by the way.

Nice game, nice review! But please considder to state a "Out Of Print" warning in advance instead of at the end...

(Keep up the great reviews!)

Matt,
I played my first game of Risk: STOTE last night. Excellent time! Three players finished in just under two hours. I initially felt the Empire had a huge upperhand, but the Hutts and Rebellion have a lot of tricks up their sleeves too. The card decks make the game. On the production side of things, I agree about the ship chits. Hasbro couldn't swing the extra two bucks for an additional forty five pieces of plastic? Ah well.

LOVE this game, bought it 2ish years ago, played maybe 16 times. Luckily a friend of mine is really into it too. So strategic! Just kicked imperial ass a couple days ago. We'll switch sides soon and i'm planning which planets ill try to start off with on our next game

Hello,
Nice blog about star wars i like it
Hollywood theme parties are becoming extremely popular these days as more and more people are deciding on putting a twist to their normal run of the mill house party.