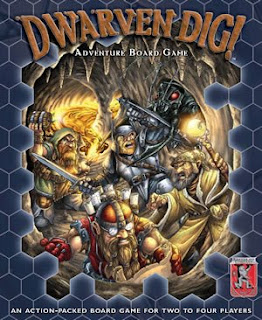 With all the talk these days about global warming and concerns about the environment, it’s great to know one game company cares. Kenzer & Company might charge a lot for Dwarven Dig!, but at least when you get it, you’ll know you’re contributing to the renewal of our planetary resources.

For instance, look at the hex tiles that make up the board. The art on the front is great, and depicts various subterranean chambers, many of which are fraught with danger like lava and rushing water and gigantic burrowing cockroaches. But before you start thinking whole forests were leveled to make these tiles, just flip one over, and you’ll see that Kenzer & Co obviously recycles. The cardboard on these is cheaper than the backing on one of those legal pads you’re always stealing from the office. It’s rough and brown and warps if you look at it sideways. It’s so refreshing to see a game manufacturer who is more concerned with saving the rainforest than catering to a bunch of whiny game nerds who want their game components to actually work.

Dwarven Dig! (the game has an exclamation mark because even punctuation is recycled) will send your team of four dwarves – a miner, an engineer, a warrior and an elder – tunneling through the mountain to retrieve treasure. Along the way, you’ll dodge cave-ins, battle hermits, jump rivers of lava and most of all, fight with the other teams of dwarves. The whole thing is basically a copy of every go-on-adventures-and-screw-your-foes game ever made, so even the concept is recycled! Thanks for saving the planet, Kenzer & Company.

Since you’ll be rolling lots of dice as you explore the mountain, Dwarven Dig! uses grit to pay for everything from better die rolls to extra movement. And because Kenzer & Company is concerned about the planet, they saved an entire old growth jungle by going to Reaper and picking up buckets full of extra flash cut off actual miniatures. Instead of having to use counters or something that might require printing or ink, you’ve got a small pile of little metal rocks smaller than the stone in your girlfriend’s class ring. Only all of it is unpainted metal, because using paint or stain would only pollute the water table. Just don’t drop one on the floor, because they’re so small you won’t find them in the carpet until they’re rattling around in your vacuum cleaner.

The environmentally conscious will be delighted with the confusing and overly complex rules for Dwarven Dig! These rules should deter most corporate raiders from even attempting to pillage the mineral resources of this beautiful mountain. There are only four phases in a turn, but each phase is broken into lots of little pieces, and you’ll have to check the reference card every turn to make sure you’re not forgetting something. And the Green Party can continue to celebrate Dwarven Dig!, because the game saves paper by only including one reference card, and telling you to just pass it around the table. You greedy despoilers who want to complain just because you never know what’s supposed to be happening need to quit thinking of yourselves, and start thinking of Mother Earth.

Now, you can go out and read about the fine metal dwarf figures in Dwarven Dig!, but you should know that Kenzer & Company encourages all of us to do our part, too. So about a month ago, they were offering Dwarven Dig! without the miniatures, and you can simply recycle some of your own dwarf miniatures. I’m worried about our planet, too, so that’s the version of the game I picked up, and so I can’t tell you about the miniatures, because I’ve never seen any.

As with every worthwhile environmental effort, there are costs. The cost, in this case, is paltry – the game is not much fun. That’s a small concern when you think about the kind of planet you’re leaving for your kids. If you really feel a need to enjoy yourself while you’re playing this game, just ignore the rules and play it wrong. We thought the game was complicated and boring, but all we needed to do was ignore the rules, blow off the complicated stuff we didn’t like, and play completely out of sequence, and then we had a grand old time.

So do your part for your planet, and pick up Dwarven Dig! You’ll be able to play a game and save the Earth. Who cares if you’re not having fun?

If you're as worried about the environment as I am, you shouldn't be playing games, anyway. You should join these guys:
http://www.treehuggersofamerica.org/become_ahugger.php

KOTDT is what got me into Heroscape, which lead me to the BGG and collecting games so I have a soft spot for them, I also consider myself a tree hugger, but I think I may have to pass on this one. I to love all things Dwarven, but a boring game with complicated rules will just sit around, so thanks for funny review that is as always, very truthful.

Looks like DFlynSqrl didn't get the sarcasm in the post. I won't be looking for this game anytime soon lol

I found a great deal of helpful information above!
site