Game Expansion Review - ...And His Little Dog, Too 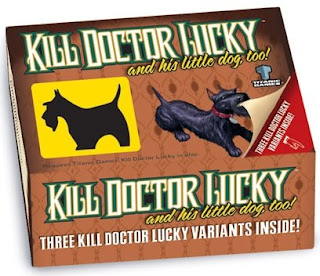 You're not a very nice person. Not only do you have a mad-on to kill a goofy old doctor who never did anything to you (and while you are creative, some of your methods are exceptionally rude), now you want to kill his dog. You're just plain rotten. The only way you could be any worse is if you plan to kill the dog with something really cruel, like a tight hat. Oh, wait, you do. You bastard.

A couple weeks ago, I reviewed the rather zany game Kill Doctor Lucky. About that time, I also got my mitts on Lucky's mutt, otherwise known as the expansion '...And His Little Dog, Too.' This isn't a whole lot of expansion - it's a wooden dog pawn and just enough extra rules to fill a 3X5 card. And honestly, it doesn't completely reinvent the game, either, or make it a whole new game, or otherwise alter the game in any seriously significant manner. However, it does help with the biggest problem I had with Kill Doctor Lucky - it helps the smart player win faster. Which means now it will take less time to be the biggest asshole in the room.

The game still plays the same way, but now there are three sets of alternate rules you can use to change how things work. One variant, called Old Dog, has Shamrock (Lucky's pup), following the old coot around, and if Shamrock can see the hapless soon-to-be victim, he barks and you can't try to kill him. So before you can kill Doctor Lucky, you pretty much have to kill his annoying dog. Only the dog is just as hard to kill as his owner, so the end result is that the game goes longer. But on the other hand, you can make more murder attempts, so the failure cards go faster and you get spite faster, so while the first part of the game (trying to kill the dog) goes for a while, the second part of the game (killing the lucky doctor) can go pretty quick. I hope you're proud of yourself, you scum-eating weasel. You would kill a dog just because he barks? You conscienceless animal.

The second variant, on the other hand, can really help a clever player. In this set of add-on rules (called New Tricks), Shamrock is just a really pissy little mutt. Every time someone tries to kill his master, Shamrock gets his back up - and earns a spite token. Only Shamrock is just a dumb dog, so he can't use his spite tokens. But if you can get in the room with him, you can give him a little scratch behind the ears, which calms him down and lets you steal his spite tokens, which you can then use to kill Doctor Lucky. So while you may think this makes you a better person because you're not trying to kill the dog, it might be even worse, because now you'll kill the master in front of the dog, and even make the dog help. You're worse than a lawyer who advertises on television.

The end result here is that a smart player will position himself to make buddies with the puppy, and accumulate a great big store of extra spite. It's not easy to make sure you get next to the dog, because you have to predict Lucky's movement before you can predict the dog, and since Doctor Lucky can calm Shamrock if they end up in the same room, Shamrock isn't always carrying a lot of repressed rage for you to steal. Take that, you heartless scum.

There is a third variant that comes with Shamrock, predictably titled Old Dog, New Tricks. It combines both other variants, but since I didn't really like the Old Dog variant, we just stick with the New Tricks variant. We may be evil, but we're not as evil as you are. We don't want to kill the lovable pup. You, on the other hand, intend to do in the dog with a shoehorn, but not until you've used him up. What kind of monster are you, anyway?

So basically, Doctor Lucky's little dog isn't a great big change to the game, but it does fix some problems if you use it right. Plus it's only eight bucks, so if you enjoy Kill Doctor Lucky, the dog is a good idea - for you, because you're a rotten crook who probably rips tags off mattresses.

Cons:
Can also make the game last longer, because it gets harder to kill Doctor Lucky
You suck

You heartless bastard. You might as well go here and get the dog, so you can kill him, too:
http://paizo.com/titanicGames/v5748btpy7x8i
Posted by Matt Drake at 3:53 PM

You're worse than a lawyer who advertises on television. ----- Say it isn't so.

Very funny review, I really enjoyed this one. I want to get KDL, and now I think this should go with it - thanks for the great review