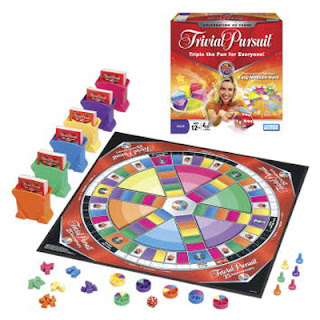 If you knew that the answer is Paraguay, then you either A) come from Paraguay or B) spent a lot of time in high school picking wedgies out of your ass crack. And if you're not from Paraguay and you knew that, you're also likely to do pretty well at Trivial Pursuit. And maybe Who Wants To Be A Millionaire, but I'm not reviewing fad TV game shows that somehow manage to drag on for years after anybody quit watching them.

But let's say you're not a total goober who can answer obscure questions about Egyptian politics from 200 BC, but you still like to play Trivial Pursuit sometimes. In that case, you need the 25th Anniversary Edition that just came out. Because if you're as ignorant of the world as I am, you can maybe get by answering easy questions. The cards in this edition come with six questions, and you get the question that matches your die roll. So if you rolled a 2 to get to that impossible Paraguay card, you might instead get asked what language most people speak in Paraguay, and Spanish is as good a guess as any.

The traditional six categories are still on the board. There's geography (I suck at that one), sports & leisure (I suck a lot at this one), history (again, I suck), arts & literature (you guessed it - I suck), entertainment (I only get these if they're from the 80s), and science & nature (yeah, I suck). But the beauty is, you can get easy questions, so instead of having to name a strain of Amazonian tree frog based on its distinctive coloring, you might get asked, 'what hangs out in trees in the Amazon and croaks and eats flies?', in which case, 'tree frog' is not that big a leap.

That's not the only change in the old classic. You still run around a circular board, trying to put wedges in your pie (that's not a euphemism, but it should be). You still roll the die, trying to hit roll again spots until you can try for a pie slice, and then you race to the middle of the board to answer some ridiculously difficult question that someone else picks out for you. But now, as you answer questions correctly, you move a second pawn around the bonus track. This isn't game breaking, but it can make it easier to win if you're as horrible at trivia games as I am.

For instance, if an opponent lands at a pie slice spot while your outside pawn is in the 'Face Off' zone, you can try to answer their question before them, and maybe get that pie instead of them. Or if you're in the 'Easy Cheezy' zone, you can demand an easy question, so that you are almost guaranteed of getting the pie slice you need. And the coolest part is, if you go all the way around the track, you get a free pie slice without answering a question!

Here's some useless trivia for you: I've never beaten my wife at Trivial Pursuit - until now. I got really, stupid lucky, and filled my pie (again, not a euphemism, but it should be) right before she did. She had to answer all her questions to get her slices, and I got both the Easy Cheezy question (for one slice) and the freebie (for the last slice). Then I beat her to the middle spot. I'm not proud of that win - she still knows WAY more than me - but it sure was nice to win Trivial Pursuit, just once.

If you always lose Trivial Pursuit because you play with people who know stuff about Emily Dickenson and the Treaty of Versailles, the 25th Anniversary Edition could level the playing field a little. If you do win, it will be a cheap, undeserved win, but who cares? It's a win. And those can be hard to find with Trivial Pursuit, especially if you know as little as I do.

Pros:
Shiny metallic box lid
Allows ignorant bastards like me to win at Trivial Pursuit
Still the same game that went on all night in high school because you played with a bunch of stoners, but now the stoners have a shot

Cons:
Purists will hate that dumb people can win now

If you want to finally have a shot at winning Trivial Pursuit, go here and get a copy:
http://www.hasbro.com/default.cfm?page=ps_results&product_id=22054
Posted by Matt Drake at 6:29 AM

WOW, you make this sound great, I was never impressed with TP simply because I felt the people who owned it played it a few times or read the cards and that made it unfair, or maybe I am just really stupid and didn't know enough answers. Sounds like this edition would level the playing field, I am way luckier then I am smart.

Thanks for a great review on this one!