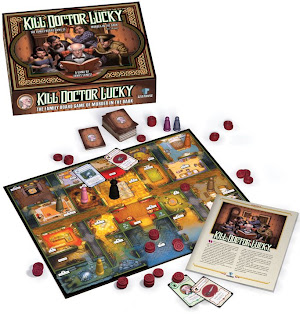 If you're an older reader, you may remember the wild antics of Mister Magoo, a crazy old coot who was a really decent soul, but was almost completely blind. He would befriend skunks and porcupines, accidentally capture jewel thieves, and somehow evade harm at every turn. His blind ass would stroll out into traffic and then miraculously time it so that every cement truck on the road whizzed right past, and whichever bad guy was chasing him wound up embedded in the grill of a passing ambulance. It was awesome, but I always wondered if he was faking. Nobody is THAT lucky.

When I play Kill Doctor Lucky, I'm reminded of Mister Magoo. Everyone in this game is competing to be the instrument of Doctor Lucky's demise, but the oblivious son of a bitch manages to go the whole game without being stabbed, hanged, burned, poisoned, bludgeoned or shot, despite the best efforts of all the players - until the very end. Because the game ends as soon as Doctor Lucky kicks the bucket, and the scheming fiend who drops him wins. So I guess at that point, his name becomes Doctor No-So-Lucky-After-All.

Doctor Lucky is not just lucky. He's a creature of habit. He roams a predetermined path around his mansion, moving from room to room, and you have to be in a room with him to try to off him. Plus you can't try to kill him if someone else can see you. So you have to lay in wait, hiding out, and then try to stab him with pinking shears when nobody is in your part of the house. And even then, he might pull a Magoo and bend over to pick up a dime just as you embed a fireplace poker in the back of the sofa. What the game needs is a really angry dog to chase him around, only the way this dude gets lucky, the dog would probably wind up stuck in the laundry chute with his furry butt on fire, trying to puke up a dish full of rat poison and kibble.

Every attempt on Doctor Lucky will earn you a spite token, so further attempts will have a greater chance of success. The longer he dodges rat poison and big red hammers, the more spite you build, so after a while, your chances of doing murder increase considerably. However, the other players are also earning spite for every failed murder attempt, and when you try to kill the old codger, the other players still get to try to stop you. They can play failure cards that distract you by making you forget whether a straight beats a flush, or they can burn their spite tokens to rob you of your desired vengeance. Only by overwhelming all the other players, planning a murder so devious that none of the other players can stop you, can you win the game.

Kill Doctor Lucky is an interesting game, but it's got some flaws. If you know how to win, you save up your spite, bide your time and wait for the perfect chance to hide behind the refrigerator and pop out to brain the doctor with a crepe pan. You build up spite a little at a time, and when the time is right, you throw down a murder plot so twisted that nobody else can stop you. You combine the right weapon with the right room, wait until everyone else is worn out from trying to save Lucky for themselves, and then strike. However, if nobody is playing smart, the game can stretch on and on and on, with Doctor Lucky living up to his name for hours at a time. You can't win by being lucky. You have to play clever, or the game isn't going to end for a very long time.

But if everyone is playing clever, being judicious with their countermeasures and quietly stocking up on spite and horrid weapons, Doctor Lucky can be a tense game of cat and mouse. The pieces are great, the board is gorgeous, the cards are hilarious, and the theme is brilliant. As long as you play with smart people who understand what it takes to win, Kill Doctor Lucky is great fun. But fair warning - your first play is likely to go on much too long, and if nobody learns the trick to the game, it's not going to get any better.

There are three variants to Kill Doctor Lucky that include his little dog, and hopefully they'll mix things up to make the game faster and a little less arbitrary. I'll let you know when I review the variants in a week or two.

Cons:
Tends to drag on a bit if you're not playing with the right crowd

Kill Doctor Lucky is an ingeniously deviant family game of killing a lucky old man. Paizo has it for sale here:
http://paizo.com/titanicGames/v5748btpy7ppe
Posted by Matt Drake at 10:10 AM

I have been looking at this one for some time, it sure sounds fun, but sounds like it may not be that great of one to teach to people if you are already good at it?

Nah, the best way to teach this one is show how it's done. They'll thank you on the second play.

it's sort of like Clue in reverse, fun game

I've been on the fence a while on trying to decide if I should get this game. Sure has had a lot of hype from Paizo. After your review it does sound like it would be pretty fun to play with my devious friends. Thanks!