Board Game Review - I'm the Boss 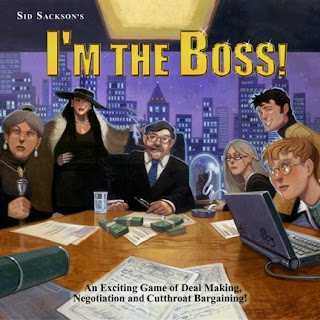 I know last Friday I said I was going to talk about Risk: Star Wars, and I hate to let down the two of you who actually pay attention, but I have to tell you about my new favorite game. I played it this weekend for the first time (I bought it over a year ago) and we loved it so much, we immediately played three more times right off the bat.

The game is called I'm the Boss, and it's not for the faint of heart. It's a game for people who don't offend easy (as regular readers might note, I do not). The level of cutthroat dealing in this game is so high, you'll hate your friends when you're done - but you won't be able to blame them, because you're doing the same thing every chance you get. And then the game ends, and you'll want to do it again, because you'll be desperate for the chance to stick it to the bastard who stole your only investor and left you holding your pecker.

In I'm the Boss, everyone is trying to make deals. There are 15 deals to be made, and each requires a different mix of investors. Each player starts the game with one investor, and you can recruit more as the game progresses. So say the deal is worth 10 million, and it needs Cashman, Goldman and Sacks if it's going to go through. Odds are, you've only got one of those people in front of you, so you'll have to split the take with the other players if you want to get the whole deal together. If the deal fails, nobody gets paid, so it's worth a little sacrifice to make sure you get your slice of the pie.

The thing is, everyone else wants to make money, and the game has plenty of ways to make sure you get your cut. Like you can recruit your opponents' investors, leaving them with no way to make a deal and you holding the balance in nearly any deal on the board. Or you can send investors on vacation and force the deal-maker to use your investor instead of Liebgeld, who has suddenly decided to go skiing in the Alps. Or you can just take the whole deal, making yourself the boss, and take the lion's share of the profits. You can't do this every time, and there are ways to stop you, but regardless, this is one game where screwing your opponents isn't optional. You either play for blood or you go home empty-handed. If you're prone to fits of mercy or pointless displays of compassion, you'll be happier playing something where you all play Catholic nuns handing out bags of rice to poor children in Somalia.

Ironically, the point of the game is not to harm the other players. The point is to make sure you get cut in on as many deals as possible. The thing is, only so many people can get their piece of any one deal, so if you don't get in there and fight dirty, you're going to end up with nothing. All your friends will laugh at you. You will be shunned, your confidence shattered, nothing more than a ragged shell of a human being. And all because you were too nice to steal the deal and get your piece of the pie. It's just a game, for crying out loud. Is it really worth your self-esteem and the admiration of your peers, just to feel a little more like a decent person? No, it's not. So cowboy up, you pansy, and send that old Dougherty bitch on vacation so you can take her cut. And don't feel bad, because your turn will come soon enough.

The game ends when a certain number of deals have been completed. It takes about 30 minutes to an hour to play a game, but the time will fly past, and you'll find yourself looking at a clock to decide if you have time to try it again, and this time, you'll remember to stock up on the dirty tricks early on to make sure you get your share when the real money starts stacking up.

For anyone who still needs a little incentive (and who hasn't left to go pick daffodils and play with little puppies while wearing a cute little jumper and maybe a baby pacifier), I'm the Boss is a creation of Sid Sackson. This old dude (well, now he's a dead dude) made a whole bunch of games before he kicked the bucket, and some of them are downright legendary. He made Acquire, which is another game with a financial theme, and Can't Stop, a crazy dice game that is one of Parker Brothers' all time biggest hits. Sid Sackson may be dead, but he's a legend of game design, and I'm the Boss proves why.

If you have the guts to play dirty, and skin thick enough to hold your water when someone cuts you clean out of a lucrative deal, I'm the Boss is a hoot. Merciless negotiation may not be for everyone, but for those who can enjoy a little stab-and-counterstab, I'm the Boss might be your next favorite game.

Pros:
Awesome negotiation
Hilarious hijinks (in the form of back-stabbing and deal-making)
Easy to learn
Great art by William O'Conner, one of my personal favorite illustrators

Cons:
Not very nice - Mother Theresa would not approve

If you've got the ballsack to play a game this mean-spirited, I'm the Boss is hilarious fun. Sadly, it's sold out everywhere. I can't even find one on eBay. So no link for you.
Posted by Matt Drake at 7:43 AM

Sounds like a winner to me, I will be looking to get this one!

So em, I had to ask, but could you please review the other game you where talking next week!

Um, no sir not Risk, you know the one with the cool theme :

Catholic nuns handing out bags of rice to poor children in Somalia.

That one sounds more like a Euro game then AT, am I write on that one? Or do you play the Children of Somalia and try and eat the nuns?

I don't even play Diplomacy. There's no way I'm getting this one.

I don't care for Diplomacy at all but really enjoy playing I'm the Boss. The problem with Diplomacy is that all the games I've played went way too long. This game is short and a blast! Highly recommended...if you can find it. Nice review, Matt!