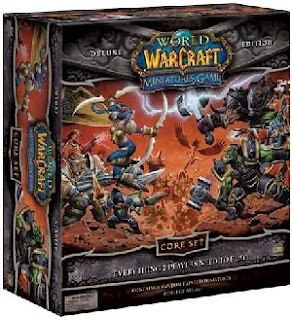 I wasn't going to buy this game. I swore I wasn't. Aside from the fact that it's incredibly expensive (it might be cheaper to collect sports cars), I don't tend to like collectible miniatures games. I don't mind expansions, but I generally like to know what I'm buying when I plunk down my money.

But a friend told me I should give it a shot, and I figured I could roll it into a review week. The people at Upper Deck weren't about to start sending some upstart web reviewer free boxes of their hugely popular and expensive game, so I just ended up dropping eighty bucks for a couple starters and trying it despite my better judgment.

You sure don't get much for eighty bucks, I can tell you that. I bought a regular starter and a deluxe starter, and now I have ten figures and a board, along with some dice so crappy they could have come right out of the old D&D red box. I'm surprised I don't have to color them with a crayon (actually, some of the ink fell out of the 7 on one of the dice, so now it looks like a 1, and I probably ought to break out the Crayolas).

And while we're talking about crappy stuff, let's talk paint jobs. You would think that with miniatures roughly twice the size of anything else in your collection, they could have at least thrown a wash on them. The last couple Mage Knight releases are prettier than some of these figures. Sure, they're detailed, but would it have killed them to dunk them in a little dark stain and pull out some shadows?

And the instructions tell me to insert these figures into the round U-bases (stupidest name for a game component since meeple - why should my figure base sound like a German submarine?), only every time I pick up a figure, the base drops on the table and I lose track of how much life my guy has. Stupid U-base (with a stupid name). I ended up just taking the figures off the bases and breaking out a bunch of poker chips to use as health counters.

So now I have ten figures (five Alliance and five Horde and no monsters, plus ten worthless U-bases) and I'm a little skeptical. The sculpts on these figures are great, but if this game doesn't have some serious game play, I'm going to be regretting this purchase in a huge way. The board is not all that impressive - apparently Tanaris is the boring map - and the customizable terrain tiles are all exactly the same. So I can make a whole lot of hills, or flip them over for a whole lot of ruins. Not really that pretty. Or customizable. Or interesting.

Fortunately, the game play is pretty easy to understand, so it wasn't too hard to test the game. And it's not like I'm going to have to spend hours building a party - I hardly have enough figures to build a good team anyway, so we'll just play with what we have, and not bother figuring out synergies and attack strategies and whatever else I want to see in a good customizable minis game.

The trickiest thing to grasp about the World of Warcraft CMG is the clock. Every character uses his U-base to track both his hit points and his personal clock (unless the figure falls off, probably because an English destroyer dropped a depth charge). And at the end of every turn, you advance the turn counter by one, and every time it matches the clock of a character in your party, that bruiser can act. Actions advance your personal clock, so if you do something spectacular, you'll be standing around for a while like an old man with Alzheimer's whose kids left him at the bus stop. This took a few reads to figure out, maybe because I shouldn't drink right before I start reading rules.

But then it starts to make sense. Every figure has a card with different abilities, and the really good ones cost a few more clicks of the personal clock. Instead of paying for abilities with tokens or beads or tapped mana, you pay for abilities by spending time. This suprisingly cool mechanic will make a good player wait now and then, timing his attacks to maximize their effectiveness. It's great to swing your weapon every chance you get, but it won't do you any good if all your backup isn't in position. And by reserving your hits for later, you can really wreak havoc while all of your opponents stand around wheezing for air.

Fighting is easy. It uses a lot of ten-sided dice (and there are not nearly enough in a starter), and has an exceptionally high rate of success. So there's definitely luck, but when you're rolling six ten-sided dice and succeed on a roll of 4 of more, the luck kind of works itself out. The dice do a better job of telling you how badly you hurt your opponent, rather than being an irritating all-or-nothing attack sequence.

And to really improve your strategic play, every figure gets two action bar cards, which let you cast spells and rush and buff and turn into a bear. These can be activated any time you want to pay for them, but once you use one, you have to wait until the end of turn 10 to use them again. This balances really well, so that you can't just rely on blowing all your resources up front for a quick win. The player that uses these cards better will probably win.

In perhaps the coolest army-building rules ever, you don't actually pay for your heroes. Take all the biggest, baddest dudes you want - but instead of paying up-front costs, you pay in victory points. If your army is huge and your enemy's army is tiny, you're going to have to slaughter him a whole lot of times, and he only has to get lucky two or three times. This works out fantastically well, because you don't have to worry about filler heroes or using up those last ten points. You just take what you want, and play it to win. (The game recommends limiting your figure count, because there's a point where no amount of luck would save a small army from a big one.)

After playing this a few times, I have to say, the game is pretty fun. I enjoyed it a bunch, and my wife even said she would like to play it again (a major score in my book - she never did like Heroscape, which caused me no end of sadness). It moves fast, and there are lots of great opportunities for strategy and tactics and planning and other stuff that makes a game fun for me. The minis could be better (like, they could be 28mm, for instance), but they could be a lot worse (like, they could be boring sculpts), and they actually look pretty cool on the board. In fact, I dare say the game is good enough to make me ignore the unfortunate scale decision, and the desperate need for a simple ink wash, and the bland game board, and the horribly irritating U-base (potentially full of Nazi sailors).

But it's not good enough for me to overlook the cost. No matter how good it is, I'm not happy about paying eight bucks per mini. I found boosters online that are fairly cheap, and bring the cost down to about 3 bucks a mini, but I still can't see myself sinking the hundreds of dollars into this game that it would cost to collect a whole big lot of them. I know I won't be completing any sets.

On the other hand, if anyone wants to trade off some spare figures, I feel certain we can work something out. I know I'll be playing this one again, and I'm glad to report that I'm not regretting my initial purchase at all.

Pros:
Excellent strategic and tactical play
Easy to learn, and yet the experienced player will still win more often
The sculpts are awesome
Extremely customizable

Cons:
Rather boring paint jobs hide the cool detail in the figures
Horrifyingly expensive
U-bases have stupid names and won't stay on

Even though the World of Warcraft CMG has some considerable flaws (mainly in production), the game itself is great. Thank Ryan for finding this link to cheap WoW CMG minis:
http://www.wholesalegaming.biz/worldofwarcraftminiatures/
Posted by Matt Drake at 9:32 PM

Upper deck pushed this game on us really heavily, and so did my distributor. They even gave me a free starter set to test it out about 2 months before it came out. We played it and had the exact same u-base problems. This frankly astonished me. But in end the real issue was exactly what you said. COST. The cost of the minis was prohibitive. And I'm a store owner, so it's all about 50% off for me, and I was like, no way. STILL too high. I sold out on my initial order (which was large) but haven't bothered to reorder. No one has asked me to. Not sure what that says about the game.

One of the reasons I think the D&D Miniature game died was cost. I started when boosters were $10.00 a piece for 8 miniatures. By the end it was $15.00 a piece, and that kind of inflation in a couple years was just too much. I'm sure it's expensive but at some point no matter how cool a game is, if it costs too much, the game will never succeed.

I was able to get nearly all of the first set in a really good trade. This is a very fun game (especially if you don't have to pay for it). But one thing I left out of this review - the scale is all over the map. Some human-sized people are like twice the size of other human-sized people, and there's a tiger in there bigger than any other figure in the set - including the giant ogres.