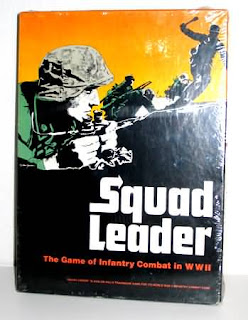 A guy at BGG Con had a copy of Squad Leader on sale for five bucks. I don't know how it lasted through Thursday and Friday, but when I saw it, it didn't last any more. I used to play the hell out of Squad Leader with my old man, and this set was in incredible condition. The guy had all the little cardboard chits separated in little cardboard cigar boxes, and there were two sets of boards in the box. For me, this was like finding Warhammer Quest at a thrift store and realizing that not only were all the pieces in the box, but none of the weapons had broken. Or like going out on a weekend and finding out that the bar you're in has dollar drinks and it's nymphomaniacal lady's night. I mean, this was a score.

The reason this was such a great deal for me is that this was one of the first times I remember thinking, 'there might be something to this gaming thing.' This isn't Advanced Squad Leader, with all the iterations and expansions. This is the orange box that I used to break out with my dad to spend our weekends shooting at each other and sending machine gun squads into hand-to-hand combat while other guys shot flamethrowers and chucked satchel charges through the windows. This was a walk down memory lane, and I couldn't believe my luck.

But to make this a review and not just a brag-fest about my killer find, I guess I could try to actually describe the game. In today's market, this is horribly outdated. There are cardboard chits instead of miniatures. The board is flat, and you really don't have much reason to want 3-D terrain, because it would just get in the way. Combat resolves on tables and charts, which is a mechanic that is almost universally reviled among modern gamers. The rulebook is more dense than a brick in bathtub, with tons of little rules and some really small type. In fact, looking at it after having played modern games with plastic miniatures, color rules and glossy game boards, Squad Leader looks like a dog that lost a fight.

But we played Squad Leader all the time anyway, because it was just plain fun. The turns were exceptionally fast. You can't stack miniatures, and there's something horribly intimidating about rushing a position where squads, leaders and support weapons are stacked an inch high. The maps are brilliantly designed, and if you're any kind of history buff, you have to be impressed by the accuracy of the scenarios. The rules start off slow - you play the introductory scenario with just squads, leaders and machine guns, and then add stuff as you go, until you're crawling under barbed wire in the middle of the night while tanks rumble through the streets and your radio man frantically calls in an air strike. And while the rules might be intimidating for a player used to full-color rulebooks full of extravagant art, they're still far less complicated than they seem at first glance. In fact, I've played modern games with rules that are a lot more confusing.

One reason Squad Leader is so easy to learn is because it is a simulation game more than anything else. It doesn't try to drop in fancy mechanics or clever card play. The rules make sense because they're based on real life. When you're firing into a platoon of charging Russians, it's not hard to remember to hold your fire until they're next to you so your machine gun can mow them down like a tornado in a trailer park.

The downside to the original Squad Leader is that it's kind of stuck between other games. It lacks the expansions and enormous player base of Advanced Squad Leader, and so doesn't appeal as well to hardcore wargamers. And being a cardboard-counter-slinging wargame, it's going to automatically repel 90% of your standard gamers. It's not that it's a bad game - quite the opposite, in fact, because I flat-out love it. But it can be tough to find players, because wargamers tend to gravitate toward Advanced Squad Leader and non-wargamers tend to avoid it like it was capable of performing acts of tentacle porn.

I don't care, though. I can play it with my son, and when my dad visits, I'll play it with him. I might try to hook a few of my friends - if these nerdy losers can wade through the rules to play Warhammer 40K, they can sure wrap their heads around Squad Leader. The historical accuracy, swift gameplay, great maps and fantastic tactics make Squad Leader one of my favorite games of all time, and if you don't dig it, I won't ask you to play it with me. But if you're ever in North Texas, drop me a line - I'll set up this game any time.

Cons:
All pieces are little cardboard squares that tend to get a little unwieldy
Rulebook as dry as chewing a mattress
Player base a little sparse

You're in luck - you can still get Squad Leader from Troll and Toad. They've got three copies:
http://www.trollandtoad.com/p129934.html
Posted by Matt Drake at 10:52 AM

Great review, not nearly as funny as your rant to come, but I am interested in this game.

How long is a typical game?

I had planned to play Advanced Squad Leader at one point, but never could talk any of my friends into giving it a try. Glad you could find a game you started out on. For me it was Tactics II and my Dad and I spent many and nights and weekends playing that game. Good times.

Good find, only draw back I can read from you blog is you state "there were two sets of boards in the box", a complete game has four. Still for five bucks no complaints and you can pick up the other boards easily.
Typically a game would last three hours.

I was just found my Squad Leader box buried out in the garage with everything in it and all four map boards, plus bonus I also found my Iron Cross box the first exansion module for Squad Leader. Know the much harder task will be to find someone to play with.

wow ... I had planned to play Advanced Squad Leader at one point, but never could talk any of my friends into giving it a try. Glad you could find a game you started out on. For me it was Tactics II and my Dad and I spent many and nights and weekends playing that game.

The downside to the original Squad Leader is that it's kind of stuck between other games.

I might be just a newbie, but it seems to me like Drake should have better filters in place.

Nothing to do with the review, or, indeed, Squad Leader.