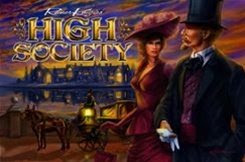 If you read my reviews on a regular basis, you've probably noticed that I really don't like Reiner Knizia. It's nothing personal (although his last name does kind of sound like a Polish pastry). I think he's a genius. But I also think that after some huge early successes, he's spent the recent years of his career trading on his name. He makes half-assed efforts at weak math games and sells them to major publishers because they can put 'Reiner Knizia's' at the beginning of the game titles.

So it is with great joy that I review High Society, a bidding game designed by Reiner Knizia. And before you get defensive about your personal gaming hero, I like it. I'm happy because I get the chance to prove that I can judge every game on its own, without bringing my own personal bias to bear (again, if you read my reviews, you know damned well that last bit is a lie - I'm all about personal bias).

High Society is not a big game. It's published by Gryphon Games, rising from the ashes of Eagle Games to put out a handful of light, easy games, and continue to sell all those gigantic Eagle games that hardcore gamers love to spend all afternoon playing (in fact, when Gryphon Games sent me a bunch of their most recent games, they threw in Age of Steam, which I'll review later - as in, after I blow an afternoon playing it).

In High Society, as with nearly every Reiner game ever made, there's a theme that's only slightly weaker than a Near Beer (I'm still not sure why Reiner puts themes on his games at all. It would seem a lot more honest to just call them all 'Math Game X', where X is the most recent math game created by Reiner. X is currently in the hundreds). So since the theme is almost entirely pointless, I'm not going to tell you what it is. Guess from the title, or go look it up, I don't care.

Each player has an equal hand of cash cards. There are a bunch of card-sized tiles, and every turn one will flip up and everyone will bid on it. Most of these are numbered 1-10, and the 10 is really valuable, and the 1 is... well, not. Then there are cards that double your score at the end of the game, and these are great, as long as you can grab a numbered tile or two before the game ends. Bidding goes around in circles, raising or dropping out, and only the winner has to pay. This is important - you may want to raise the bidding to break your opponent, but raise too far and you'll wind up paying too much. It's a tricky balance. It's like my good friend Kenny Rogers used to say - you gotta know when to hold 'em, and know when to fold 'em. Oh, and when to run away, but I don't think that applies to this game unless you're playing with your in-laws.

The real kickers are the three bad cards. These can make you discard a number card, cut your score in half, or just cost you points. You don't want these cards (which, unless you're stupid, you could figure out on your own). There are only three of these, and the bidding works the same way - except that the first person to fold takes the card and keeps his cash, and everyone else has to pay. If you can afford to bleed your opponents, this is an excellent way to make someone else throw away all their money. But if you're not careful, one of your opponents might just accept the calamity, and then you end up paying when you're probably already short on cash, and then instead of being all clever, you end up with egg on your face (which may or may not be an improvement for you).

The game ends when auctions finish for all the score doublers and the score halver (is halver a word? I don't know. Someone industrious can go look it up, if you want, and then criticize me for my weak grasp of my mother tongue). At this point, everyone totals up their scores - but there's one more poke in the eye. If you're the person with the least cash left in your hand, you're automatically out. That's right, you could have the winning score, but if you left yourself bankrupt, it doesn't matter - the math police come and take away all your points, letting someone else run off with the win while you have to play Atlanteon and that horrible Lord of the Rings game that Reiner made for kids.

The end result of all this tricky bidding is a really tense and strategic game of high-stakes bidding. Not every round is crucial - until the game ends and the player who grabbed at the cheapest card winds up beating you by one point. You can't afford to go all in, ever, and you can't afford to let the really big fish swim past. So you have to bid up when the good prizes are out there, because if you let someone snatch the hot cards without a fight, they'll have plenty of ammo left to beat you down later. Even the seemingly weak cards are important, because every round is an opportunity to either score or cost someone else some money. You won't know the winner until the last hand is over.

In the end, High Society is a quick, fun bidding game with a theme more watery than American beer. It's amazing how much tension can build in a game you can play in twenty minutes. But the greatest thing about High Society is that when you finish, and you just barely wound up in second place, you'll want to look at everyone else and go, 'rematch, bitches.'

Pros:
Very well-designed and tense
An amazing amount of strategy for such a short game
Rules are easy and make sense
Really quick game

Cons:
Completely pointless theme (which should go without saying - it's a Reiner game)

If you want a lot of game crammed into a short period of time, get yourself a copy of High Society right here:
http://www.eaglegames.net/ProductDetails.asp?ProductCode=GRY006
Posted by Matt Drake at 8:33 PM

This game has traditionally competed with For Sale as the auction filler of choice. I owned High Society and really enjoyed it. Then I read about For Sale and how it was the best++. So I traded one for the other.

What a mistake. For Sale is so ultra quick and with few tough decisions. High Society makes you feel like you actually played a game. For Sale is more like sitting around watching a TV in a doctor's waiting room.

Despite not being pleased with FRED's business practices and component quality, I will check this version out.

Sounds like a fun, quick game but it sure is expensive for 68 cards and a rulebook. Thanks for the review, Matt.

Oopps...looks like 71 cards. Well, that made all the difference in the price then! ;)