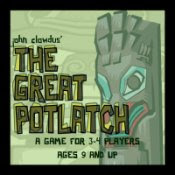 It's amazing what you can learn playing board games, even when they're not educational. Like when I played Ten Days in Asia, and found out that you could walk from Turkey to North Korea in just three days, or when I played Senji and found out that Japanese warlords used to swap wives like a Rodney Dangerfield joke. But the most educational lesson of all came from The Great Potlatch, where I found out about... well, the great potlatch.

A potlatch is a Native American thing where these families would get together and give each other gifts, with the families actually competing to see who could give away more stuff. The overall idea was to redistribute wealth a little bit (and no, Obama did not think of it, and neither did the people who hate Obama and latched onto one phrase so they could call him a Communist). At first, I thought this was bogus, but Wikipedia says it's totally true. Another site says it's something about an ultimate frisbee tournament, which was also interesting, but that doesn't really relate to the card game very well.

Now, that may seem like a lot to do in a game that comes in a cloth bag the size of a cow scrotum, but a few very cool rules make it work. First you've got the actual potlatch ceremony. Every day, you'll choose a few cards to give away. You can give away as much as you want, as long as there are little matching symbols. The guy who gives away the most comes out smelling like roses, and everyone else gets a little bad rep. This part is simple, really, and doesn't even count for scoring, aside from that dose of bad reputation (but as my good friend Joan Jett is fond of saying, I don't give a damn about my bad reputation). Mostly this part gives you first pick of roles in the next round.

The roles are really the meat of the game. Every turn you pick from three roles, and you don't want to pick the same thing as the person who picks first (you can, but there's a penalty). The elder can make offerings to the ancestors. The carver can use those offerings to make a totem. The shaman can burn up potlatch gifts to perform rituals. Different elements in here get you different bonuses, and I could go way into this, but honestly, the rules will hurt your head the first time you read them, so there's no way I'm going into them right now.

Several elements make this a really tricky, really cool game. For starters, every potlatch card has three different parts to it, useful at different times. The potlatch swap-meet uses the symbol at the bottom. The elder's ancestor gifting uses the ones in the middle and the top, and the shaman uses the top part. So if you've got six cards, and four could work to make a totem, but you'll need three for the gift-a-thon, and you want to keep a couple for the shaman's ritual thingy, you have to balance them all and figure out what to use where. Screw this up, and you'll blow your whole turn and feel retarded. Do it right and you'll be able to gloat, which as we all know is only slightly less awesome than hearing the lamentations of your opponents' women (see Wednesday's review).

Another killer element is the balancing act of the different parts of the game. The potlatch section gives you a chance to dole out a little bad rep and sieze control for the next round, but if you put all your efforts into that part, you won't have the heat you need to work with the elder. If you don't work the elder this turn, you won't get to use the carver next turn, but if you don't grab the speaking stick you may not get the chance to be the carver. Every part of the game is important, but you can't do them all at once, and it takes some real presence of mind to be able to compete across the board. Sometimes, too, you just don't draw the cards you need, and then you're hosed anyway.

Now, I gotta tell you, there's a downside to making a game with rules this original. That downside is that, until you're about halfway through your first game, it makes no sense whatsoever. I mean it's more confusing than trying to rewire your entertainment system after the cable guy installs a converter box, or trying to assemble your new outdoor grill using only the Spanish section of the instructions and the crappy pictures drawn by some Chinese fourteen-year-old using Microsoft Paint and a roller ball mouse.

But once you play through the game once, you'll see that it's actually freaking brilliant. You'll want to play again, if for no other reason than because now you know how. It's a bitch to teach to other people, but it's awesome to play with a group of people who have played it before. The delicate play balance and kick-ass production (as always, everything is hand-made by John Clowdus, except the cards, which are printed in America) makes The Great Potlatch the kind of game that should be in every gamer's closet. Unfortunately, Clowdus only makes like fifty or so at a time, so every gamer can't have one, and if you want one, you better hustle your ass up and buy it.

Seriously, you need to get this right now. Don't wait.
http://www.smallboxgames.com/tgp.html
Posted by Matt Drake at 11:01 PM

Excellent game and review!! I agree that the full concept of the game doesn't snap until about half-way through the first time and then it becomes evident how great the design is.

This sounds like a great game, too bad it's only 3-4 players. Our weekly gaming group usually ends up being 5-9 folks and we're dying to find some new games that are for more than 4 players.

man you said that about Dirge and it sold out, not again, oh well, this one sounds Awesome, great Theme!

Cool review, I might like to check this game out at some point. Though honestly I'm not sure I know much more about it than I did before reading... It's got cards which have multiple uses, and it's "really neat." Other than that, until I actually maybe see the game or read the rules I guess I cannot comment.

Regarding the ultimate frisbee tournament you mentioned, now that I CAN comment on. Potlatch is the biggest co-ed frisbee tournament in the country, and it's a ton of fun. If you're in the Seattle area and are interested in frisbee at all then you probably already know about it. I go up to Seattle every year to play, and I usually stick around for a week and try to get some gaming in on the local scene.