Board Game Review - Raise the Ruins 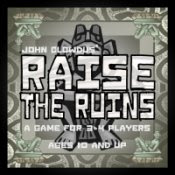 There's a little history here. Earlier in 2008, Small Box Games released Temple, which I reviewed and pretty much didn't like at all. I wasn't alone in not liking Temple, and it didn't sell for crap. So Small Box Games was stuck with a pile of games taking up garage space and stinking of bad game. But you can't keep John Clowdus down - he took the cards and pieces from Temple, then went out and made a whole new game.

Raise the Ruins is composed almost entirely of pieces scavenged from Temple. There are a few additions, like temple cards, but everything you need to play Temple comes in Raise the Ruins, except the board and rules, and John tells me that pretty soon, you'll be able to download those from the Small Box site pretty soon. I can't imagine why you would want to do that, but you could. If you're so inclined, you can also come paint my bedroom or wash my car. You know, as long as you're doing stuff that isn't very much fun.

So right off the bat, Raise the Ruins might seem to have a strike against it. A game constructed from pieces of another game's corpse might seem destined to disappoint. It probably won't reanimate, kidnap a little girl and then run off to the North Pole, but it still might suck. To decide whether or not Raise the Ruins comes to life, or just lies on the table after the lightning strike, we put it through a set of rigorous tests.

OK, the tests were not that rigorous - we just played it. And then I asked Clowdus about a few rules clarifications, and he revealed that there are some updated rules. So it's not like we hooked the game up to a heart monitor, but I think we tested enough to make up our minds.

Raise the Ruins has a deck of cards, some other cards, a couple more cards and some markers... which you put on the cards. Players can do two of three things on their turns - draw cards, woo the gods or work together to raise a temple. Sucking up to the deities and trying to finish temples both use the cards, so you'll be constantly balancing between your need to get cards and your desire to use them. There's also a really cool Puerto-Rico-style element where you do one thing twice, then everyone else gets to do it once, then you do one more thing. It makes it critical to plan your moves, because you could end up doing more favors for your opponents than you do for yourself.

The game goes pretty darn fast. You'll blow through your turn in minutes flat, then wish you had just one more thing you could do. You might need more cards, and want to steal a god from someone else, or have enough resources to make something happen, but be out of actions. There's an excellent mix of planning and flexibility here, and yet you still aren't going to end up paralyzed by decision-making.

The cards are nice - in fact, the temple cards are almost glittery. The art on the deity tokens is really small, unfortunately, so we frequently had trouble telling the tusk-face god from the hair-dude god or the corn-chick god, but it's not like that really slowed the game any. I actually really dig the art on these cards - they're very thematic, in what is quickly becoming a recognizable Small Box style. Even with the little bitty god pictures, the game is fun to look at.

So after the lightning hits, this reanimated beast actually comes to life. And unlike its fictional counterpart, it doesn't turn on its creator and then get chased off by a crowd with torches and pitchforks. The rules you get with the game have a few problems, but the revised rules fix all those problems and then some. If you already have a copy of Raise the Ruins, you really need to download the new rules. John has assured me they'll be on the site soon.

I guess recycling from the gaming graveyard can work. In fact, if it works for games, it might work for my horribly misspent youth. I think I'll go back and see if any those girls I was too scared to flirt with are still around. Hopefully my wife won't come after me with a torch and a pitchfork.

Cons:
Rules have a few problems, so you'll want to download the updated rules, once they're up

Like every other Small Box game, your window for buying a copy is limited. If you want a copy of Raise the Ruins, hurry up and get it before they're all gone.
http://www.smallboxgames.com/rtr.html
Posted by Matt Drake at 7:24 PM

If you have Temple can you play this game with some extra compenents?

Sounds greae, like you I really wanted to like Temple because of John making it, but it was just kinda OK, the one version I really actually almost disliked , and this is a game we are talking about.

There are several components in Raise the Ruins that aren't in Temple, like the twelve temple cards or the deity tokens. So unfortunately, you'll still have to buy Raise the Ruins if you want to play it.