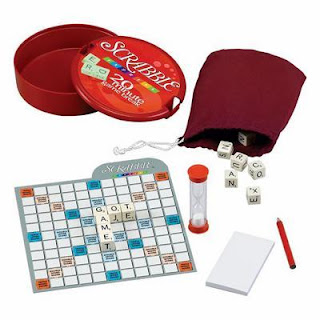 If you read my reviews of Monopoly Express and Sorry Express, you can probably guess that my hopes for Scrabble Express were not all that high. I figured it would be something with a tenuous connection to the original, something insipid and shallow, something where the value of the container was higher than the value of the game. I admit that my expectations were damned low when I popped the lid on Scrabble Express and read through the rules.

But this isn't like those other Express games. Because Scrabble Express is... wait for it... still Scrabble. I know, I was surprised as you are. Probably more, because you probably don't really give a fart in a whirlwind and just read my drivel to see if I make a good joke about retarded kids or monkeys or something.

It's not exactly like Scrabble, mind you, or you couldn't finish it in twenty minutes. You won't find a big box of tiles that are all going to get lost or stolen by hoodlum teenagers to spell out crude phrases for oral sex or noisy body functions (you know what I'm talking about - don't pretend you didn't do it yourself, when you were 13 and got dragged to Grandma's house to watch her 50-year-old black-and-white television while your parents pretended they still liked the old broad so they wouldn't get written out of the inheritance). Instead there are a dozen dice with letters on them. Every time it's your turn, you'll roll seven dice and use the letters you roll to spell words on a miniature fold-out Scrabble board, complete with triple-word and double-letter scoring spaces. Then you'll leave your word, remove any other dice, and the next person rolls. It goes pretty quick, and like actual Scrabble, it takes a few turns to get to the high-scoring outside spots.

The problem with only ever having one word on the board is that in some cases, the same letter will get used over and over. Like if you have the Qu die on a double-letter score, just spaces away from a double-word score, everyone is going to be doing their level best to use that Qu, which means it will stay in play until someone scores 60 points for one word and the game ends. Since you're only playing to 200 points, it only takes four or five turns to win the game using such a tactic, and it feels a little cheap (though it's still a damned site better than having the game end before you get to take a second turn, which can totally happen in Sorry Express).

And Scrabble Express is a lot less portable than the other Express games. Sure, it still fits into that completely awesome round container, but you'll need a little space to set up the board. We played Monopoly Express in an airport waiting for a plane, but Scrabble Express turned out to be a little trickier without a table. We managed it by putting the board on top of my carry-on luggage, but we still ended up chasing a couple dice past a couple college kids trying to sleep off their weekend.

But Scrabble Express still has a lot going for it, even if it is a little tough to play while you're flying coach (but then, if you've been on an American flight in the last year or so, you know you can't even play rock-scissors-paper in coach any more. They've got us crammed in tighter than a factory-farm milk cow). In some reviews, I try to explain who would like the game by describing turn order and game length and stuff. This is easy - if you like Scrabble, you'll like Scrabble Express. It's Scrabble, and you can play a whole game in ten minutes, and you can take it anywhere. So if you hate Scrabble, you know to save your money for a nice mani-pedi, and if you love it, you'll want one to play in the RV when your over-optimistic father decides a family vacation to the Grand Canyon sounds like a good idea.

Pros:
Same great package as the other Express games
Plays really fast
It's just like Scrabble

Cons:
You could see a lot of words with X in them
It's just like Scrabble

Of all the Express games I've played (and I sure wish I had Risk Express), Scrabble Express is the best. You can get one here:
http://www.hasbrotoyshop.com/ProductsByBrand.htm?BR=547&ID=20405
Posted by Matt Drake at 6:23 PM

Risk Express? That sounds awesome! Get on it, man!