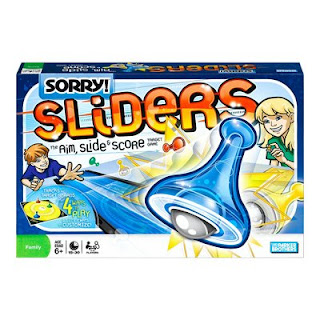 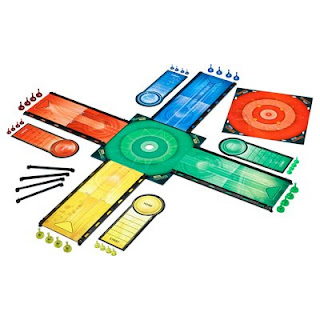 I like to laugh. It's one of my favorite things to do. I like hearty chortles, raucous roars, and malicious giggles. And that's why I like Sorry Sliders, because after playing it for an hour, my stomach hurts from laughing, and since I smoke too many cigars, I also cough up half a lung (that part is not as awesome).

Sorry Sliders is a brilliant game. It's simple, and you can play it with anyone old enough to know not to put the pieces in his mouth (or that weird cousin who still puts stuff in his mouth, so don't play with him, either). It seems like it would be too simple, until you start playing and realize that it's actually more fun than the grown-up version, which is played extensively by old people on cruise ships.

The board can be configured in lots of different ways, but the overall idea remains the same - slide your pawns down a ramp and onto the scoring pad, trying to land close to the center spot for more points. You're also trying to knock your opponents' pawns into low-score zones, or better yet, off the board completely. Score enough points, and you can move your score pawns (which are not the same as the sliding pawns) and try to get them Home. Once they're home, they're safe, but if one of your sliding pawns goes off the board (or if your hand goes over the foul line), the unprotected scoring pawns can go back to the starting line.

That's it. One paragraph, and you understand the game. I'm not even kidding - those are all the rules. So why on Earth does this game make me laugh until I pee? Is it even possible for a grown man to enjoy a game so obviously made from children?

Hell yes it's possible. It's hard not to enjoy this game. And riddle me this - if this is such a kid's game, how come there's a variation of it in bars all over the world? That's right, because it's damned fun.

But just being fun isn't enough to make me bust a gut until my eyes water. Otherwise, I would laugh myself retarded every time I played Rock Band. No, the reason this game is so downright hilarious is because it's so incredibly easy to screw up.

Take my son, for instance. We're playing a variant (there are four in the box) where if you drop your pawn into the center hole, it's as bad as falling off the board. This isn't easy to do, mind you - the hole is only slightly larger than the actual pawn, and lots of times they just end up perched on the edge. And yet, eight times in a row - eight times - he put his pawn in the hole. I was laughing so hard I almost fell over.

Or when my daughter is about to win the game - she's got three score pawns Home and the last one perched within scoring distance of the winning circle. She needs just one point to win, and all her sliders are out, and she's got that point. The only way she won't win is if I can knock one of her sliders off the board, sending that last scoring pawn back to Start. So I line up the shot, toss my slider - and my guy bounces off one of hers and sails clean off the board. This is hilariously awesome (irony kicks ass), and I start laughing, and then I notice that the pawn I hit ricocheted off another pawn and knocked one of hers out, too. And now I'm shrieking with laughter. I think I peed a little.

The whole game is like this. Unless you're playing with really boring people, Sorry Sliders is light-hearted, vindictive hilarity. You'll chuckle when you manage to bump someone out of the lead position. You'll giggle when an opponent pushes your pawn into a high scoring spot. You'll chortle with glee when an opponent manages to knock every single pawn off the board at the same time, and you'll fall out, holding your stomach and gasping for air when someone at the table manages to blow a commanding lead with a horribly clumsy move.

You can finish a whole game of Sorry Sliders in anywhere from five to twenty minutes, depending on the variant you're playing. You can set it up in a few minutes, play in less than half an hour, and clean it up and put it away in less time than it takes my son to announce his urgently full bladder when there's work to do.

There's an easy test to see if you would like Sorry Sliders - breathe on a mirror. If the mirror gets cloudy, go here and get the game:
http://www.amazon.com/Parker-Brothers-40615-SORRY-Sliders/dp/B0017RUGWW
Posted by Matt Drake at 5:09 PM

I have heard only good things about this game, ot sure sounds like a fun game, if you had that much fun withe kids I bet it would make a great drinking game with the mates!

This sounds very similar to a game I learned over 20 years ago, but have since forgotten. Great review.

Good luck with the incontinence. ;)