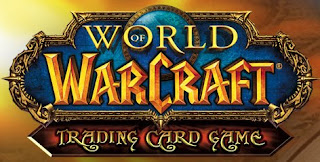 I don’t tend to get caught up in collectible card games. It’s not that I don’t think they’re fun – quite the opposite, in fact. I remember the early 90s with Magic, and thinking it was the coolest thing ever. At one point, I had every single Doomtown card up through the Mouth of Hell expansion. But I tend to avoid getting into card games because when I do get really into a new CCG, I have to cut back on my crystal meth.

So I was hesitant to play the World of Warcraft TCG. I got a free starter at GenCon 07 and never even opened it. The last thing I needed was another reason not to pay my bookie. But then some friends started playing it, and all I heard was that it was a really fun game. At that point, I was actually relieved I had dumped that first starter.

In retrospect, that was not a good call. When my curiosity overwhelmed my common sense, I ended up having to buy the very same starter I gave away at GenCon a year and a half ago (well, not the exact same one – I bought a new one). And then, because I meant to review the game, and you can’t really write about a collectible card game without having a good selection of cards, I bought another two-player starter and a box of boosters. There goes this month’s budget for hookers.

It gets worse, too. If the game had sucked, I would have been relieved. I could have shoved all the cards into a box, sold the rares on eBay and lived happily until another siren call of cardboard crack pulled me back in. But no, the game has to be all brilliant and fun and crap. GREAT. Now I’m never going to be able to afford my cocaine addiction.

The thing is, the World of Warcraft TCG doesn’t even do anything that original. It’s pretty much stock formula CCG stuff. You’ve got instant cards, and attacking and defending and a health counter and a bunch of other stuff you’ve seen before. The game is basically a brawl between two heroes, who may or may not hurl direct-damage spells at each other and may or may not hire hordes of allies to assist in the beatings.

One reason that the World of Warcraft TCG is going to cost me some drunken binges, though, is that you get dozens of ways to build a cool deck. You can be a mage and do massive direct damage without lots of allies. You can be a druid and use abilities to make your hero an impressive killing machine. You can be a hunter with lots of pets popping up all the time. You can create hordes of cheap help, or get just hire a few tough guys and boost them over and over. You can build fast decks, or slow decks, or tricky decks, or solid decks, or whatever you want – and that’s just with three starters and 24 boosters. I can’t wait to see what I can build with all the new cards I just bought on Amazon (I wasn’t doing so well with my off-track betting anyway).

Another reason I’ll be squandering my kids’ college fund is because the game play is really smooth. It can be tricky the first time, but you’ll learn it fast, and then it comes easy. That’s not to say you’ll be an old pro, just that you can figure out pretty quick how to do what you want to do. It’s intuitive, and even if you’ve got a complicated series of maneuvers, you can finish your turn surprisingly fast.

Now, I will say this – I’m a little disappointed in the continuity of the game. The last time I got really hooked into a CCG, it was Doomtown, and I was almost as interested in the developing storyline as I was in the game itself. If there’s an ongoing story in the World of Warcraft TCG, I haven’t seen it yet. I guess that’s what you get when your theme starts with a gigantic online video game. The TCG is a solid game, but I just don’t get the feeling that I’m playing out a story. I’m just playing out a couple of goobers beating the piss out of each other. Not that I can’t have fun doing that, but I do love a good story, and it’s kind of surprising to me that I am enjoying the game so much when there’s a rather weak backdrop.

But then, I probably wouldn’t care about the lack of story if I played the video game. Fortunately for my budding heroin habit, I really don’t like those MMO thingies. If I did play the game, I would probably be really thrilled by the card game. But if I were into the video game, I wouldn’t have time to play cards anyway.

And to really make me overlook any story issues, the World of Warcraft TCG has several additional reasons for me to give up Thai hookers and opium – raid decks. This is the most original thing I’ve seen in collectible card games in a long time. It’s a pre-built deck full of bad guys, and one guy plays that deck, and everyone else plays their decks. It’s like a cross between Descent and a card game. In fact, I think raid decks deserve their own reviews, so I’ll be talking more about them another day.

With incredibly flexible deck-building and smooth, nuanced game play, the World of Warcraft TCG is a good reason to give up some bad habits. Hell, I’m never going to have money again. At least, not until I go back to rehab.

Cons:
Not a great continuing saga
You’ll have to get a second mortgage and quit feeding your kids

I never really went to rehab. That was a lie. You can go here to get some cards:
(really long link to Amazon)
Posted by Matt Drake at 3:27 PM

So this is why you never got around to reviewing Geek Fight. :P Oh well, next month has a ton of new stuff coming so you need to get the full experience before you review it. I'll save you some. I need to bribe you somehow. jk

To be honest this looks like a great game, but it came out right after I made the jump from mainstream to indie CCGs. I have so many friends that love World of Warcrack, and I just backed away slowly after watching them give up sex with their extremely hot girlfriends to finish an instance (true story!).

If you need to feed the addiction, I've had good luck ordering from this site: http://www.wholesalegaming.biz/worldofwarcraft/

As for the game itself, I really liked it a lot when I first played it too. One shortcoming was that the large number of classes available and not allowing off class cards in your deck meant that you often ended up with many cards you couldn't use. A problem with most ccgs though.

Geek Fight is still in the hopper. I've had this WoW stuff since before Christmas, but wanted to make sure I played and understood all three before I started a theme week.

Ryan, thanks for the tip on the cards. God knows I need a cheap way to get my fix. Retail would murder me. And you're absolutely right about the card distribution, but we like to make new decks all the time, so we've used nearly all the cards I have so far.

I played WOW as well, it was fun in the beginning when everything is new. I actually was very relieved that they found a way (Just like VS system) around the Magic resource management trouble.. Until I found out that if you do not get your curve right, it seriously can damper your game.. that´s why I jumped off the wagon.

Got to admit, the Raid decks are very cool and will probably find their way into my game as well (hopefully)

Played a couple games with a starter or two. Felt exactly like a fixed up Magic. The Raid deck idea is pretty cool though.

As for story, no one could beat Alderac at that - L5R, Doomtown, LBS all had awesome story tie-ins.

Dude, enjoy some tasty drinkage (I have some Jimmy Beam and Bass Ales in my fridge waiting for me to get off work), but let the kid go to college!

The game sounds way better than I would have imagined. I went through a Magic TG phase in the late 90's, and I still love Mythos and play a friend occasionally, but I think only another game with great customization would appeal to me. Seems like WOW has that customization, but there is only one thing holding me back from checking it out further - I don't know anyone who would want to play it with me!

Does this have any appeal to people who don't play Warcraft? I do play RPG's on playstation, but I just can't imagine playing card games based on any of them, even the allmighty Final Fantasy 7.

I do wish I had a chance to play Doomtown. That one looked hella cool.

I don't play the video game, and my family and I are playing the hell out of this one right now. I've bought three of the raid decks, and plan on getting the fourth.

The warnings in these comments have been very accurate, by the way. If you have a particular kind of favorite deck, you're going to wind up with a lot of wasted cards. Which I will be more than happy to take off your hands.

If you would like to take the game for a spin before you buy it, there's a sample downloadable deck at the WoW TCG site. It won't tell you anything about card distribution or.. well, much of anything, but it will let you take it for a spin and see if it's for you.

Man, talk about wasted cards. I have maybe 4 favorite decks still from my MTG phase years ago, leaving me with 4 long white boxes of extras. I know there are probably valuable ones that didn't make it into my decks lurking int there. But just the thought of having to sort all those cards to sell, trade, give away, or even just organize is too daunting a thought.

Just looked at some sample WOW cards. I would have been afraid the cartoony look of the computer game would not tranlate, but they actually look pretty good.

Thanks for sharing such a great experience here. By the way World of warcraft is an interesting game which I like most. I use to review the various world of warcraft Leveling Guides to improve my levels of the game.