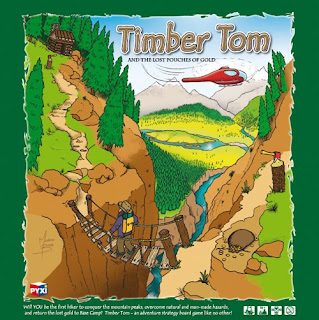 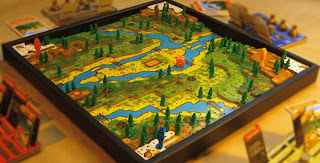 There's a big school of thought that says that a game is good or bad based solely on the rules, that components don't matter and a game can kick ass when you play it with pieces of paper and random bits of broken glass.

Timber Tom does not belong to that school of thought.

Usually when I talk about a game, I start with the theme, then discuss the rules, then make crude jokes that make you feel dirty when you laugh. Somewhere in there I'll talk about the components, probably as sort of an afterthought, like, 'the theme is fun, the rules are good, here's a joke about hookers and blow, oh, and the pieces are nice.' It's sort of a formula, and it's worked for me so far. But Timber Tom is different, and so before I tell you all about how you run around a mountain and plant trees and call in artillery strikes, I'm going to tell you about the pieces.

I'll start small. There are a bunch of cards in the game, and they're printed on the kind of stock usually reserved for very expensive Euro games. There are also some little figures, all sculpted to look like cartoon mountain men, kind of like the ones that Bugs Bunny tricked to dress like girls and hit each other with their blunderbusses. The figures are also very nice.

Then there are all these little plastic bags of gold and barrels of supplies. These are super nice, and if the game stopped there, you would have some really nice components. But if that was all, I wouldn't spend three paragraphs discussing the components.

When you see the foam-padded, custom-cut storage tray, you'll be impressed. There's a place for everything, even a little square cut-out where you can stuff the die. But to really appreciate the awesome factor here, you have got to see this board. It's three-dimensional - not like the Game of Life, where you have a flat board with some plastic crap to make little kids think it's a toy. It's a full-on topographical map of a valley surrounded by mountains, with all these little holes to stick your hillbilly hikers and all the trees you'll plant as you travel. It's jaw-dropping, and the only way the publisher can afford to make this game as cheap as he does is because you can only buy the game direct. If the game went through normal distribution channels, it would cost you eighty bucks, easy.

So all these pieces go together so you can play out the hunt for Timber Tom's hidden treasure. Old crazy Tom hid bags of gold at the tops of four different mountains, and you'll run around the mountain trying to pick it up. This is no roll-and-move game, though - most of the time, you'll know exactly how far you'll move on your next turn, because except for flood zones and blizzard-stricken mountain peaks, your move is based on where you start your turn. Easy foothills let you move six, while steep mountainsides limit you to four. And you have to move your entire move - no fair stopping at two spaces just so you can take a nap at the cabin.

At first glance, Timber Tom doesn't seem like a particularly strategic game. But then you add in the trees. Just about every turn, you'll plant trees to impede the progress of your opponents, and the only way they can move through them is to use their axes - only you only get so many axes, and if you want more, you have to stop at an out-of-the-way cabin. You could skip the whole thing and use the helicopter to move you around, but you only have so many helicopter trips before you're stuck hoofing it, so you may want to save the chopper trips for when you really need them. And you have to watch out for flood waters, and broken bridges, and bear attacks, and lots of other stuff, and all the time you have to manage your supplies, because if you run out, you can't climb the mountains, which means you can't get the treasure, which means all the other kids are going to laugh at you, and the mean kids will knock your books out of your hands and steal your girlfriend.

There's actually a surprising amount of strategy in Timber Tom, which is nice. When my kids saw the game, they said, 'oh, please let this be a good game.' It would be such a waste to have this amazing board and fantastic pieces if the game sucked. But happily, the game is a whole bunch of fun, and the board just makes a good game an amazing game.

Timber Tom does not reinvent the gaming industry, or break out with amazing new mechanics unlike anything you've ever imagined. The real gold here is not on top of the mountains. The real reason that Timber Tom is a treasure is because it's a damned fun game with some of the most amazing aesthetics you'll ever hope to see in a game, and those aesthetics actively improve the gaming experience to the point that it would not be nearly as awesome without them.

But there are not actually any artillery strikes. I lied about that. Sorry. Oh, and your mom's a tramp.

Timber Tom is gorgeous and fun and easy to play with your whole family. You can get it here:
http://www.timbertom.eu/
Posted by Matt Drake at 9:55 PM

Good day! You some form of knowledgeable? Nice message. Can you tell me easy methods to subscribe your weblog?