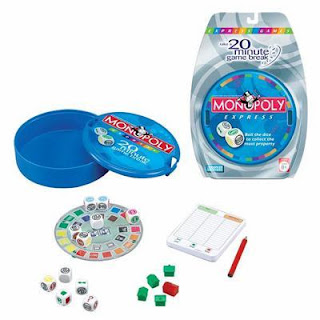 Hasbro is the biggest game publisher for a good reason – they have good ideas and make them happen (it might also have something to do with slightly ruthless business maneuvering, but we're giving the benefit of the doubt). They appeal to gigantic audiences, identify problems, and offer reasonable solutions at acceptable price points. Of course, that means they don’t have any good dungeon crawl games, and their idea of a European game would be selling Heroscape in Belgium, but they make a buttload of money, so that’s something.

The cool idea I’m going to discuss all week is the Express game. See, what Hasbro did was say, ‘man, these games are cool, but they take a long time and normal people have the attention span of drunk fourth-graders.’ So they made a bunch of games that are super-short, portable versions of classics. Tonight will be a review of Monopoly Express.

If you want to play Monopoly, but you only have twenty minutes, then you’re screwed. You can’t play Monopoly in twenty minutes unless you have some brilliant plan for throwing the board up in the air after nineteen minutes (you know, to give you a minute to clean up the mess). And the game won’t be very much fun, because after twenty minutes, all you’ll have is a few properties and a big wad of cash. That, and a handful of irritated players who only got to play for a few minutes and really wish if you were going to pull out a game, you would pick something you could actually finish, and not throw the board into the air.

Of course, there are other things you could do in twenty minutes, like drink a fifth of tequila, but you may not be able to go back to work when your lunch break is over, so a game could be a way better idea. And if you want a quick, fun game, you could try Monopoly Express. Now, I’ll be right up front here – the Express version has virtually nothing at all in common with the full-blown version. It’s a dice game, not a board game (though there are people who would say the same thing about regular ol’ Monopoly), but you can definitely finish in twenty minutes.

You take turns rolling this huge handful of dice. The dice show colored circles with scores in them, or pictures of train cars or utilities or policemen. You roll and try to get groups of the same thing, like two dark blues, or three pinks, or four trains. You pick the dice you like, put them on the little round board, and then decide if you want to roll whatever’s left. Because if you get three policemen, you’re busted, and you get no score at all for your turn. It’s not really original, or anything, and it’s nothing like Monopoly, but it’s fun, and has the added benefit of being palatable to your co-worker who normally spends every lunch break talking about golf.

You get more points if you can finish groups, and you can get houses that might get you even more points. The first person to 15,000 points wins the game. It’s not particularly deep, but if you want to play a game in twenty minutes and still have a good time, this will do it.

One thing that makes Monopoly Express especially cool is the packaging. It comes in a round plastic container with a snap-top lid, and once you take the game out of the package, you can roll your dice in the ready-made dice bowl. Now that is handy. In fact, the whole thing is so small and portable and self-contained that you can take the game on vacation and play on the bed while you sit naked in your hotel room with the hookers you picked up on Bourbon Street. Because no matter what anyone else says, that’s a kick-ass geek fantasy if there ever was one. It might even trump Princess Leia in slave gear. And it’s all made possible by Hasbro’s brilliant package design. Any game company that makes games that go well with French Quarter whores is OK by me.

Basically, Monopoly Express is a dice game with a Monopoly theme that you can play on a smoke break. It’s not a board game, it’s not a deep game, and it’s not a geek game. But it’s fun, and you can play it with your co-workers, and you can fit it all back in a fanny pack. Try doing that with Monopoly.

Cons:
Nothing like actual Monopoly (might be a positive, depending on how you feel about Monopoly)
Not very engaging, all things considered
A little on the shallow side

If you want to play a quick, fun, easy game, Monopoly Express is pretty cool. You can get one here:
http://www.hasbrotoyshop.com/SearchResults.htm?PG=1&CDT=1232239762
Posted by Matt Drake at 9:11 PM

Monopoly Express is actually almost 20 years old. My wife enjoyed it as a child under the "Don't Go To Jail" name. She was excited when we broke it out for the first time and she realized that it was a re-release of a child hood favorite.

Anyway, sounds like they were targeting 10-minute attention spans back then too.

"Any game company that makes games that go well with French Quarter whores is OK by me."

The above statement is why Matt Drake is a genius!!

Looking forward to your reviews of the other games in the Express line.