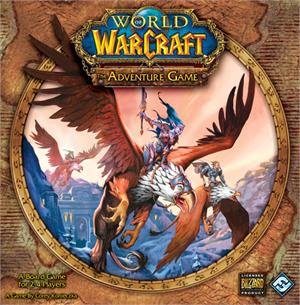 WoW Adventure Game is kind of like Runebound, in that it's almost exactly Runebound. You wander around, you fight bad guys, you get treasure, and you try not to get killed. You level up, you get stronger, you get more bitchin' gear, and you explore the world. So far, this is Runebound, but with a Blizzard license.

But there are differences. For one thing, the Runebound board is a really pretty overland map with a cool hex grid, while the board in WoW Adventure Game is a bunch of trails that connect circles, and it looks like it was crapped out by an artistically inclined brontosaurus. Runebound lets you pick from a huge stack of characters, and the WoW game gives you exactly four to choose from. Runebound has very straight-forward, basically sensible rules, and WoW has some weird crap that will take you two read-throughs to understand. The placement of discovery markers is almost absurd. The resource tokens aren't a bad idea, but they're poorly executed. There are only four characters in a game that would play best with six.

A huge difference - and one of the only two places where WoW outshines Runebound - is the quest system. In Runebound, you're all racing to defeat one guy. In WoW, on the other hand, there's a big deck of quests, with different points for completing each one, and you win when you get eight points. This means you're not four people trying to do the same thing, which is nice, because now you're not all hustling around the board trying to recruit enough allies that you can throw them away when you finally get up the nerve to face the big red dragon.

The biggest difference between Runebound and WoW, though, is the ability to punch the other players in the junk. Where Runebound almost ends up being a solitaire game that six people can play at a time, WoW provides ample opportunity and motive for attacking, slowing, and otherwise irritating your opponents. In fact, many of the character abilities focus on causing harm to your fellow players. Blocking an opponent in WoW means more than just taking the encounter they were after. Now it means putting a bomb in their underpants drawer to slow them down long enough that you can run up and jab them in the eye with a sharp stick. That's a lot more fun, and let's face it, a far more hilarious picture.

Unfortunately, when I consider these two elements that I like about WoW, I don't find myself wanting to play it again. Instead, I find myself trying to figure out how to add quests and more player fights to Runebound. In any way that really matters, Runebound is just plain way better than the WoW Adventure Game. The rules are easier to follow. The combat is more engaging, and actually requires a little strategy. The theme plays out better. Runebound takes the WoW Adventure Game outside and beats it until it cries, then steals its lunch money and pushes it into the girls' bathroom.

For me, the WoW Adventure Game is an exercise in wasted potential. The character interaction could make this a really tense game, but they would be fantastic with six people... only the game gives you just four. The quests would add a lot of diversity to the game, and more replay value, if only you didn't have to wade through all the anti-climactic battles and pointless token placement. And when I play a game just for the theme, call me a spoiled little artiste, but I want it pretty. I don't want it to look like a two-year-old painted the board with the contents of its diaper. Why bother giving me all these cards with cool art if you're going to dump this bucket of hospital waste and call it a game board?

Basically, the World of Warcraft Adventure Game comes to the table with some cool ideas, drops them and then wanders away to pick its nose. If you want to play a game that's a lot like Runebound, just play Runebound.

Cons:
Tweaky little rules all over the place don't seem to go together
Butt-ugly board
Not enough characters to play
Like Runebound, but not as much fun
Great ideas with crappy execution

If you want a game like Runebound, just buy Runebound. You can get it here:
http://www.funagain.com/control/product/~product_id=015142
Posted by Matt Drake at 3:40 PM

die in a fucking fire.

Sweet. I have fans.

You can get more characters for this game, just buy the character expansion packs. I know its kind of lame, but whatever. You could also just photocopy the other characters cards and give them a button as a playing piece - after all, theres more than 1 undead priest in the real World of Warcraft, so you could have more than 1 here too.

But really, I think you just love Runebound. I've never heard of Runebound and I quite enjoyed the WoW board game. At least enough to play it a second time. ;)

Nice post. Thanks for sharing the post here. By the way I like playing the game World of warcraft which is an interesting game. I use to review the top 3 World of war Craft guides which are helpful to move from one level to another.

Men I play the entire saga of world of warcraft, and I have say that my favorite was the wrath of the lich king, ahhh I miss my old character Malfegor my LV32 undead rogue.