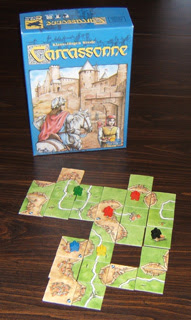 Meeples do not have it good. For one thing, they're not even people. They're meeples, which is like sheeples, except that they can't even follow. They just have to go where they're told and then stand there and try to be productive.

Take Carcassonne, for example. In this game, the meeples don't have any say over their jobs at all. They get stuck farming, even if they always wanted to be monks. The knights might have always wanted to be hairdressers, but they got stuck guarding cities when all they ever really wanted to do was sing showtunes and fix hair, probably because their fathers pulled some, 'no son of mine' crap and made them feel bad about not taking up the family business.

Carcassonne is especially bad to its meeples. Every turn, a player is adding a new tile, which might have city parts, roads, cloisters, or little towns at crossroads. Then a player can put down a meeple, and just by where the poor bastard gets parked is how he knows what he does for a living! Like say you drop a meeple on the road - now he's a thief, a brigand, a highwayman, and he never had any say in the matter. Society made him what he is, and society will punish him, and no matter that he was raised by his stepmom because his old man was always off drinking and whoring. Put a meeple in a growing city, and suddenly he's a knight, and it doesn't matter if he had a scholarship to art school. Drop him in a field and he's a farmer, and now he's stuck tilling the earth until the end of the game!

To make matters worse, Carcassonne throws these poor meeples into a job, and then once they produce something, once they're finally getting the hang of it, they get fired! It's not even remotely fair. As soon as the city is completed, the knight guarding it is laid off and returned to the player who placed him. Once a cloister is surrounded by well-kept tiles and lush green farmland, the monk who made it all possible is sent back to his player. Finish a road segment, and the thief you've assigned to plunder that road is sent packing, probably off to be a ward of the state. And what have these meeples done to warrant joining the ranks of the unemployed?

They made you money! These meeples are unwaveringly loyal. As soon as you complete the city, surround the cloister, or cap off the road, the meeples that you have placed in these locations gather all the points they have earned for building a big city, developing the countryside or haunting a road and deliver them to you. And their reward is to be removed from the growing countryside, placed on welfare and made to sit through Oprah and The View.

You should be nicer to those meeples. You've only got so many of them. If you make them all farmers, you won't get to see them again until the end of the game, when they will make you money by selling their produce to the cities close to their farms. You won't get to ask them if they would like to join the clergy, or give them a sword and assign them a city. You won't get to invite them to Sunday brunch or have them over in the summer for a backyard cookout. And when you've got no meeples to put on roads or churches or cities, when you've assigned every meeple to an uncompleted task and you have no way to take advantage of those huge ripe fields overflowing with riches, you'll have only yourself to blame.

Then comes the end of the game. The last tile is placed, the countryside is completed, and everything is scored. Every meeple you've got on the board collects whatever money he can, even if he has not finished his job, and brings it to you. And does he get to stay in this lovely world he's helped create? No! He simply hands over his points to you, then dives into the box, only to be followed shortly after by the country he's helped create! The tiles are all dumped into the box. The world is destroyed, and the meeple is homeless. No gratitude is given to these champions of commerce, these tireless workers, these little wooden warriors.

Of course, the meeples don't need thanks. They love you, and in return you push them around and take their jobs. Won't anyone think of the meeples?

(Oh, yeah, this is a game review. Carcassonne is fun, lots of tough decisions, maybe a little simple for me to play on a regular basis. But at least Reiner didn't make it.)

Cons:
A little simple for me, but lots of people just plain love it

If you want to abuse some meeples, you can get Carcassonne at this link. Hell, the meeples will thank you for giving them something to do.
http://dogstargames.com/product/RIO170
Posted by Matt Drake at 7:04 AM

Oh, even better, you can get meeple stuff to further exploit your meeples.