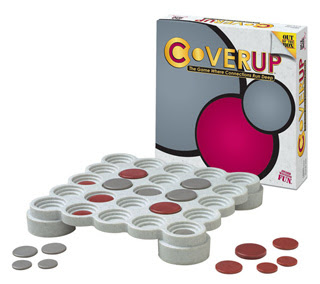 Remember when games were simpler? When rules could be explained in seconds, games could be played in minutes, and there was no setup time? I remember that time. I called it fourth grade.

And when I was in fourth grade, our games were simple. I wasn't retarded enough to think tic-tac-toe was a challenging game, but I loved Connect Four. I never did see the point of Cooties, but I could still get a kick out of a good fart joke.

When I played Coverup from Out of the Box Publishing, I was instantly hurled through my past to a time when I could not understand Othello, and when I inexplicably liked the taste of that horrible paste we used with construction paper. Coverup is so simple to learn and play that you can give the game to a couple idiot savants (otherwise known as children) and they'll occupy themselves for as long as it takes you to walk out of the room. Of course, as every responsible parent knows, as soon as you leave a couple eight-year-olds on their own, someone will get something lodged in his or her ear.

Happily, the pieces in Coverup don't seem to be small enough to put in your ear. There are a bunch of little discs in three different sizes, and a tray meant to hold them. The tray is a five-by-five grid with holes... you know what? There's a picture. Look at it.

Anyway, you have to get four in a row to win. Only it's a little tricky, because when you think you blocked someone, they can just drop a new piece on top of your blocker, and then you'll feel stupid for not blocking it. Or they can move one of the big ones after they put it down, and not only do they reveal the piece underneath (if there is one) but they might be able to complete a string with that extra piece. These subtleties may be overlooked by anyone with the kind of attention span required to enjoy most Nickelodeon cartoons, but the neat thing is, adults can play each other at this game and still be challenged.

Obviously, this isn't going to be one of my longer reviews. You can mostly tell what the rules are by looking at the pieces. The game is so intuitive that you can teach it in the time it takes your average third-grader to eat a booger. It's quick enough to let you blow through a dozen games, and deep enough that you don't mind playing twelve times in a row. And the greatest part? You're teaching your little trained monkey of a rugrat spatial skills or forethought or perception or some retarded thing parents always pretended they were teaching us when they were really just giving us something so we would shut up long enough that they could discuss their soaps.

I kind of wish there was more to this game, but that's really because of how much I like to say disparaging things about children. For what it is, Coverup is great. Casual gamers can enjoy this one with no warm-up period, and kids will love it. Adults can find enough depth to stick around a while, and the little Ritalin junkies that keep climbing on the back of your couch just might stop screaming long enough to do something besides get pizza sauce on the ceiling.

Pros:
Really easy to teach
Quick to play
Surprising depth
A lot more fun than I thought it would be

Cons:
Not enough to write about, so I had to quit making up bad things to say about children

If you've got kids, or just easily distracted adults, they might appreciate it if you go here and buy Coverup:
http://www.otb-games.com/coverup/index.html
Posted by Matt Drake at 3:03 PM

So that explains a whole lot --- you where one of the kids that Ate Paste!


How does it compare with connect 4? more complex?

Coverup is definitely more complex than Connect 4, but not by enough to be intimidating for kids.