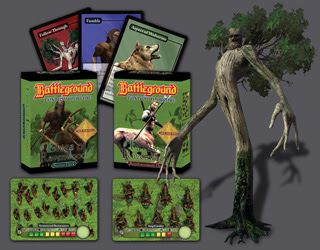 Around summer of '06, a guy in a game store mentioned a game to me. "Hey," he said, "this game is pretty cool. You should check it out."

Now, I'm always ready to hear about a cool new game, so my interest meter turned on.

My interest meter dropped way off. Ooh, how original. Mass combat in a fantasy world. Why is every third game trying to be Lord of the Rings?

Now I was actually starting to figure out how I could get away. You know when a really avid nerd corners you in a game store, and you start wondering if pulling a gun and shooting out the lights would get you out the door? It was like that.

For the love of all that is holy, I had to get out. I like the concept of a miniatures game, but I hate using a tape measure to play games. And normal game nerds are bad enough, but it was starting to look like I was trapped by one of those Warhammer nerds. Those guys make normal game nerds look like jet-setting secret agents.

BAM! Just like that, I'm back in. More than anything, I was curious. Intrigued, even. All the fun of a miniatures game, but without having to paint your figures? And what kind of mechanic can you use to simulate figures with cards?

I wandered away from the nerd, leaving him still talking, to get online and find out more about this game, get a few starters and try a couple games.

Battleground: Fantasy Warfare comes in decks the size of your standard CCG starter. There are a bunch of troops in every box, and every box is a different army. You've got your Tolkien standards - dwarves, elves, orcs, humans - and a few D&D standards like undead and lizard men. Plus there are tribesmen, which are just about the only non-derivative army type. Every kind of army also has a box of reinforcements, which are basically more of the same guys you get in the starter, with one or two additional specialty units.

Building an army is the standard point buy. Really impressive units cost way more than smaller units, everyone has the same point cap, blah blah blah. If you've never built an army, why are you even reading this? Go read about My Little Pony or something.

Now here's the part where this is different - each card represents a unit of soldiers. Instead of having to spend $80 and two months painting an army, the entire thing is right there in a nice top-down rendering. And this card thing gets better, because it lets you do all the accounting right on the card.

See, the cards have a really decent laminate on them, and you can write on them with a dry erase marker, then wipe it off when you're done. There's a little circle for writing standing orders and little boxes at the bottom for marking damage. You don't have to keep a roster or accounting sheet or anything else - it's all right on the table. Yet another point in its favor - no need to bring your notebook to remember what all the units can do.

The rules are a little different than some other miniatures games. Instead of just pointing at your guys and saying, 'this guy moves there, and that one goes there, and these guys stand and fire, and these guys are all pissed about getting latrine duty so they're going to stop and smoke a joint before they do anything,' you give each unit a standing order. The orders are Hold, Close and Range, and cover most of what you probably want a unit to do. But if you get lazy here, you could wind up with your archers closing into melee combat, or your heaviest hitters standing around in the middle of the field going, 'hey, the boss said stay here, we'll stay here.' You can add modifiers to the orders, to tell units to seek out particular units, or move to a certain point and defend it, or shoot only at one particular group.

Each player, on his turn (could be a her, but that's not likely, so I'm not saying 'her' any more), gets three commands, which can be used to invoke special army powers, change standing orders, or the most likely action, draw command cards. Command cards are special cards that let you make your troops fight better for one fight, or move faster, or defend really well, or whatever, and they're fairly powerful, so if you can hand out good standing orders, you can build a pretty good hand of these bad-ass cards and really lay down some smack.

Moving is easy, too. Instead of the tape measure (which I hate), you measure movement in card widths. A slow unit might move one long side of a card, while a fast unit might move three short sides. You don't have to wind the tape around obstacles and have it knock down everything just to make your move, which makes moving pretty quick.

The rules for Battleground are too long to run down in detail. Suffice to say there are good rules for routing, reducing effectiveness over troop loss, and other stuff you may want to do. The reinforcements decks contain rules for adding terrain, so you can even rumble over creeks and hilltops and forests. There's a lot here, and it's a pretty deep game.

Now the downside. When your troops get ready to jump into face-to-face fisticuffs, the rules get wacky. Not bad, but not easy to interpret. You might slide your card a little to one side to line up with another card, or move it to fit the center point, and before you can move you have to determine which guy is closest, which can be tricky because it's not always the guy who is closest. I would have loved to see these rules distilled down to something clever, but you're going to see the same kind of thing if you play Epic 40K, so I can't complain too much. My kid and I both thought it was a pain, but not nearly enough to keep us from playing.

Now, the thing is, miniatures gamers tend to like their games because the field looks like an actual battlefield. These hard-ons paint hundreds of figures in meticulous detail, build ruined buildings and grassy hills and paved roads and all manner of madness to make their battles look like little stop-motion movie scenes. And when you're representing those miniatures with playing cards, and forests with green construction paper, you kind of lose some of that representative feel.

But I did mention I'm not usually a minis gamer, right? I think those little battles look neat, but I don't have enough time in my day to try to build a scale model of Waterloo. And I'll be dipped in hog manure if I'm going to paint 100 miniatures just so I can make it all look realistic. So the lack of tactile interaction means nothing to me. I don't care if I can see the shading on my orc warrior's codpiece. I don't even care if I can see my orc warrior's sword, as long as I can still take the damage bonus for it.

Which means Battleground: Fantasy Warfare is just about perfect for me. All the fun without all that annoying building and painting. Good, solid rules, attractive cards, reasonably quick games, and best of all, it won't cost you a car payment to buy all that metal.

So the game store nerd was right. I'm glad he pointed the game out to me. I'm also glad I've never seen him again.

Cons:
Not nearly as pretty as an actual miniatures game
Closing rules are a pain in the ass

If you're intrigued, it's really cheap to check out the game. Hell, you can play with just one starter deck, as long as you're into fratricide. Go here and get some:
http://www.funagain.com/control/category/~category_id=SERIES_10125
Posted by Matt Drake at 10:02 PM

Nice Review! The standing orders mechanic seems like it would represent the "fog of war" pretty well. I've heard there will be a "Historical Warfare" version coming out soon....should be interesting.

I wanted this game before, after your review it has become a must have in my collection. Thanks as always for sharing.

How long does a standard game last ( I know it is by points, so there typical point game - how many points, and how long for a game more or less? )?

The art is a bit of a turn off.