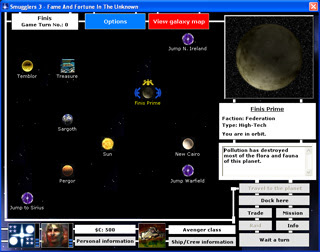 I don't usually like to play games on my computer. I like to sit on my sofa with my feet on the coffee table, directing bloody destruction with a wireless controller. I mostly use my computer for working, not gaming.

But I recently heard some buzz about independent game developers, and the idea intrigues me. People make these games on virtually no budget, with teams of like one or two guys, and by all accounts, some of them are pretty good games. And not those crappy Flash games you play on the Internet - these are actual video games with stories and characters and everything.

Of course, they're not big-budget shooters. Halo 3 isn't going to come out of a studio with two guys and a dev kit. In fact, most of these indie games aren't even action-oriented. Take Niels Bauer Games, for instance. The company is in Germany, and when I wrote for review copies, the guy that got back to me was Niels Bauer. That's like if you call Wal-Mart and get Sam Walton, except that Niels Bauer, evidently, is not dead.

Niels Bauer Games makes a few games, but their big hot-shot game is called Smugglers 3. This game series has won several awards for being a good game from an independent studio - apparently the awards people are so impressed when indie games don't outright suck that they give them medals.

Smugglers 3 is a space game. You buy a ship, put some guns on it, fill the cargo bay and head out to conquer the universe. The galaxy is at war for much of the game, and you'll be running across pirates all the time. You'll trade goods, and if you're good at it, you'll make a ton of cash doing it. You'll have to make a lot of money if you want to really advance, because at some point you'll get weary of delivering four boxes of Jujy Fruits and want to carry a 52-crate collection of illegal weapons.

At regular intervals during the game, you'll get into fights with other space ships. These ne'er-do-wells will be enemy fighters, pirate cruisers, or even peaceful ambassadors of goodwill that you attack to score a ransom. And when you get into one of these mid-space throw-downs, you'll play out a moderately tactical, slightly strategic, and completely unattractive space battle that is essentially you repeatedly selecting the button that reads 'shoot your weapon at the bad guy.' So it's not that exciting, really. The space combat part could have been a LOT more interesting.

As the game progresses, you'll get older, and the game will remind you that you're aging. You'll get promotions and what-not, and your list of medals will grow, and at the same time you'll see photos of your character with grayer hair and a receding hairline. I heard a rumor that if you play long enough, your character has an oxygen mask and a bottle of Geritol, but I retired and quit the game before that happened, so I can't verify that one.

The interface for the game is fairly intuitive, but in my opinion, not intuitive enough. For instance, I couldn't figure out how to save my game the first time, because you have to dock and go into a spaceport to find the save and load functions. Hiring crew requires a visit to a bar, and if you didn't know that, you could try flying your Paladin corvette-class starship around by yourself.

The graphics could have been a whole lot better. The buttons look like they came off an e-commerce site selling generic vitamin supplements - just plain text in a gray box. All the illustrations are 3D renders, though those are fairly decent. The star map leaves a lot to be desired, in terms of visual interest - mostly just black with dots. Combat isn't even that thrilling to look at - your radar is a green box with a circle in it, showing how far off your opponent is.

But if you want high-end graphics, go play an Xbox game. When your indie game got made by one guy working nights after his IT day job, you're not going to get some Gears of War graphics overload. You play indie games because you want to see games where people still put some feeling into their work, where they put a ton of effort into making sure the game works smoothly, not looks like a million dollar budget.

And Smugglers 3 manages to pull that off. At first glance, this might seem like one of those games you can download from Yahoo and that has a 1-hour time limit before it sticks out a hand for a $20 bill. Some of those are pretty decent, but this game is for serious gamers, not 12-year old kids who don't care if they download viruses to their moms' computers. Smugglers 3 has an incredible amount of depth - every piece can be upgraded, from weapons and shield to cargo holds and jump drives. There are five different kinds of crew members, from officers to robots. There are hundreds of planets with consistent economies, complicated warring factions, penalties and rewards for illegal activity, and inherent dangers floating around in deep space.

If you're an old-school gamer like me, you might remember an old game called Wing Commander: Privateer. This game combined the best of smuggling and carrying cargo with upgrading your ship and fighting space battles. Unfortunately, Smuggler 3 takes half of that interesting combo and sort of drops out of the other half. The trading and ship upgrading is better than Privateer, but the space battles are not interesting at all. As a guy who likes games with body counts, it's disappointing when the violence is the least interesting part of the game. I can appreciate a turn-based tactical game more than most gamer nerds, and would have loved to see a lot more depth in the space fights.

But even if the space battles aren't that awesome, I still look forward to playing Smugglers 3 a lot more. I want to see if I can get married and make the Federation promise me my own planet. I would love to be the guy who puts an end to the war, and I really want to make admiral. I want to command a huge ship with hundreds of crew members and four missile bays. There's so much to do in Smugglers 3 that I really want to play it a lot more.

The nice thing is, you can try out Smugglers 3 for free. Most indie games will let you take them for a spin and kick the tires, because it's not like they have a big advertising budget. You can try the whole thing, from interstellar trading to sadly dull space battles yourself, and see what you think. And if you like it, you can get the game for an easy twenty bucks. There's even a cool add-on to the game that lets you get drunk and married for just fifteen dollars. It's like Vegas, but even cheaper!

One final commentary on Smugglers 3 should put across my opinion of the game - I lost about four hours of sleep last night playing it. I've never had Halo 3 be that addictive. I've played Baldur's Gate that obsessively, and I went almost start-to-finish on Fallout in three days, but I can usually remember to go to bed. I literally fell asleep playing Smugglers 3, and then woke up and played some more (which would explain why this review is a little late). And now that the review is written, I'm going to go play it some more.

Pros:
Tons of stuff to do
Cool career mode
Lots of depth and decision-making

I'm not going to tell you to buy Smugglers 3, but I definitely think you should download the demo and try it.
http://www.nielsbauergames.com/smugglers3.html
Posted by Matt Drake at 7:11 AM

I haven't played Smuggler 3, but if you like this style of game I highly suggest checking out Escape Velocity by Ambrosia Software:

Great game. It has all the trading/quests/ship upgrades that you mentioned in Smuggler 3 although it doesn't get into the personality side of things. Combat is fun from what I remember. Well worth checking out and they have both Mac and PC versions.

From what you've described, particularly regarding hiring crews in bars, the character aging and development aspects, it sounds like this is a game that owes a great deal to Sid Meier's Pirates! both the original and the impeccable remake. That being said, it instantly gives me an interest in trying the demo, as Pirates! is one of my top five games of all time, if you include both the old and new versions. By the way, love the blogs, particularly on Car Wars and Risk: Black Box.