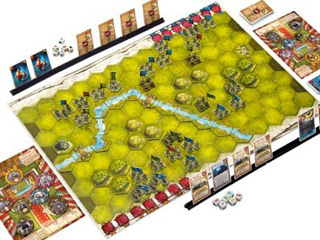 Richard Borg is not just my favorite game designer, he's one of my favorite people, period. If the guy were any nicer, we would name a state after him. He's modest, hard-working, friendly, approachable - hell, he's Andy Griffith. All he's missing is a podunk accent and a funny story about football.

But you probably didn't come here to read about Andy Griffith. You're here to find out if you ought to buy Battlelore, or if you already have, to see if you agree with me. But I like writing about Richard Borg, because, as I may have mentioned, I think he's a pretty cool guy. If you don't like it, stuff it in your ear. It's my blog, and I'll write about Richard Borg if I want to.

Battlelore is the most recent in a long line of very successful games called the Commands and Colors games. Before this one, there was Battle Cry (a Civil War game), C&C: Ancients (Romans and Greeks), and Memoir '44 (World War II). These games all share similar traits, but each has rules that make it unique. They all sprang out of Borg's idea for a single game system that could be customized for several different eras. That, and he needed a way to keep Barney Fife out of trouble.

In all the games, the board is split into three flanks - left, middle, right. You get cards that tell you which units can get commands, based on where they are on the board. You have special dice that tell you if you hit. Your units are composed of multiple miniatures (or in the case of Ancients, wooden blocks), and as your units take damage, you lose miniatures (or blocks). And all the games are pretty damned popular, because they're pretty damned fun.

The C&C game system works amazingly well. Turns are fast, strategy is crucial, tactics are key. Luck plays a pretty serious role, which can make some gamers unhappy, but at the same time, the better player wins more often than not. There's enough luck so that you're never too upset about losing, but not so much that you can't enjoy winning. Every now and then, even Opie can win a game.

The real strength of the C&C system, however, is its flexibility. Basic changes in the rules can completely alter the way every game feels. Antietam has a completely different feel from Normandy, and neither feels like Agincourt. But you still know how to play the game, because the basics are the same. So what I'm trying to say is, Richard Borg is not just great company, he's a frigging genius.

Battlelore takes the entire C&C system and kicks it up a notch. Battlelore is intended to serve dual purpose as an historical recreation of some of the battles from the Hundred Years' War and to let you play out crazy fantasy battles. In order to facilitate the fantasy stuff, Battlelore gives us a separate deck of cards, called the lore deck. You build a war council with wizards and clerics and thieves and warriors, and then your lore cards let you use those guys to blast your opponents with fireballs, sneak attack, heal your units, or just fight better. Lore points limit how often you can use these abilities, and their power depends on the council you build. A really great wizard can be helpful, but you won't be able to use thief skills very well. Get a little of everything, and nothing is all that powerful.

So there again, Richard Borg is brilliant, even if he doesn't know how to make pie with Aunt Bee.

Then Battlelore gives us these great critters. Giant spiders, earth elementals, hill giants - these bastards can completely ruin your opponent's day, and they let you recruit some huge hitters that can be tough to kill and still maintain some game balance. The creatures have special abilities, like the spider's web or poison, that can make them worth their cost.

Battlelore also emphasizes the importance of holding a line to prevent routs by giving bonuses to units who are adjacent to two other units. It's hard as hell to make a supported unit run away, and even worse, if they don't run, they get to hit back on your turn. More than one great charge has been undone by losing an entire unit on your own turn when a supported target battles back.

Now, it should be noted that the rule book for Battlelore is like 80 pages. That's a lot of rules. It's a stunningly beautiful book, and there are tons of illustrations, but every now and then you'll play wrong because you got the rule wrong. And then some rules lawyer will come along and start berating you for moving the wrong guy, and you'll have to hire Matlock to defend yourself (see what I did there? Still Andy Griffith, but completely different show).

While it's not entirely related to either Richard Borg, Battlelore or Andy Griffith, it's worth mentioning that the Days of Wonder guys have some of the best customer service you'll ever find. Like there was an issue right after Battlelore's release when some of the dice were fading - and they just sent everyone free dice. They love their fans at Days of Wonder, and their fans tend to love them.

And everybody loves Richard Borg.

Cons:
Lots of luck
All those miniatures make me feel inadequate because I haven't painted them

The only game I've played more than Battlelore in the last five years is Heroscape. I think you should buy it.
https://www.daysofwonder.com/en/buy/?family=BL
Posted by Matt Drake at 7:56 PM

I have hesitated on Battlelore for a few reasons. 1- Price. 2- It seems too similar to Heroscape to justify the price. 3- Richard Borg - word on the street is that he is really evil...

Put me in Coach, I have been eyeing this one for a long time, and have really wanted it, now after your review it is up to must have, will trade a kidney for it, I have 2 I think.

Great write up, I liked the Mattlock tie in, never watched it, but I love my any old ANdy Griffith.

I totally agree, its a great game...Can Richard Borg help Aunt Bee with her pickles? Thanks to mighty Hendel for turning me on to this site. Krullovax