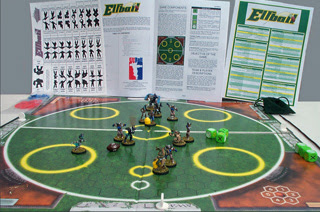 I think it is fitting that, as I write this review, millions of football fans are sitting down to watch the biggest sporting event our country can muster - the Super Bowl. It's fitting because I'm reviewing Elfball, a game that is a fantasy version of football mixed with rugby mixed with horrible beatings. As I play, I like to imagine that John Madden is calling the game.

Let's hear it for Joan Jetblack and the Dark Elves, ladies and gentlemen! Is there a man still alive in this audience? Yeah, I thought so! Today, your Desert Dogs do battle with the Pharoahs of Vihktora in the Elfball arena! Are you ready for some Elfball?!

Impact Miniatures makes hundreds of different pewter miniatures in more than a dozen teams to compete in a brutal fantasy sport game. The miniatures are incredibly detailed and, if you have the patience, a ton of fun to paint. Most of them would only make sense in a sports-type game - all of the Desert Dogs, for instance, have football helmets, and most have shoulder pads - but a lot of these minis could be used for just about any fantasy game. The Pharoahs, for instance, mostly are just really cool figures that could show up to harass any tomb-diving adventurer.

The game is played in a large, round, hex-grid arena. There are white lines and yellow circles all over, showing starting points for players and the ball, the boundaries of the field, and scoring zones. The goal is to carry the ball into your opponent's scoring circle and to keep your opponent from yours. To start off this event, both opponents select a team member and pit them against each other over the ball in a face-off challenge.

Well, folks, the Desert Dogs have chosen Abdul Hussein Muhammed for their face-off champ, and the Pharoahs are going with Anubis. The Desert Dogs' dervish looks like he can't wait to get a piece of that jackal-faced god clone - he's actually foaming at the mouth! But Anubis doesn't look worried - he's just sneering and sharpening his knives. The whistle blows and - oooh, that looks like it hurt. Anubis is down, and the dervish is dancing on his face! The mad Dog has completely forgotten about the ball!

Pretty much anything you want to do in Elfball requires you to roll a challenge. There are six dice that come with the game. One side of every die shows a big black X, which you don't want to see, and three sides show successes. One of those successes even lets you get to keep the success and roll that die again. It would seem difficult to fail a challenge, especially when you usually need just one success, but with the number of times you roll dice in this game, you're going to spend a lot of time cursing those black X marks.

The Desert Dog striker, Ahmed Guda Bin Guda, has raced forward to scoop up the ball. He reaches for it - but slips in wet grass, falls and smashes his face on the dervish's flying cleat! The ball shoots out from under him and rolls across the grass!

Bin Guda's tough. We've got a guy who spent most of last season recovering from a debilitating injury after a Valkyrie ice troll ripped out three of his ribs and ate them with steak sauce. The wizard-healers patched him up, but it looks like he might still be a little slow.

Once the game gets started, there's a lot of slow-down. Everything you might want to do - in some cases, even just running - involves a die roll. The rolls themselves are fast enough. There's no math, just counting, but when there are three or four rolls in a single turn, two irritating things can happen. First, the game can take a long time to resolve, and second, the odds of seeing those unlucky flops gets uncomfortably high.

Anubis rolls away from Muhammed and he's up, running for the ball! He grabs it, looks around, and chucks it to Ra, the thrower rookie from Cairo State. Muhammed makes a grab for it, but it slips through his hands and it sails clean to Ra. Here's Ra with the catch... no! He's dropped the ball! It bounced off his beak and is now rolling toward Bast, the Pharoahs' striker!

Possibly the most exciting part of Elfball is the tackling. You'll find yourself running around behind your opponents to hit them in the back, even if they don't have the ball, on the off chance that you can roll enough successes to put them in the infirmary. The midfielders in this game appear to be perfectly suited to either carry the ball or beat the holy hell out of the other team. The defenders are the toughest hitters, though they are a little slow.

Bast is having an incredible day! A huge run across the field, dodging tackles left and right while Thoth and Nehkbet cover for her, and she's within one short sprint of the Dogs' goal! She's just got to get past Faruk Faruk, the Desert Dogs' defender, but that could be a problem. They don't call him the Sand Devil for nothing! He leaps at Bast, hits her hard, and she's down! Folks, you could hear that hit from the stands! Faruk gets up, but Bast looks bad. Wait... yep, Faruk knocked out her spleen. Looks like she'll be sitting out the rest of the season!

A single goal in Elfball can take from 20 minutes to most of an hour, and a three-point game can go for two hours. If you're a casual gamer, this can get really old, really fast, but if you're really into miniatures games, or if you remember fondly the days of Blood Bowl, Elfball might be just what you want. This is no fancy-schmancy pre-painted miniatures game you can finish in 30 minutes. This is seriously old-school, from painting your team and carrying them in padded containers to careful maneuvering and tactical positioning. And let's not forget luck - as often as these dice roll, the best-laid plans can be completely undone by a streak of flopped die rolls.

Unbelievable, folks! This game looks like one for the history books! Butros Butros Ramadin, the Dogs' thrower, has scooped up the ball and made an incredible dash! His midfielders have done an amazing job protecting him, flattening the Pharoahs like a house of cards while Ramadin runs it right up the left side! It's just him and Sobek, the Pharoahs' defender, and the giant croc takes his shot!

OH MY GOD! Sobek has tripped over his own tail and fallen! Ramadin leaps over his scaly hide and slams the ball down in the goal zone! The game is over, the Desert Dogs are this year's world champs! Look at Ramadin's end-zone dance! He looks like he's about to whip out a machete and start carving up the Pharoahs! Wait, he is! He's chasing Thoth all over the field screaming something about infidels! What a game, folks! What a game!

In the final assessment, Elfball has potential, but it's not for everybody. The 40K crowd is much more likely to get a kick out of this than any kind of Euro gamer. There's huge amounts of violence, ridiculous luck, and lots of careful positioning and maneuvering. If you like miniatures games and sports games, Elfball could be your new favorite game. On the other hand, if you love games with quick turns and a minimum of luck, you probably want to avoid this one.

The guys at Impact! Miniatures love what they do, and it shows. They assemble every game themselves, so go here to get yourself a copy, and pick up a couple teams of pewter gridiron champions while you're there:
http://www.impactminiatures.com/index.php?option=home
Posted by Matt Drake at 2:00 PM

This sounds like and advanced Battleball, which I love. I hope I can see this one at GenCon and hopefully buy. I hate the idea of paiting lead figures, I wish they would have the option to buy pre-painted plastic ones ( one of the reasons I love Heroscape ).

Glad you got this one, I have been waiting for your review on this one!

I could hear Madden in my head - nice!

Thanks for the review Matt. We are just too small at this time to do pre-painted plastic (unfortunately). You need MANY thousands of dollars to do those for a game and we are a small company with a game idea we loved. We will have a booth at GenCon where you can demo the game.

Finally my only comment to add to Matt's review is that a recommended game of Elfball is only to one goal. Our goal for the game was to aim for a 45 to 60 minute game for players that know the rules already.

And if you find that the mid game seems slow to you we highly recommend trying the optional rule in the rulebook for being able to move 2 players each turn if your first one doesn't fail during his turn. This really speed up a game probably down around to 30 minutes for experienced play ... however it increases the effect of luck on the outcome of the game.

I'll add a note on pre-painted minis - I wouldn't like to see them in Elfball. Even if Impact! gets to be the size of Wizards of the Coast, these minis are too great to go pre-painted. Like I told Tom, even with my feeble painting ability, my Desert Dogs look a hundred times better than any cheap plastic pre-painted miniature, and my Pharoahs are so detailed that they're simply gorgeous with a full paint job. Pre-painted minis have their place, but they'll never replace the glory of a lovingly painted pewter figure.

The newest edition of Elfball 5.0 was updated based a lot on my discussions with Matt after his review. There are now introductory/tournament rules which should for the more casual gamer make for a much faster game with the luck factor toned down by a large margin. I'm looking forward to Matt's review of these rules changes for the new version.