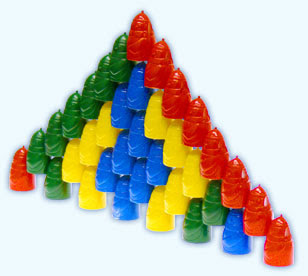 I'm overdue for a Reiner roast. It's time for me to take some cheap shots at my least favorite game designer, by abusing the hell out of one of his stinker-est games. So sit back and enjoy this review of Penguin, a game you should avoid at all costs.

Penguin is a typical Reiner Knizia game, typically overproduced by Fantasy Flight Games. The premise is simple - you've got four different colors of penguin, and you stack them, but a penguin can only stand on two penguins, and one of them has to be the same color. The penguins are all plastic, with these little stands on their shoulders, and so you pile them up and make this big stupid penguin pyramid. At the end of the round, you get penalty points for the penguins you're still holding.

This game had a tiny bit of potential - if it had been a card game. It still would have been boring, but it wouldn't have been as entirely frustrating. But in typical FFG fashion, what could have been a simple affair was turned into a plastic nightmare. Sure, it seems like a cute idea, and sure, it's easy to learn.

But those penguins won't stack.

You can push them, twist them, balance them and force them. You can whine, cajole, piss and moan, and those damned penguins won't stack. The picture at the top up there? I don't know how they did that. My family walked away from this game three times. I tried to bring them back, but everyone said, 'those penguins won't stack.'

So what you've got is a game where you stack penguins to win, only you can't actually get the damned things to stack. They just don't fit. Sure, maybe two or three levels, you can make them fit. But when the pyramid gets taller, the tolerance is shot, and then what should be a five-second turn ends up being five minutes of you taking the whole thing apart to find the one wonky penguin, cramming it all back together, then carefully (with both hands and some help) pushing another penguin on top. It's not fun. It's work. If you're going to play this game, you should be getting paid.

You can tell this is a Reiner game, too. There's no reason for this to have penguins at all. I mean, you could change out the theme with cheerleaders and it would make more sense. For that matter, you could change it out for homeless men climbing over each other for a discarded cigarette. It would have made the most sense as an abstract game with wooden blocks, but heaven forfend that FFG should make a game that makes sense, especially if Reiner is coming up with the theme. This is the guy that made undersea warfare into a boring math game. Theme has never been Reiner's strong suit.

In all fairness, Penguin could have been fairly cool if they had thought about it a little. Wood blocks would have been cool, and then if you don't like the game you can always make a model of the Alamo. Cards would have worked, too, and been a lot easier to handle. There's no reason for this horrible game to have penguins, and no reason for them to be poorly-stacking plastic exercises in frustration.

I don't actually have this game any more. In a particularly mean-spirited moment, I took it to a tournament as a prize table offering. I actually pity the poor bastard who took it home. Let's hope he has the sense not to try to play it.

Pros:
At its most basic, there was a concept that could have worked

Cons:
Plastic penguins won't stack
Basic premise turns into frustrating crap game
Theme that could be traded out for bodies in a mass grave

You should not buy Penguin. Here's a link to a place that is smart enough not to carry the game:
http://www.sparkleclean.com/
Posted by Matt Drake at 7:44 AM

You know what this game needs... more violence.

I think they took that picture with the penguins all laying down on the table, not stacked at all....

This could be a card game played with a regular deck of cards...