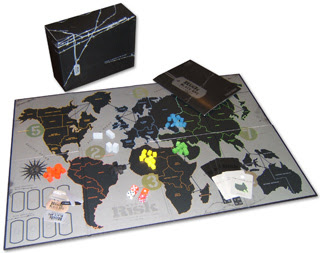 I concede without reservation that I am a small-time game reviewer. I'm not Tom Vasel or Erik Arneson. I'm not on the short list of people who get review copies from everybody who ever makes a game. I've never even been to Essen. But I still get some pretty kick-ass bragging rights, because I got a copy of Risk: Black Ops. Ha! Take that, Vasel! (Of course, I'm pretty sure Tom got one himself, and I hope he did, because he's a great guy and totally deserves it.)

Risk: Black Ops is the pre-release version of the new Risk game, which will be out in summer or fall of this year. It's a completed game, and it's gorgeous, and it's really hard to get a copy. I may be small-time, but I'm sure going to be crowing about scoring this game for a long time to come. I guess when you're just a two-bit amateur game reviewer, you take your successes where you can get 'em.

So there's this new, complete game created and released in minuscule numbers just to get people talking, and it's not even like a beta version. It's done. It's beautiful, and it's ready to play.

The rules are about what you remember from the version you used to play when you had free time and could spend all night watching that last guy try to blast the little pipsqueak holdout out of Australia. This isn't 2210, with commanders and moon colonies and robots. This is really a return to classic Risk, with little wood blocks for armies and even the triangular oblong pieces to represent three armies together. The nation cards are back, but instead of the three-of-a-kind symbol matching to get more soldiers, the cards have stars on them. Turn in cards with a bunch of cards at the top of the turn, and you'll be placing so many extra troops that your enemies will fall before you like old ladies at a monster truck rally.

The key difference between classic Risk and Risk: Black Ops is the inclusion of objectives. The goal of the game is no longer world domination - you don't have to eliminate everyone, you just have to nail down three goals. These goals are basically a quick way to tell who's going to win if you play until the bitter end. The goals are minor objectives like 'Control Europe' or 'Control North America', or major objectives like 'Control Two Complete Continents' or 'Control 18 Territories.' When you can accomplish any three objectives, you win.

Objectives also come with rewards, which can make it a lot easier to win. Bonus defense or attack dice, airfields that help defend strategic locations, or guaranteed cards at the end of every turn can really help you take over the world. Being able to make two free moves at the end of your turn can make sure you're not leaving key areas exposed, or can help you mass troops for next turn's sweeping invasion.

Some of you might be wondering how this compares to the big fat Risk variants like 2210, Lord of the Rings or Godstorm. There's really no comparison. Those reinvent the game and make it a whole new beast. Risk: Black Ops is Risk, but quicker. There aren't nuclear bombs or Atlantis or the One Ring. There are cities and capitols, but they really just make the game go faster by letting you mass troops in a bigger hurry. All those bells and whistles in the variant games completely reinvent Risk, and make it very different from the game you used to play with your old man, when he would get so mad at you for dropping the dice in the middle of Kamchatka and sending all of your brother's wood blocks flying all over Eastern Europe. Risk: Black Ops brings you back to that game, but it saves you the all-nighter. You won't need to inject Mountain Dew intravenously to finish a game in a single night, and that's basically the key difference.

The end result is really simple. If you like classic Risk, you'll like Black Ops. That's the long and short of it. Same great game, but you can finish in an hour. Sort of like light beer, but not disgusting.

Too bad you can't play it. But if you come to my house, I'll let you touch the box.

Pros:
Just like Risk, but faster
God bless America, is this game pretty
I have one and you don't

Cons:
What cons? It's Risk, but you can finish in an hour. How can there be cons?

You can't buy Risk: Black Ops, but here's what you can do while you wait for it to come out:
http://en.wikipedia.org/wiki/Drooling
Posted by Matt Drake at 10:45 AM

I didn't get to play though :(

While I haven't played Black Ops I have played the general release version of the "new" Risk.

I was thoroughly disappointed.

In old risk you can play with 2-6 people.

In new risk you can play with 3-5. This was the biggest disappointment, 2 less options for how many players. Yes, I tried houseruling up some 2 player, and it just fell flat.

The different denominations of pieces (big arrows and little arrows) are more difficult to tell apart, and don't have as much charm (subjective to be sure).

The rules folder looked neat, but was a royal pain to use with all the different parts of the book being their own loose page of cardboard.

Much more minorly, the cards were flimsier then over Risk editions and the art directions seemed a bit scatterbrained: It's supposed to invoke a WWII or Cold War vibe, but there are pikemen on the box?


Risk 2210 remains king of the mountain as far as risk versions go for me, with Star Wars: Original Trilogy in 2nd place.

Oh my god, there's a great deal of useful material in this post!