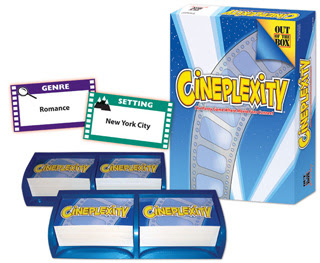 Quick, think of a movie that has Susan Sarandon, Sharon Stone or Sylvester Stallone, and that has a character who is Mexican or Mexican-American. Stumped? Yeah, me too, and that's why I don't really want to play Cineplexity again.

Cineplexity is a pretty straight-forward party game. One person draws two cards, each of which has different elements from movies, and then everyone else tries to be the first to come up with a movie that contains both of those things. Most of the time, it's not that hard to think of something. Like if one card says, 'A Guy Film' and the other says, 'Interracial Buddies,' you could run down a long list, at least half of which would contain Eddie Murphy or Jackie Chan. Incidentally, Eddie Murphy is also a good starting point for answers to 'An Actor Plays More Than One Character.'

But then you've got nearly impossible matches that occur now and then. For instance, one card might say, 'A Barrymore, Baldwin or Fonda' where the other one says, 'Rock Hudson, Dustin Hoffman or Woody Harrelson,' and then everyone just sits there and looks at each other (don't bother to post your obscure movie you found with a lengthy imdb search. I don't care).

Another problem with Cineplexity is that it requires a very specific group of gamers. You have to have a roomful of people who really know movies. Don't even bother to play with kids. If the answer isn't a Disney movie, they're out. It might be a little easier if the game allowed TV shows, but then, that opens it up too wide, and how does the adult in the room verify that Hannah Montana actually has a scene in a convent?

You can't even really play this with a bunch of people who are all equally matched in their lack of movie knowledge. When 'Noteworthy Kiss' gets matched with 'Vehicle with Unexpected Features', everyone is going to sit there and look at each other until they decide to put it away and just spend the rest of the night drinking beer and talking politics.

As concepts go, Cineplexity isn't that bad an idea. It's got hundreds of cards, so there are thousands of possible connections. And to be perfectly fair, I would probably love the game if I were a movie buff. But I use most of my Blockbuster rentals to get HBO shows or movies about war, so I'm going to get beat down by every film major on the planet, and I'm completely hosed if anyone in the room is a big fan of art-house movies. No way can I keep up with someone who likes French movies. Now, if the room is prepared to allow the inclusion of adult films, it might be interesting, but I would still lose because I never remember the titles.

There are lots of way better party games out there. Catch Phrase can get a roomful of drunk girls laughing like hyenas. Good Question is a lot more engaging, and can make you think a lot more. Even old standbys like Pictionary and Taboo have more potential hilarity than Cineplexity. Mad Scientist University, which I just reviewed earlier this week, is more interesting. Hell, Out of the Box makes better party games - Apples to Apples is great with the right crowd.

But then, like I said, Cineplexity has its place. Movie lovers could really get a kick out of this one. If you really know movies, you could have a blast searching your memory for a movie based on a true story that has a former SNL cast member.

Cons:
If you don't know movies, you will suck at this game

I didn't really like Cineplexity, because I'm not a movie buff. But if you are a movie fan, you can go here to get a copy:
http://www.otb-games.com/cineplexity/index.html
Posted by Matt Drake at 7:44 AM