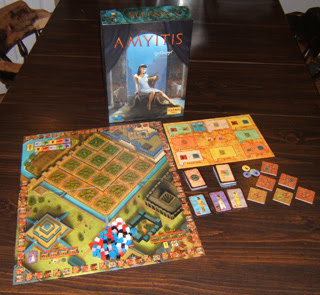 Have you been suffering from a shortness of cash? Are you tired of trying to impress a woman, and just coming up short? Are you leaving the woman of your dreams unsatisfied?

If you answered 'yes' to all these questions, you may be suffering from a condition known as Amyitis, a rare condition that strikes Babylonian kings who take brides from far away lands and then find out they actually liked it better where they came from. Symptoms include a disappointed bride, a court full of sycophants sucking up at every turn, and a constant need to look better than everyone else.

But there is good news. There is treatment for Amyitis. Recent clinical trials have indicated that Gardenz will satiate that foreign goddess, and even increase your own prowess in the eyes of the ruling queen.

Should you wish to see just how Gardenz works, Rio Grande Games (not a subsidiary of any major drug company) has released a trial version aptly titled 'Amyitis.' This recreation of the treatment of Amyitis will allow you to see for yourself how building gardens in the palace will allow you to improve your own standing with the foreign queen.

In Amyitis, each tester will assume the role of a sycophant plagued with the desire to win favor in the eyes of the new Babylonian queen, a condition commonly known as Amyitis. The best treatment for Amyitis is to build gardens in the palace, though improving your own palace will also improve the queen's opinion of you and help in the treatment of Amyitis.

You will travel around the lands of ancient Mesopotamia in order to purchase the plants you need to create Gardenz. You will perform engineering miracles to irrigate the tiered palace, and you will recruit priests, peasants, engineers and merchants to aid you in your travails.

You will, of course, need money to recruit these helpful people, and you must recruit them, for after all, as a court sycophant, you know nothing of worship, farming, irrigation or driving camels, just sucking up and wearing too much makeup. Your first recruitments may be had for free, but further recruiting will cost money, and only by actively pursuing your financial interests rather than taking actions to further your goals will you be able to earn the money you need. You must choose wisely - fail to recruit help, and you will be unable to raise the resources you need to create Gardenz. But too much action has a price as well, because only through inaction can you raise the money you need to recruit, and you could find yourself unable to deal with your Amyitis if you plan poorly.

Once the peasants have gathered resources for you, the priests have made your sacrifices to the temple, the engineers have irrigated the waterways of the Babylonian palace, and the merchants have secured you camels for your caravan, you will be free to travel to the various cities of Mesopotamia. Some cities carry plants, it is true, but others will provide you with better caravan drivers, bankers to earn you money while you act, or palace improvements that help to alleviate your bad case of Amyitis by earning you prestige. But you must decide carefully when to move the caravan, for if the caravan passes a city, you may not return there until the caravan has passed all the way around and returned. And should you progress too far with the caravan, another court noble may be in position to move to the city he wants, and further his own needs at the cost of yours.

In the end, of course, the best treatment for Amyitis is Gardenz. By planting ever more impressive plants in the palace of Nebuchadnezzar, you will impress the queen and earn more prestige. As the test comes to a close, the tester who has most impressed the beautiful but capricious queen will find that his case of Amyitis is the best alleviated.

Amyitis will not have the same symptoms for everyone. Amyitis can be difficult to understand, at first, especially if you are suffering from a lack of talent when it comes to resource management. Amyitis can be difficult for young children, and nearly unbearable if not shared with an adult. Amyitis may remind you very much of Euro games, and if you are an ardent fan of games with big explosions and ugly sword fights, you may find that you need to avoid Amyitis.

However, many people who experience Amyitis will find that they thoroughly enjoy it. Amyitis will force you to make difficult decisions, any of which could save you or ruin you. Amyitis has no dice, and very little luck, and for those who like a tense game of managing resources, tense decision making and careful interplay of other players, Amyitis could be quite enjoyable. While it may not have the simple appeal of many Euro games, Amyitis could be slightly addictive for those who like a game with a great deal of depth.

Pros:
Incredibly deep decision-making
Your ability to plan ahead will make or ruin you
Your ability to adapt will be just as important
Minimal luck - but your fellow players can still screw you pretty well
Interesting theme

Cons:
No tactical play may disappoint Ameritrash devotees
Name of the game sounds like a social disease

If you believe you may have a case of Amyitis and would like to see if Gardenz is right for you, you can get the game here:
http://www.funagain.com/control/product/~product_id=017802
Posted by Matt Drake at 6:22 PM

Will I need Enzyte to keep up my interest in this game? Or will I need Zoloft to deal with the feelings of self-loathing I'll have afterwards? Or should I just buy a Ticket to Ride off to some other game instead?

These and other questions will be answered on the next episode of Soap!