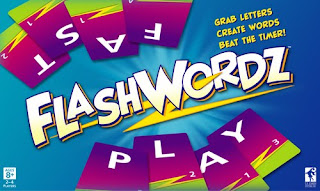 Tonight I will review a game called Flashwordz. It is a spelling game. If you were sitting near me as I type this, you would hear me saying, 'Wow, a spelling game with a misspelled title. That does not seem like a good idea.' Of course, that's assuming I talk to myself while I type, which I generally do not do unless I am very angry about something. And frankly, a 'z' at the end of a word where there should be an 's' is mildly irritating at best. So I guess you would not hear me after all.

The game itself is cute. Each player has a curved tray where they stick cards with letters on them. Then you take turns going around the table and spelling words using three of your letters and one of someone else's. If you can't spell a word, it's a free-for-all, and the first person to holler a word gets to spell it. You keep the cards you used to spell your word, and then when all the cards are used up, you count and see who has the most points. It plays pretty fast, which is probably why they called it Flashwrrdzz.

FLSHwrdz is published by the U.S. Game Systems company, which sadly does not make anything else that is awesome, unless you need forty-seven decks of tarot cards. I do not. Their lack of actual game publishing experience can be seen in the quality of the art, which all appears to have been created by a high-school kid who just learned how to use Illustrator. The graphics get the job done, and they definitely do not get in the way of playing the game, but they are not particularly enticing. Which is fine, because this is a game about spelling words, and thus does not need to be particularly pretty.

And whether or not Fl4shwdzz looks like a million bucks, it is entertaining. We all enjoyed it. It's long on flaws and short on strategy, but it is a fun exercise in looking for words and spelling them really fast. It's not particularly challenging, but it still makes for a tense and exciting game that will break down in giggles when someone spells 'fart'. I suspect that the ideal age bracket for this game is about ten years old, but I played with a bunch of grownups, and we all had fun. I do have to admit that some of the four-letter words we spelled were not exactly kid-friendly.

It's actually a little tough to discuss Fl45hW0rrzzz in any depth, because there's really not much depth to discuss. I would like to make this a very long review where I discuss all the brilliant subtlety and tactical genius of the game, but since all you do is spell words you see on playing cards, that's not going to happen. But if you have a kid who really likes words, or if you're just trying to trick your children into using their brains for something besides Call of Duty, Flashwordz is a good pick. Never mind that they deliberately misspelled the name of a game about spelling.

Pros:
Fast-paced and tense
Fun and light
Semi-educational without being patronizing

Cons:
Not really all that attractive

I was going to link you to Noble Knight Games so you could buy this game, but it's not there. Then I was going to link you to the publisher, but they also don't have the game. So I don't have the foggiest notion where you could get Flashwordz. Maybe the publisher should have set up their website to accept preorders before they sent out review copies.

Pretty worthwhile piece of writing, much thanks for the post.