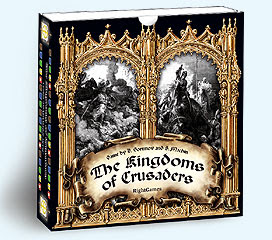 Russian Game Week started off with a bang. Maybe a flop. Maybe the sound a dead fish makes when it slaps onto a cutting board. But the second review - now here's a good game. The Kingdoms of Crusaders is surprisingly good.

I was not looking forward to playing Kingdoms of Crusaders when I got the box. After I read the rules, it looked even worse. It's painfully basic - you've got a hand of five cards, you draw one, and you lay one down. That's it. You don't even have a whole pile of options. You just play a card to one of five 'kingdoms', and your turn is over. It looks like a boring Reiner game - oversimplified, dry and themeless.

A quick comment on the art for The Kingdoms of Crusaders is in order here. There's no reason these cards need art below the top half-inch, so the rest of the cards are filled with art cribbed off Clipart.com, mostly woodcut prints that are supposedly inspired by the crusades. Unfortunately, the drawings are really difficult to make out, so they end up looking like octopus farts. One of the reasons I was hesitant to play the game is because it just looks cluttered and messy, like a PDF book assembled by a high-schooler whose entire budget is the money he makes mowing lawns on the weekend.

Plus the theme is completely pointless. This could have been an abstract, so it's at least something like a Reiner game. According to the garbled translation that serves as the rulebook, you're trying to build armies in five different areas, because it's the crusades and that's what they did. But really, you could replace the theme with colored dots and have the same exact game. That's got Reiner Knizia written all over it.

But when you actually play The Kingdoms of Crusaders, you'll want to write Doctor K and tell him to hang up his lab coat, because the Russians have him beat. The rules for this game are ridiculously simple, and yet there's a staggering amount of tactical and strategic brilliance. Each card has colored symbols on it. There are brown, blue, green, yellow and red, one of each color, only the cards usually only have one or two of those. To win an area, you have to build sets of matching colors, which can be tricky if you're not holding cards with matching colors.

Once you get a couple turns into the game, what looks like a child's game about spotting colors turns into a mind game to rival Sherlock Holmes versus Moriarty. You can only play one card at a time, so you can't sweep in and grab an area with everything you've got. You have to bluff by playing a couple weak cards in one spot, then while your opponent is distracted with the easy kill, sweep in and grab up the areas where he thinks he's winning. Choose a losing area as a dumping ground, and put off showing your power until it's too late for your foe to do anything about it.

One thing that is not obvious from the rules (aside from what the hell they're supposed to actually be saying, because the translation seems to have been performed using Babelfish and a deck of tarot cards) is how crucial it is to hide your intent. It's not hard to beat your enemy in a given area, as long as you know what he's already got there. Commit early, and you either tell him where he's safe, or you telegraph your hits so he knows to save his good cards for another location. You'll be feinting and counterattacking and gambling on the draw. It's enough to make your head swim and your heart beat faster.

If you buy two copies of The Kingdoms of Crusaders, you can even play the game with four people. I assume it would be a different game that way, but I don't really know, because I only got the two-player version. It says that right on the box - "This game set means two players." I assume that means the base game accommodates just two, because it's absurd to believe that "Kingdoms of Crusaders" is Russian for "two people playing a game." My Russian is spotty, but I'm pretty sure that would be wrong. At any rate, if I can convince my new friends across the Atlantic to send me another copy of the game, I'll let you know how the four-player version works.

So ignore the eyesore art. Ignore the theme that was applied with a glue stick and a roll of scotch tape. If you want an abstract game that will make your brain smoke and your adrenaline kick into overdrive, The Kingdoms of Crusaders should be the next game you buy. It's incredibly smart and ridiculously fun. It might just be your next two-player addiction.

Pros:
Absolutely brilliant
Far more depth than appears on the surface
Compellingly and quite possibly addictive

The only place I can find to buy The Kingdoms of Crusaders is on eBay. The price is right, though, and you'll get your money's worth out of this ugly little gem:
WICKED COOL GAME

How does it compare to Battle Line? Or, speaking of Knizia, Scarab Lords?

I never played Battle Line. Scarab Lords is fun, but nowhere near as intense. This is balls-to-the-wall and the hits just keep on coming.

And except basic version there is an expansion pack which contains cards with two lines of symbols (so, in theory, you can collect 8 symbols of same type in one area) and kind of "spell" cards, that allow you to move your card from one area to another, shorten the limit of cards in area from 4 to 3 (or extend in to 5), destroy opponent's card or cancel any color in one area. You can imagine the reaction of your opponent when he collecting red "banners" in one area and then "banners" become canceled there) Expansion totally changes the game, so I recommend you to get it)

I would love to get the expansion, but sadly, it's not in English yet. There are expansions for Evolution and Potion-Making, and I want those, too. But I'll have to be patient.

I too received the four games from RightGames and my wife and I played two games of Crusaders this evening. It brings to mind Lost Cities, Battle Line, Scarab Lords and Babel, as two players play on opposite sides of a central board and vie for control of the individual columns. The game is light fun and plays quickly, so quickly in fact that a series of games should be played to determine the ultimate winner. Perhaps you can visit South Arlington Gamers this Thursday at Super Target on Arbrook, bring your copy and with mine we can see what a 3 or 4 player game is like. The victory markers are pointless without playing multiplayer, as the 3rd best "army" scores but a single point while best scores 3 and 2nd best two points. I have no problem with the artwork, btw.

Also, I would think that 3 or 4 player games might feature a variant: to wit, the rotation of the start player, clockwise, as is standard practice in many games.

Awesome review as always, thanks for sharing. It is great to Know there re cool games coming out of Russia, very cool!