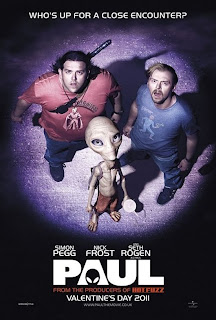 Movies that reference other movies are not exactly rare. We watched Rango, which is cover-to-cover full of references to other movies, and then we watched Paul the next night, which references nearly every big science-fiction movie or TV show made in the last ten years. But there's a big difference between obvious, unoriginal references that damage the continuity of the film, and well-placed references that make everyone chortle with glee because they recognized them. Paul has that second one.

Paul sells itself as a sci-fi romp, but it's really more of an homage to everything sci-fi geeks hold dear. It starts out at ComicCon, and rolls through references to Star Wars, Star Trek, Battlestar Galactica, Aliens and Close Encounters, to hit some of the more obvious highlights. It's full of lines that will have sci-fi nerds giggling uncontrollably and laughing right out loud. I know, because I was giggling uncontrollably and laughing right out loud.

The great thing about Paul is that it works on lots of levels. If you're just looking for a distracting goof with an alien and some vulgar humor, Paul delivers. If you want to feel like part of the in-crowd that knows pop culture the jocks won't get, it's in there. And if you want to see some well-developed characters and an engaging tale, Paul will keep you delightfully entertained.

The title of the film refers to the big-headed alien who gets himself rescued by a couple hapless comic book geeks in an RV. The alien has been on the planet for decades, and has a twisted sense of humor and a love for the finer things in life (by which I mean alcohol and hallucinogens). The choice of Seth Rogen to voice the foul-mouthed space traveler is perfect - when he makes dick jokes or weaves a string of profanities that would blister the paint, he just feels right. I can't imagine any other actor who could delivered his off-color lines as well. Can you imagine Clint Eastwood saying, 'What, am I harvesting farts?'

The two comic nerds are played by Simon Pegg and Nick Frost, the knucklehead geniuses who brought us Shawn of the Dead and Hot Fuzz, and they're just as incredibly fun to watch as they have ever been. Whether they're being routinely mistaken for a gay couple, acting out Star Trek scenes in rubber masks, or running for their lives from redneck bruisers or psychotic Bible-thumpers, Pegg and Frost are hilarious and just plain fun to watch.

Paul is more than just a good story. It's freaking hilarious. But it's my kind of humor, which is to say, it teeters on the edge of being offensive. Then it takes a running start and leaps wildly over the edge, right into awesome. Not like constant penis joke gross, or anything. It's not Your Majesty (which blows goats), just lots of cussing and jokes about probing. This isn't disturbing or anything, just damned funny and peppered with F-bombs.

If you're a particularly religious sort, you may want to give Paul a little thought before you go get the DVD. The movie mercilessly guts the more extreme religious wackadoos, and while I found those parts hilarious (due largely to the fact that I find the Young Earth concepts utterly laughable), if you are sensitive to people poking fun at scientifically ludicrous theories of Christianity, you might find Paul a little uncomfortable. Especially if you watch it with your pastor.

However, I did particularly like the part of the film that expresses amusement at the idea that the planet is only 4,000 years old and yet maintains that disbelieving that particularly silly idea does not preclude the possibility of religious belief. It was like the writers were saying, 'yes, some parts of some religions are stupid, but let's not throw out the baby with the cavemen who rode dinosaurs to their jobs at the quarry.'

Simon Pegg and Nick Frost have made themselves international icons for nerds the world over, and they do a lot more than just deliver boob jokes. Their stories tend to be tightly scripted, magnificently well-timed, and downright amusing. The knuckleheads who brought us Shaun of the Dead and Hot Fuzz continue to deliver seriously entertaining goofery that leaves you with the certain knowledge that these are two guys who you would love to know better. But even better, these guys make you reasonably sure that they would actually enjoy knowing you. Paul is a great example of this - when you finish watching the movie, you'll want to call them up and see if they can make it for next week's barbecue.

They can't, of course. They're going to be at a local convention for people who collect Star Wars memorabilia.

Pros:
Absolutely hilarious
Some great 'in-crowd' references that will have sci-fi nerds laughing like idiots
Great writing and solid plot with some very likable characters
Nerds in the spotlight - gets me almost every time

Cons:
The humor is not what you might call clean, though it is really funny
Some rather vicious pokes at religious extremists
(Neither of these things bothered me at all, and in fact, were Pros for me)

I may need to see this film some time! I recall the trailer had a trivial bit of birding humor. The bird Paul resuscitates and then promptly devours is the European Starling. There were 100 of the birds released in America around 1890 by Shakespeare enthusiasts (they wanted to introduce to the U.S. all the birds mentioned in Shakespeare's literary works). Since then the breed has competitively implemented itself and flourished by the millions in America. Eat as many as you can, Paul!

I don't want to get into an argument with you, but I just wanted to let you know that young earth advocates find the concept of earth being billions of years old laughable.

Also, many Christians do not feel uncomfortable or offended when a fictional movie makes fun of our faith.