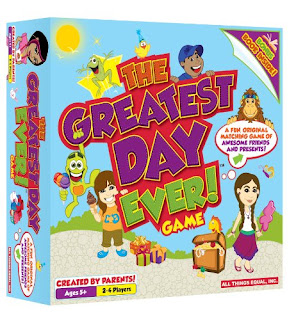 Kids are not stupid. OK, that's not exactly right. Kids are stupid. But a kid's stupidity is generally related to things like riding his bike off the roof or lighting the curtains on fire, as opposed to not having the mental capacity to recognize when a game is blatantly lame.

Unfortunately, the people who made The Greatest Day Ever think your children are mostly brain-dead. They believe that your kids will be amused by a game that offers no interesting decisions and elects a winner based entirely on luck. This bland eyesore gives you four friends and four presents and five cards, then lets you roll dice to move in circles and see if you can land on the spaces that let you swap out your cards. If you can match your five cards to the friends and presents you've been assigned, you win! And then you can steal the gigantic die to use in a different game before you box it up and decide whether it's recyclable, or if you just have to use it to fill a dumpster.

The theme is likewise thoroughly ridiculous. The idea is that you're all enjoying a day out, meeting people and extorting them into giving you things like bicycles and lollipop monsters (in case you're wondering, a lollipop monster is a green, booger-shaped creature that offers you candy if you'll get in his car). I don't understand how that makes it the greatest day ever, because when I was young enough to be close to the target market for this game, my greatest day ever involved being a space explorer who solved mysteries and put out fires with my magical powers. It was not walking in circles while I talked to strangers.

The Greatest Day Ever has a mighty impressive claim on the side of the box. It states unequivocally that the game was designed by parents. That might seem like it would be a great idea, until you consider that you could say the same thing about any game designed by someone with children. How much do you want to bet me that someone at the design team at Rockstar Games has kids? Because if at least two of them do, then we could also point out that Grand Theft Auto was designed by parents. I don't really know, because I don't pay any attention to whether game designers have children. It's one of those things that is none of my business (at least, that's what the cops told me when they caught me outside Reiner's house with binoculars and a video camera).

I do enjoy a good game made for kids. Just last week I reviewed Connect 4 Launchers, and I loved it. Sorry Sliders is one of my favorites. I don't have any patience for Chutes & Ladders or Battleship, but I hated those games when I was eight years old. Because I wasn't stupid. Well, OK, I did get stuck in a sewer drain with a towel pinned to my back and underwear on my head, but I was able to determine that a game's outcome should have some relation to decisions I make during the game. When the only winning factor is whether you get lucky enough to beat everyone else to having the right collection of five cards, even a person prone to eating mud can see that there's not much reason to play.

I wish I could say the art was at least likable, but sadly, even there, the parents who designed this game failed completely. Kids may not be capable of determining for themselves whether they should hide candy in their sock drawers until ants overrun their homes, but they're still smart enough to recognize cool art when they see it. Transforming giant robots - cool. Superheroes in futuristic cars - cool. Dorky line art depicting overweight pizza chefs - not even remotely cool.

At this point, The Greatest Day Ever is simply a bad game made by people who should know better. If I gave games numbers in a vain attempt to quantify how much fun I have playing them, this would score very low. Like, I would need a decimal point at the beginning of the number. But the parental units who created The Greatest Day Ever wanted to drive the score into negative numbers, so one of the presents that you can get from the dubiously motivated strangers is a copy of a party game by the same publisher. I'm sure Ozzie and Harriet thought it was very educational to try to sell youngsters more of their games.

Your kids might be drooling potato-heads who can't count past ten without taking off their shoes. They might have all the common sense of a ferret with a learning disorder. But they're still not going to enjoy The Greatest Day Ever, because when it comes right down to it, the game isn't fun for anyone at the table. It's pure luck, with dorky art and a random theme. If you play this with your child, you are virtually guaranteed not to have a great day at all.

Pros:
The humongous die that comes in the box works great for tracking the hit points of evil robots

Cons:
Weak art
All luck with no decisions that have any real affect
Ridiculous theme
Patronizing to any kid not in a coma

Even these kids know that this is not a fun game. And they're stupid.
DUMB KIDS
Posted by Matt Drake at 2:46 PM

I found a lot of effective data above!