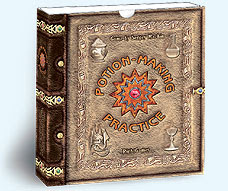 Russian Game Week is coming to a close, and I saved the best of the batch for last. I need a big drum roll and maybe a man dressed up as a dancing bear. This last game requires some fanfare, because it's one of the most entertaining games I've played this year. If I was a lot less lazy and bothered to rank things, this last game could be a contender for Game of the Year. But I don't, so it's just really fun.

The name might be a little bland, but the art in this game is beautiful. The card design is lavish and ornate, with more eye candy than an NFL trophy wife. Whether it's a painting of mandrake root or an elaborate design that twists around everything like an insidious magical vine, the graphics for Potion-Making Practice will make you want to play, even if the name sounds like homework.

The premise seems simple enough. You're all combining elements to make potions, and then combining those potions to make elixirs, and then combining the elixirs to make talismans and mythical creatures and taco salads. The more complicated your concoction, the more points you get for making it. You can even use the compounds your opponents cook up, but when you do, they get points for having you steal their stuff.

An interesting element of Potion-Making Practice is that on your turn, you only ever get to play one card (unless it's a spell card that says, 'play another card'). This means you can't make potions with the elements in your hand. The only way to get the base elements is to pick them up off the table, and the only way those elements get there is if people put them there. Since you score a point just for contributing a new element, there's considerable incentive to fill the table with building materials, even if you don't have any way to use them.

It might seem like this is a game where you want to block your opponents by trying to figure out what they want to cook and depriving them of their recipe ingredients. But since the winning combinations come from combining existing potions, and you can use the finished potions your opponents mix up, it's actually in your best interest to let people make whatever they want. Making simple potions is not going to win you the game. For the really big scores, you need to whip up the impressive potions, the magical critters, or the tricky talismans. And to do that, you'll need to take advantage of the concoctions created by the other Hogwarts kids.

At first glance, Potion-Making Practice looks like it's all luck. If you never have the cards you need to build the potions you've drawn, you could just be screwed. But the player counting on luck is going to lose to the player who watches the card play, keeps track of his hand, and uses what he has when he needs it. Patience is the key - it doesn't matter if you make a potion every other turn, because in the end, the player who puts together the killer combinations will win the game, and he can only do that if he manages his cards very carefully.

Some of us were of the opinion that there were too many elements, and to be completely honest, that can be a consideration. The game can be frustrating if the two pieces you need to finish your creation never appear in the middle of the table. But then, you're not going to win the game with simple creations, so the elements on the table are not as important as they seem. It's frequently a good idea to put down the pieces your opponents need, so that after they compose your missing ingredients, you can whip up the extravagant creations you've been holding since the second turn of the game.

Potion-Making Practice isn't an easy game. There is a seriously intimidating number of things to track at once, and winning this game requires timing and patience and cunning. It's not a light game, either, and will demand your attention and intellect. But it is a tremendously fun game, the kind of game that you'll be discussing for hours and dreaming of playing for days after you finish. I'm writing this review right now and mentally salivating over the possibility of playing again tonight. For some people, Potion-Making Practice is going to be work. For people like me, it's a wonderfully complicated puzzle that demands every bit of genius I can bring to the table. Games as good as Potion-Making Practice just don't come along very often.

Pros:
Smart and tricky
Requires intricate planning, careful patience, and whip-smart timing
Beautiful art
After you play, you'll have a hard time thinking about anything else

Potion-Making Practice isn't just the best Russian game I've played. It's one of the best games I've played in a long time. You can get it on eBay, right here:
KICK-ASS RUSSIAN AWESOME

I do agree with you. Moreover - it's highly addictive. I played with my wife enormous number of times. Final count by games was something about 150:120 in my favor :)

sounds like something at Hogwart's (or the Eastern European equivalent)

I have had the russian edition for a couple years now. I agree, it is one of the best games in my collection. There is a reason why this is the hottest game in russia for quite sometime.

I find it odd that they renamed this for the english version as 'Potion Making Practice' when the original title of the game 'Зельеварение' (Zelyevarenye), simply translates as 'Potions'. The translated name is much better in so many ways than the english version name. It boggles the mind why they bothered and actually detracts from the game pretty significantly in my opinion for such a simple thing. The card backs look like a hickory smoked horse butthole because of it. Rather unfortunate for an otherwise stellar game design.

OK I am officially stealing "hickory smoked horse butthole" for my next BGG post!

Initial play was very interesting and I look forward to playing again soon. My wife and I worked out some rules issues (can't make more than one formula per turn) and missed initially that cards in hand cannot be used for ingredients, only formulas. Drawing back to five when a spell card is used was also a kink early on. As is the case with the translations of these fine Russian games, they leave a lot to be desired at times.

Excellent review, but the bj reference made me wince.

This is the game about Hogwart's indeed. But it is not oficially proclaimed because of the copywrite things.

For example, "Avocado Kedavra" card was renamed because of this.

Also, you should totally try the game with the first expansion, "Университетский курс" (University course). It allows for much more movement, since you'll have one MORE action per turn and will have big variance of spells.