Board Game Review - Conquest of Nerath 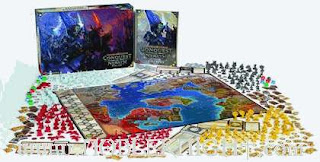 I don't know if growing older has jaded me or just made me realize how stupid Dungeons & Dragons really is. Probably both. But either way, I have trouble signing off on a fantasy setting with such a willfully improbable collection of bizarre beings, especially when the ramifications of most of the elements in Dungeons & Dragons are never adequately explored. By way of example, look at your average dungeon. There are hundreds of humanoid bad guys living in a cramped underground space, and somehow, no toilets.

But one of the great things about playing games is that you don't need a plausible setting to have fun. In fact, I would wager that the reason so many people love D&D is because it has so little in common with anything that makes any kind of sense. You might be a tubby loser with no social skills, but play D&D, and suddenly you're a ruggedly handsome scalawag who crashes society parties and makes babies with sexy half-dragon girls.

Conquest of Nerath is a great example of how you can start with a silly setting and create a fun game. Everybody will have a fantasy race, like elves or orcs or dead people, and they'll build armies and try to wipe each other out.

(Quick aside - you can tell this is D&D because 'dead' is actually an ethnic group. Equal Opportunity Employers in D&D have considerably more complicated HR paperwork. The list you have to check to determine if they have their government-mandated diversity goes like this:

Check all that apply.)

In Conquest of Nerath, everybody will have different armies, but they'll be made up of essentially the same bunch of dudes. You'll have infantry, which might be footsoldiers or speargoblins or skeletal minions. You'll have heroes and wizards, who can investigate dungeons and score treasures. You'll have monsters like hill giants and tree people to ravage enemy lands. And you'll have dragons, who will fly all over and piss fire on their enemies.

The thing that really makes Conquest of Nerath an interesting departure from other large-scale conquest games is the way you win. To claim first prize, you have to hit a certain number of victory points, which you score by finding treasure and stealing land from your opponents. The reason this is really interesting is because you don't lose victory points even when you lose the land you've stolen, and so more than just about any other big battle game I've played, you absolutely have to be aggressive. In fact, if you take another guy's land and then he takes it back, you can earn victory points by grabbing it a second time. Defense is almost meaningless, because if you hole up, you're just giving your enemies time to raid dungeons and pick away at your kingdoms.

Many of the other elements of Conquest of Nerath are common in this kind of game. Different unit types fight better or worse than others. Buying new soldiers is dependent on income. Castles can be built to reinforce strategic areas, and you can steal them from your opponents. In many respects, Nerath doesn't offer many new strategic options, but the differences are what makes the game fun.

For instance, you're probably used to games that reward the player who is willing to advance with caution. Try that in Conquest of Nerath, though, and you'll wind up watching your nation get eaten like a bundt cake at an office party. Defensive planning can keep you from losing too much to your foes, but it is far more important to go for blood and conquest than it is to reinforce your castles and hide behind the walls.

Also important to the game is using your assets where they'll do the most good. Infantry is mostly just useful for dying, while your monsters are best used to rampage through empty land, laying waste to entire towns and eating all the cheese. Boats can fight at sea, but they are most effective as public transportation to carry your people to work so they don't get stuck on the 405. If you really want to rumble in the ocean, bring out a storm elemental. They just fly around tipping stuff over, like a tabby on a catnip bender.

One interesting element of Conquest of Nerath is that you can play it in teams. In fact, since you have to set up every faction at the beginning of the game, if you have less than four players, you have to play teams. It's an interesting twist, but at the same time, it means the game isn't very flexible, and is probably going to be virtually the same thing every time you play.

Conquest of Nerath might not reinvent world conquest games, but what it does, it does well. Battles are brutal, but easy enough to play. Movement is smooth and not overly complicated. We were lucky to play at an office with a photocopier, though, because every player will want a copy of the back of the rulebook, so that they know how much more expensive it is to buy a siege engine than a grunt.

If you only play world conquest games once or twice a year, you don't need Conquest of Nerath. This is a game for people who really like big war games with lots of plastic warriors. There are dozens of games in this vein that are better, so the reason you'll play this one is because it's something new. Of course, you might also be playing because you want to fight giant purple tapeworms and find the beach sandal of abdominal discomfort, but that just means you're playing D&D.

Pros:
Buckets of cool plastic
An interesting twist that favors aggression and punishes the overly cautious
Plays easily, and everyone will be up to speed within two or three turns

Cons:
A few new interesting concepts, but otherwise, it's a lot of what you've seen before
Same setup every time you play means lower replay value

This is an expensive game, but if you like to play a lot of epic-scale blood bath games, it's worth owning. You can save a pretty darn impressive amount of money if you buy it from Noble Knight Games:
WHOLE LOTTA D&D

Great review. What are some other games like this that you would recommend? I am interested in getting this game but you make it sound like there are some better options.

Here's a short list of Dudes On A Map games that I think are worth playing:

That's a brief go-over. There are tons of this kind of game. I like any of those better than I liked Conquest of Nerath, but I still really like playing it.