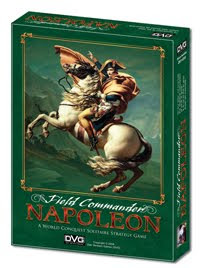 I have the coolest dad ever. Not just because he plays tons of games with me and took me backpacking a lot when I was a kid, and not just because he survived Vietnam and has kick-ass scars all over his body. No, my dad is the coolest because he willingly volunteers to play games I don't want to play, then takes the time to write reviews about them, thereby saving me time and effort and freeing me up for a night whenever I get to post his writing instead of having to do the work myself. So here's a review from my old man, who deserves endless accolades for playing this game so I didn't have to.

Field Commander Napoleon or Napoleon, With One Hand Behind His Back

The components to Field Commander Napoleon are most definitely exceptional. The counters are thick and laminated, and on top of that they’re beautiful. They’re not overly-cluttered with information, and the most important features are clear and well-placed. The game maps, of which there are several, are perfectly functional for game play. Each map provides for one or more scenarios, so this box allows for a lot of repeated game play. The game boards are a bit austere since they’re just brown illustrations of the game area, but like I just noted, they’re more than fine for game play. Still, they’re of top-notch quality, if not sporting poster-on-your-wall aesthetics. The Battlefield card is very simple – an aerial-like photo of a typical European countryside. The artwork on the battlefield board is attractive with simple aesthetics, but the picture has no bearing on play.

FCN requires these two maps for each game – one fold-out map of the region the campaign occurred in, and a battlefield map on which you fight out the individual battles. The French general directing the battle (you) draws Battle Plans from a healthy assortment, but you’re allowed to choose only two or three (four in a couple of scenarios), and the rest have to be “default” battle plans. But don’t get into a funk over your lack of brilliance in command, because the enemy general is given a kidney punch in his selection of battle plans – you get to draw them from a cup and he’s stuck with what YOU give him (well, it IS a solitaire game, so the enemy general is at your mercy). These battle plans are the heart of the battle portion of the game, and I unhesitatingly agree that they’re a brilliant innovation in design for a solitaire game.

The rulebook is nicely done. Nice illustrations of components and good examples of play. There are several typos that irked me, but these generally didn’t throw off the meaning of the rules. There are places in the rules that I found pretty confusing. For example, when reading about “Shock” on page 12, I had to read it a couple times to figure out if I was rolling against the attacker’s or defender’s combat value.

That said, this is NOT an easy game to master. The rules are only 21 pages, but don’t let that put you into a false sense of complacency. If you’re not familiar with this type of solitaire game, you’ll probably have to read the rules through a couple times, and follow the example of play provided at the end of the rules. On the other hand, if you have vast experience with solitaire games, I suspect this game won’t tax you too badly. Me? Well, I’m not a solitaire gamer. Believe me, folks, I’ve tried. When “Ambush” first came out I snapped it up and rushed right into the scenarios. But the programmed nature of solitaire games just doesn’t do it for me. (In Ambush, one German pops up and fires at your guys, you kill him, move, and then another German shows himself. What kind of an ambush is that?!? “OK, Hans, it’s your turn to die, stand up now.” “Oops, lost Hans pretty quickly. YOU, Helmut, you’re next. Take a shot and die like a man.” The game is obviously very popular, but it’s not anything like a simulation.) FCN, in my own game play, stands in the same company as the rest of the solitaire genre.

Let me say more about this aspect of FCN as a solitaire game. I played the first scenario – Napoleon in Italy, 1796. I marched Napoleon and five of the especially beautiful unit counters into Savona to engage the Piedmont army there. I rolled on the Fog of War table and it said my battle was going to be two turns long. I set up the pieces and quickly discovered that after two turns I’d not even started to lock horns with the enemy. Did I read the rules wrong?? After re-reading the pertinent pages I set up the battle again and pretended I had more scouts than I actually had (as in none) and forced a battle of five turns. That seemed sufficient to annihilate the Piedmonters. I drew two battle plans for the enemy that could have been helpful in some battles, but not so here. So the Piedmonters stayed in column and suffered accordingly. Um, wasn’t it the French who devised the attack in column and didn’t everyone else, especially in 1796, deploy into line to receive the enemy? Well, these Piedmonters were ahead of their time or on hallucinogenics, because they fought the entire battle in column. Poor suckers. But it’s a solitaire game and that means the enemy is stuck with whatever the programmed rules provide for them, whether it sucks and is logically ludicrous and totally outside the realm of historicity, but that’s OK because it’s just a solitaire GAME.

So why did I buy this game? Simple fact, I didn’t. My son got it as a review copy and he doesn’t like solitaire games any more than I do. Since it’s a wargame, I offered to try it out for him. Sad to say, even all the chrome and brilliant design features that have evolved since Ambush still don’t do it for me. I need a living body on the other side of the table so I can feel that rush of adrenaline when I’m rolling to try to knock out that Tiger tank, or get to express that humble gloating of victory when my opponent finally caves in and admits I’ve crushed him – “Well, you had some really bad die rolls . . . .” I’ve never felt that in a solitaire game. Not even sure a solitaire game has ever solicited from me as much as a grin.

So back to my initial comments by way of conclusion. Field Commander is a slick and attractive product. The components are top notch, and it has some innovative concepts. If you enjoy solitaire games, you’ll almost certainly want this one. But if you’re a true grognard looking for a simulation that you can play with another active gamer, I recommend you treat this one as you would any other solitaire game.

I couldn't find this game at Noble Knight Games, but if you desperately want to pay a C-note for a game you can't play with other people, you can find it here, at the publisher's site:
http://www.dvg.com/.sc/ms/dd/ee/35/Field%20Commander%20Napoleon

You know, you had me hoping for a bit when you said that the opponent got battle plans instead of just set up and marched forward. But alas, you dashed them quickly by indicating that plans are really no better than some sort of rigid algorithm or card draw option.

And this is where I'm souring on solos and cooperatives. Your opponent simply isn't up to the challenge. He's a blind machine as likely to make boneheaded decisions as good ones, and at that point the game suffers too badly to make it worthwhile.

My alternative for casual play has been to get on Vassal's two-player titles and play both sides. Warriors of God has no hidden information and I can play one side and then the other. A bit of a shift of mindset is needed, but that's a better alternative than playing against a blind opponent that is unqualified to take the initiative.

A question (with luck Dad is tuning it) -- your opponent gets one single battle plan? You pull a single chit, implement and that's the end of it, or do you select from two or more?

I would like to see some level of user participation encoded into the opponent and I think that would be more appropriate for every solo game out there. You primarily play one side, but get the opportunity to insert a little sanity into the opponent. From what you've written that doesn't appear to be the case in Field Commander: Napoleon.

from the video reviews on the youtube , its been said that this game is better than the other field commanders..

I usually can't get anyone to play a strategic board game, except maybe Chess, which I totally suck at. So, solitaire gaming is the way I really have no choice but to go. So far, as the DVG Field Comdr.
Games go, I've only just recently
gotten into Rommel, and only the
Africa campaign. I have found it
impossible for the Axis to win, as
the game is written. Unless dice rolls go almost totally one way or the other, which, of course, they don't and wouldn't be fun if they did. I do have the other DVG FC
games (Nap, Alex) as well as Phantom Leader. Haven't gotten into any of them yet,except skimming rules occasionally, looking up reviews/faqs, etc. I'm lucky to have a specialty shop in the city where I live that generally can order games that are
available, that gives a 30% discount when paying with cash (the
store is actually a comic book shop, so board games aren't commonly ordered, nor are they carried at all. And if the distributor doesn't have it or can't order it, it's tough luck).

Anyway, Having only played the NA
campaign of Rommel several times
and being overwhelmed by the Allies
every time (even when I "cheat", by starting the Axis on board forces in the area adjacent to the
nearest Allies and starting 15th
& 21st Panzer at Elite status, and
not giving the Allies any Operation
Forces until the 2nd game turn...when I do all this, I've gotten the Axis as far as a 2 move
distance from Cairo, but by then, the Allies have at least twice as many units blocking and kick my ass
quite soundly), I honestly can NOT
say one way or the other about how I feel about the DVG FC series.

OH, one more thing: In the D-Day
scenario of Rommel, the victory
conditions state that if the ALLIES
(NOT ROMMEL!) hold all 3 objectives, the Axis wins and gets
VPs... (HUH???!) This makes no
sense, as the Germans had to try
to keep the Allies from gaining
ground and holding the objectives.
Is this a mistake in the game?
Shouldn't the Axis victory objectives be to hold the objectives at game end, when the
turn marker goes off the board?

PLEASE, will someone let me know whether they have encountered this, and what they think about it?
Thanks.

Thanks for the review! As someone who hasn't yet quite found ftf opponents, the solitaire route has its uses. For Sagrilarus, the old Victory Games title "The Pelopennesian War" handles enemy AI well: you switch sides when you start doing too well on one side. So, you start as the Athenians; once you're successful for a time, you're forced to switch sides to the Spartans. And so it goes. Works surprisingly well. As a player, the object is to gather victory points which you collect for various outcomes, regardless what side you are playing at the moment. It's you vs. the system and situation.
- B.