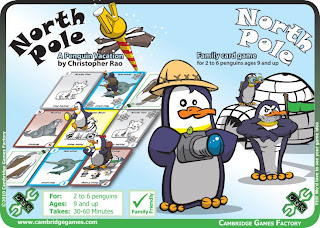 Penguins live in the South Pole. Not everyone knows that, but everyone should. So if you're a penguin, and you live at the South Pole, where would you vacation? Warmer climates are pretty much out - you've got more insulating fat on your gut than Dom DeLuise, and there's no way you can drink enough margaritas in Cabo to keep from melting into a pool of fat cells and tiny tuxedo feathers. Seems to me your only option is a place that's just as cold - the North Pole.

So off you go in a refrigerated plane cabin, and then when you get there, you realize that there's even less to do in the Arctic than there was back home. You put your cute little heads together, and come up with an activity sure to delight everyone - a race!

That's what you do in North Pole, anyway. You set up at your base camp, lay out an ice bridge of face-down playing cards, and start sledding, snow-shoeing, or just waddling your way to the big shiny barber's pole that God put at the North Pole so you would know when you could turn around.

This racing game from Cambridge Games lets you all be penguins, which is a dream held by almost nobody whatsoever over the age of six years old. Fortunately, North Pole is a kid's game, and thus the theme works just fine. But it's a good kid's game, the kind that a roomful of adults can play without a child anywhere in sight and still enjoy it. It doesn't have all that strategy and tactical brilliance that you look for when you're trying to play grown-up games, but it's smart enough to keep you occupied while still allowing your tiny spawn to get a kick out of stepping on narwhals at the frozen ass-end of the world.

Playing this game is incredibly simple. You have five cards, and you're trying to drop cards that let you shag it to the North Pole and back. If the card next to you is a walrus with a 3 on his card, you can play a walrus with a 4 and waddle onto that card. If you actually have a 3, you can snow-shoe there and still get to play again. Three of the same number will let you take a sled, which is handy when you want to go diagonally, and three of the same number and color let you dog sled and move twice.

If it was just playing the cards, North Pole would blow goats. There are two things that make this interesting. First, you can only draw two cards on your turn, so if you blow your wad on some killer diagonal sled move, you're going to be standing around for a while. You have to time your big moves or everyone will catch up to you while you gasp for breath (and it's damned hard to breath at the North Pole, unless you happen to be a penguin, which you are). But here's the interesting part - when you draw those two cards, you can take two off the top of the deck, or you can take two from the face-up stock of five. Use those cards well, and you can stack your hand to get where you need to go. It makes for some tough decisions - the hallmark of a good game.

The second thing is even cooler. A bunch of the cards have snowflakes on them, and when you use snowflakes to move, you can wreck the ice. Then the other penguins have to fix the ice before they can get past, which slows them down and diminishes their card supply, allowing you to rest for a moment before hauling ass for the finish line. Ruin the right icy paths, and you'll leave everyone else to curse in frustration and call you names. And that is what a game for children should be all about.

The art on North Pole is cute enough, but it's not going to win any awards. The graphic design is typical of Cambridge Games, which is to say that it's not particularly good. But the game is exceptional in being accessible for children and enjoyable by adults. That makes it a good kid's game in my book, and the kind I don't mind playing one bit.

2-6 kids or adults, whatever you've got handy

Pros:
Light and smart at the same time
Engaging for kids or grown-ups
Clever decisions that make your kids work for their win
Doesn't patronize

Noble Knight Games carries some of the games from Cambridge Games Factory, but not all of them. That means I don't actually have a link for you, which is kind of a shame, because North Pole really is a kid's game worth having.

I found so much useful data in this post!