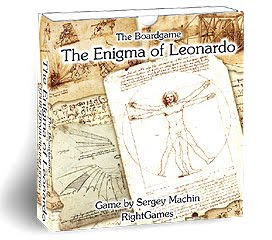 Being a child of the 80's, I have fond memories of the Cold War. Sure, we were all going to die in a nuclear holocaust that would fry most of us like marshmallows at a campfire, and the rest of us were going to have all our hair fall out before we were covered in horrible bruises and died barfing our guts onto the floor, but the movies were great. It was a time when "cloak and dagger" had absolutely nothing to do with rogues in elven footwear, and everything to do with spies stealing state secrets from Soviet intelligence agencies. The USSR was a nefarious enemy with closed borders, and many of my favorite stories were about daring night escapes across the Iron Curtain.

That time is well and truly past, though. The Soviet Union doesn't even exist any more, and the Berlin Wall was torn down more than twenty years ago. Citizens of the world can come and go through Russia, and with that freedom comes the possibility to get something we couldn't get when I was growing up - Russian games.

I recently acquired a box of games from Right Games, a Russian publisher with a surprisingly healthy catalog. Four of those games are translated into English - the four I have. So in the spirit of glasnost and perestroika, I'm going to make this week Russian Game week. I'm going to start with the weakest of the four games, and finish up next Friday with the best of the bunch. That means this first review will address The Enigma of Leonardo, a puzzlingly inept game with a relatively ridiculous theme.

If you just look at the art on the cover of the box, The Enigma of Leonardo looks like it has promise. But then you realize that the game was created using a Leonardo da Vinci clip art CD, and the art looks that good because Leonardo da Vinci made it. It's not like the game's designers went and created all these amazing illustrations themselves. If I make a movie and all the music is by Mozart, I can't exactly take credit for the soundtrack.

When you read the theme for the game, it starts to unravel pretty quickly, although I grant you that if you're a fan of tinfoil hats and UFO conspiracies, it might be more palatable. The idea is that da Vinci left secret codes in all his work, and if you just look at it the right way, you can solve the riddles. The purpose behind such an extravagant Easter egg hunt is not entirely clear. If you ask me, he was just trying to remind himself where he left his keys.

So you have a bunch of cards with da Vinci art on them, and several iconic symbols have been extracted from the master's work and stuck in a corner of each card. One card might show a bird and a hot air balloon, another shows a printing press and some guy's head, and yet another might have a cat and a magic wand. And the back of the card has a naked guy with too many arms and legs, which makes you wonder about an artist whose most famous piece of art features a man's hanging dingus.

You build a little grid and put out your cards, and then you try to match three in a row (because Leonardo da Vinci was a fan of tic-tac-toe). This can be tough to achieve, because when you take out one of your own cards and replace it with one from your hand, you have to put the one you took out into the grid of opponent to your left. Every time you set up a potential string, the guy who goes right before you screws up your whole display.

The result is a game that relies heavily on being lucky enough to have the right cards, and does virtually nothing to reward the good player. You put down the cards you have, hoping to build a set, and then right before your next turn, some douchebag takes the card you needed and gives you a paper bag full of burning dog crap. The game drags on from there, until some lucky soul manages to make matches seven times. Then everyone sighs with relief and shoves everything back in the box before checking to see if they could get a good price for the game on eBay.

It's not all bad, though. If you play a lot of games with kids, this could help you find something to do with them. There's a small amount of strategy here, enough to entertain bright children, as long as they haven't grown out of their Dora the Explorer underpants (it is worth noting that if you know kids who still wear Dora underpants when they start high school, they're probably still about the right mental level to play this game). It does look cool, and while it's not intelligent enough to appeal to anyone who can master Blokus, The Enigma of Leonardo could still be an interesting way to spend some time with your kids.

It might not seem fair to start off my Russian Game Week with a review of a game I didn't like, but take heart - the rest of the games are a lot better. And one is downright freaking brilliant.

Pros:
Great art (because it was created by Leonardo da Vinci)
Could be moderately entertaining for children

Cons:
Not much interesting, and not much fun
Translated Russian is spotty, and a little confusing in a few places

I honestly have no idea how you could get The Enigma of Leonardo if you don't live in Russia. But that's OK. You probably don't want it anyway.
Posted by Matt Drake at 10:28 AM