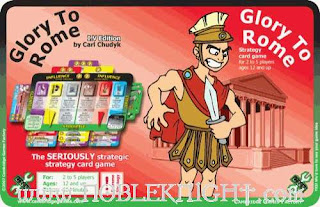 It is a well-known historical fact that at some point, ancient Rome caught on fire. Also known is that Nero played a fiddle. What is not as well known is that after he finished his violin solo, Nero went out on his patio, saw that the fire was out, and hired a bunch of his buddies to fix the town. That's where you come in.

Glory to Rome is a seriously engaging card game that has the players all acting as Roman patricians attempting to rebuild their burnt home and show the emperor (back then his nickname was 'Crazy Nero') that they love Rome the most. The reward for this loyalty was probably that they got to hear ol' Crazy play his fiddle again, but still, everyone was pretty excited, so they gave it a shot.

The game has a lot in common with games like Puerto Rico or Agricola, with actions that can be taken by everyone, limited resources, and a gradual build-up of power. And yet it feels a lot less like a dry European game than you would expect from a game with so much in common with some of the blandest games ever made. For one thing, there are soldiers who just might stab you, so it's a little more manly. For another thing, the theme for the game plays out a whole lot better than the other two.

Where Puerto Rico (or any of its spin-offs) tends to feel dry and often a little weak in the area of story-telling, Glory to Rome lets you feel like you could be walking down a cobbled road with hot half-naked slaves behind you while you direct the construction of a vomitorium (for those who are curious, a vomitorium is not a place you go to barf. It is a big exit so you can get out of the amphitheater after the gladiator fights and try to find your chariot in the parking lot. Interestingly enough, Julius Caesar once escaped assassination because he went to his room to hurl, and did not actually go to the vomitorium at all).

And the funny thing is that the art for the game contributes so well to the theme. This is funny because the art for Glory to Rome is not good at all. Some of it is decent, but none of it is particularly good. The pictures of ancient Roman buildings, in particular, often look like clip art. And yet despite having relatively amateurish art, the images actually help deliver the idea of a bunch of Roman douchebags building Rome so they can hang out with Nero at the block party-slash-orgy that weekend.

But the real reason Glory to Rome shines is because it is pretty darn intense. There's a sort of race to grab what you can while you have the chance, and if you get too wrapped up in the race, you can trip over your feet and wind up without any way to finish all the projects you've started. There's a huge motivation to want to join in on all the cool actions being taken instead of bolstering your hand with more cards, and yet if you're always jumping on the bandwagon, you'll never have time to build up your own resources.

Another brilliant aspect of Glory to Rome is how many different strategies you can employ. Of course, building houses is the obvious choice, but it's not the only way to win. Because you're a corrupt Roman politician, you can take the marble and stone and wood and stuff that you get from Nero to rebuild, and sell it to private merchants to amass a personal fortune. Sure, Crazy Nero would disapprove, but he'll forget all about it if you throw a wild party and ply him with wine and naked girls.

There are also plenty of different strategies for building stuff. Send laborers out to gather materials and then hire architects to supervise the build, or hire strong-arm legionaries to steal what you need so the craftsmen can lay brick. Hire an army of laborers to steal all the marble, and then sell it all to glad-handing crooks and line your own pockets. Or go balanced and just try to build a bunch of stuff, because the buildings tend to have some pretty serious abilities on their own.

If there is a downside to Glory to Rome (I mean outside the unimpressive illustration and blatant overuse of gradients), it comes from the buildings. A game could be neck-and-neck, with everyone pushing just a little bit at a time, and then one person builds the super-building and hires every laborer in the pool, then runs off with all the stone and wood leaving the rest to figure out what they can build out of pocket lint and dried chewing gum. The rest of the game will be a desperate race for second place, while that one guy goes on to build the Sears Tower and the others all scrabbling to build a wooden outhouse.

But while some people might see this as a balance issue, I wouldn't change one thing (well, not counting the art. There's an Italian version on BGG that looks absolutely amazing, and I would use that art instead). The crazy building powers are part of the game, and whether you stumble onto a particularly impressive collection or have the foresight and planning to make the killer combinations work for you, the buildings add a layer of excitement and tension that makes Glory to Rome hundreds of times more exciting than some dry-as-a-mattress European farming game.

While I would really love it if Cambridge Games Factory released an English-language version of Glory to Rome with the art from the Italian version (and I'm not as excited about the Black Box version, because while it is better than the original, it is not as much fun as the Italian art), I can absolutely tell you that I won't be getting rid of my copy of Glory to Rome unless I learn Italian. It's not often that I get to play a game that I find so compelling and nearly addictive as Glory to Rome. I can tell it was a good game, because after we played, we spent the next four days discussing alternate strategies, different combinations, and most of all, when we could play again.

Pros:
Intensely well-designed and thoroughly playtested
Smart and tense
Everyone is playing, every turn - no down time
Feels like what it's supposed to be

Cons:
Definitely shows its European roots (only a con if you need blood in your games)
Painfully underwhelming visual presentation
Some balance issues may scare off the crybabies

When you see the price Noble Knight Games has on Glory to Rome, you're going to want a copy. If you like to scheme, plan and hose your friends, you really should get it:
AVE CRAZY NERO

Ideally I'd prefer to see the Polish version produced in English (not American English) but would buy any of the European redesigns in English.
The black box edition is just another kind of clip art design.