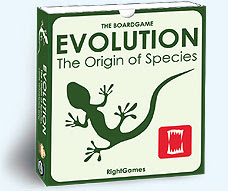 Ever since I was old enough to dissect a dead frog that had been soaking in formaldehyde for weeks, I wanted to play a game that would allow me to create an enormously fat fish with a tapeworm. Until now, there just weren't games that would let me manipulate genetic codes that way, but thanks to a brilliant Russian game designer, now I finally have the option to genetically engineer a burrowing wolverine the size of a brontosaurus.

Evolution looks like a simple game on the surface. You just play animals and add traits to help them survive the winter. The problem is, there's rarely enough food to let all the animals eat, so something is going to die out. It will probably be the near-sighted velociraptor.

A really neat element of Evolution (the game, not the process) is that the back of every card shows a little squiggly lizard, and if you play the card face-down, it doesn't matter what the card says, because that's a new animal. Then you can add stuff like swimming and running and sharp vision, which leaves you with a really fast fish wearing prescription sunglasses.

Another fascinating twist is the carnivore trait. Slap this one on your previously meek leaf-eater, and your animal can eat other people's animals. This is particularly amusing if the animal in question used to be an antelope with a poison gland. Of course, predators have to eat more, so they'll be dreadfully inclined to gnaw on your favorite flock of camouflaged crows, which makes the guy with the meat-eater on the table the number one target for extinction.

Much of the game centers around trying to eliminate your opponents' animals while keeping your own alive. It's not easy, either, because sometimes all it takes to kill an animal is to give it a parasite and watch the poor diseased beast wither away when winter comes. Of course, if your genetic super-critter is a carnivore, you can just feed him the other animals you've created. I suggest the tubby weasel, because next turn he'll probably learn how to swim.

We've enjoyed playing this an awful lot, but at some level, Evolution does tend to be a little formulaic. If you can get your animals to cooperate and communicate with each other, then make them poisonous so nobody else wants to eat them, you can feel free to add all kinds of genetic upgrades without having to sweat your impending doom. Many upgrades are far more important, and so your optimal moves are often a little too obvious.

On the other hand, while it may be possible to make a good play based on what you've seen as the best move you could assemble, it's never entirely possible to account for the other players, and that's where Evolution really shines. You're constantly trying to upgrade your animals, while making sure the other critters on the board don't survive long enough to have little baby telepathic lemurs. No matter how solid your strategy from the outset, you have to constantly be wary of everyone else at the table, because if someone manages to make a giant, sharp-eyed carnivore, you better learn how to swim, and fast.

My favorite way to kill other animals, though, isn't an animal at all. Well, OK, I suppose tapeworms are animals. Anyway, when you play a parasite on an opponent's ravenous mountain goat, they have to eat twice as much food or keel over. It can be terribly difficult to feed your animal and still have food left over for his intestinal carry-on luggage, so critters with worms tend to die out. If you do manage to keep your parasite-infected animal alive until the end of the game, he's worth a lot more points, so when you play a worm on an opponent, you're gambling that the winter is lean enough that the poor bloated cave bear starves out before the end of the game.

So it seems the Russians have some pretty serious skills in the art of game design. Evolution is fast-paced and clever, with lots of fun combinations that don't make any sense at all and a continual sense of impending doom at the hands of your fellow gene-splicers. It may have an educational aspect to it, but if there's anything to be learned, it's more about how the process of evolution works (in theory) and not so much about particular animals. Because everyone knows it would be silly to make an animal that eats out of another animal's mouth.

Pros:
Make a good plan and stick to it - but you still have to be flexible
Mildly educational
You can hedge your bets, but you can never be entirely safe
Translation is better than a lot of native English games

Cons:
Could be too easy to 'solve'
Very basic design and art feels a little dry

If you want to pick up this fun and clever game, here's an eBay seller who has it right now:
AQUATIC BADGERS AWAIT
Posted by Matt Drake at 2:45 PM

Have you ever played Primordial Soup, and if so how does this compare?

(I'm a regular reader but have never commented before. Great blog, one of my favorites!)

Another example of an evolution card game is this new game from Finland:
http://boardgamegeek.com/boardgame/101718/terra-evolution

thanks for sharing, this one has been on my radar, now it goes on my wish list!