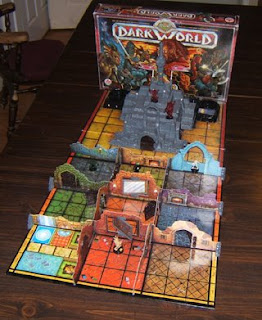 If Dark World were a girl, she would have the following to say regarding geography lessons:

"I truly believe, that U.S. Americans cannot do so, because, um, such as, they don't all have maps, such as, because, the Iraq..."

Because, see, Dark World is really fun to look at, but it's pretty dumb.

The game pits up to four adventurers against the evil Korak, who is not Russian. He is a snake man. Korak controls a dungeon full of monsters, through which the heroes must wind to finally face the snake man in his castle.

The monsters are not half bad. They're all that 90's colored plastic we loved in Heroquest and Warhammer minis before all the games started using that cheap soft plastic that makes your paint crack. The sculpts are... well, they suck, but they're still better than cardboard counters. The heroes are all plastic figures, too, and they have holes in their hands to hold little interchangeable weapons (until the weapons fall out, which happens just about every time you touch them).

All the figures in the game come separate from their bases. This is because the bases are special - hero bases click through the numbers 1-8, and monster bases have a numbered disc pushed up into the bottom to show how tough they are. For the record, the monsters are not tough, but they sure are fun to look at, like Demi Moore pretending to be a Navy Seal. They seem intimidating enough until you realize that old women with Life Alert bracelets could beat them up with their walkers.

Combat is pretty lame. There are three identical dice, with blank sides, one dagger, or two daggers. You roll the dice, you check under the little monster figure, and if you've rolled as many daggers as the number jammed up under the monster's base, you kill him. Otherwise he punches you in the junk. Repeat until one of you is pushing up daisies. This will almost always be the bad guy.

The dungeon is really cool, though. It's composed of nine rooms leading to the castle (which is also awesome to see). Cardstock walls and plastic holders combine to make this grid of rooms, each connected by actual swinging plastic doors and spinning secret panels. The graphics are really impressive, too. Like dating a stupid cheerleader, the eye candy can be fun for a while, and more than make up for the complete lack of meaningful content, at least until the novelty wears off.

The castle actually has to be built each game, and is composed of six or seven different parts, including arches and stairways and swinging doors. There's no reason for the doors to swing, but there they are, like a girl in a thoroughly impractical but really hot bustier. You can store extra monsters underneath the castle, and there are trays for storing money and spare magic items like healing potions, speedy boots, and holy hand grenades of Antioch.

There's a really cool (but completely unnecessary) turn order mechanic - a plastic mace with colored balls. You shake the mace and stick it in the top of the castle, and the colored balls fall into order to tell you who goes when. This is simultaneously the coolest thing about the game, and the dumbest. It's a really cool idea, and it's so much fun to shake the little mace and then call out colors, but it could have been completely replaced with four colored cards. It's like a Dallas trophy wife - worthless for anything that counts, but great for impressing people who don't know better.

As the game draws to a close, the heroes converge on Korak's castle, intent on driving their golden weapons through his scaly face. Korak is a real beast to kill - he's got a half-dozen helpers surrounding him, plus a manticore. Except that the heroes can use their magic items to wade through the monsters like a fat guy at a pizza buffet, so that the real race is to see who can get to Korak first to deal the killing blow. Then all the heroes compare their earnings, and the hero who was the best at killing wins the game. Korak wins if he can kill all the heroes, but that's so unlikely it's not worth mentioning. Sort of like the odds of getting to third base with that hot chick from HR who always forgets not to wear a black bra with a white shirt.

Cons:
Almost impossible for the bad guy to win
Somehow makes killing things dull
Dumber than a bag of hammers


Dark World is yet another game for which I cannot provide a link, as it is also pretty out of print.
Posted by Matt Drake at 9:04 PM

Kids games I tell you, I am waiting for the more mature dugeon crawl games, I think these are OK games if you played them as a kid, but other wise they suck - for older people. Kinda like I have witch's Caldron form 1981 - since I played it as a kid I like it and call it a simple heroscape game, but everyone else is like " this sucks " he he

Thanks for another solid review.

Well somebody had to play it. Good thing it was you.

I was looking fr this game, and intended to buy it. thank you for the heads-up. But am still interested in a good dungeon game, could any of you recommend me one?

That review is very accurate!
My new project, is to intermingle this game with Reaper Bones minis and Mantic undead minis to create a nicer look about the game.

Working on rule re-vamps, like turning 'unconcious heroes' into possessed zombie versions of themselves that are controlled by the bad guy for a few turns (until they roll a 8,9,10 on the D10).

The action needs spicing up too, so thanks for the heads-up.