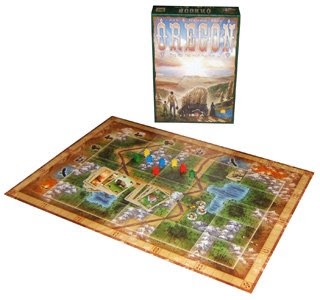 One of my most favorite genres is the western. I love old gunfighter comics, shoot-em-up western movies, and biographies of outlaws. I love Deadwood, Unforgiven and Jonah Hex. I know hundreds of lines from old Clint Eastwood spaghetti westerns, and I can adequately compare the caliber of The Quick and the Dead to 3:10 to Yuma. I mean, I love westerns.

So along comes this game from Rio Grande Games called Oregon, where you're settling that territory. And I pick up the box and go, 'hot damn! A western game!'

Well, you can probably guess what happened. It's a Rio Grande game, which means it's a Euro, which means it's made by people who don't dig violence. Somebody went and made an entire game themed on the frontier of the Old West and managed to have not one single gunfight. No outlaws, no sheriffs, no cattle rustlers or gunfighters. Not even any gambling or whiskey. It's like a western game made by the Women's Temperance League.

The board game is a stylized, illustrated map of Oregon with a big square grid all over it. There are five symbols across the top, and the same down the side - Old West symbols like a campfire and a bison and a covered wagon. No bullets, though, and no beat-up playing cards or faro tables. John Wayne would not have been impressed.

The symbols across the top and sides match the landscape cards every player has in his or her hand. You play two cards, and that lets you place a farmer in any of the squares where those two symbols meet on the grid. Norwegians made this game, so your little cowboy-hat-wearing meeples are farmers, not settlers. Everyone in America knows settlers are cooler than farmers, but Norwegians apparently didn't know that. Cowboys are also cooler than farmers (no offense to any farmers out there, but Willy Nelson didn't say, 'Mommas, don't let your babies grow up to be farmers').

There's a second deck of cards with buildings on them, and you can play a building card and a landscape card to put out a building. These are mostly pretty western - there's a church, and a general store, and a train station. But there's also a post office, another dead giveaway - a Pony Express stop would have been western. Post offices are a little too 20th century for a western game. But the Norwegians might not have known that.

These tokens - the extra turn and the joker - are key to winning the game. If you have the joker available, you can place a farmer or building almost anywhere, and if you've got the extra turn active, you can play twice in a row. Sometimes grabbing the juiciest spot on the board depends on these tokens, so any time you can get them active, you're doing yourself a favor. Really good plays use a joker to put a farmer next to a general store, essentially making the joker free and getting a decent scoring opportunity in the bargain.

Taken simply as a game, Oregon is pretty damned good. These Norwegians don't know what made the Old West great, but they do know how to make a fun game. Swiping key spots, making cunning plays, and denying opponents the opportunity to place their farmer meeples where they want them can be tricky, but it makes a great game. There's a fair amount of luck - you may need an eagle and a wagon to place a farmer where you want him, but all you seem to pull are bison and campfires. But building a flexible strategy, planning your placement and working with what you have are key to the game, and the luck tends to favor the better players.

The theme, on the other hand, could use a little work. Even if they didn't want to introduce gunfighters and Indians, they should have at least made the meeples into settlers. Farmers are great in Carcassonne, but Oregon is a long ways from France. This game would not earn an endorsement from Wyatt Earp, I'll tell you that. But then again, if Wyatt Earp could appreciate a good game of strategy (as opposed to running a faro table), he might have liked the game, even as he laughed at the Norwegians who thought Oregon didn't have six-shooters.

Cons:
Almost an abstract game, which will not appeal to Ameritrashers
Peacenik Norwegians might not be the best people to consult about the Old West

I recommend Oregon for anyone looking for a good family game, or a light-to-medium Euro. You can get one here:
http://www.funagain.com/control/product/~product_id=018326
Posted by Matt Drake at 7:00 PM

Sounds like a great game, just the wrong theme! I have seen this one around and thought about it a few times, but I agree with you, how can you have a game about the wild west with no guns involved?

Oh yea, I just got my game, you rock, I played Conquest twice last night, but with just 2 people and it worked out great for us. After we knew what we where doing we ended at 75 to 74, I just barely pulled out the win! Thanks and I got more photo's coming your way soon !