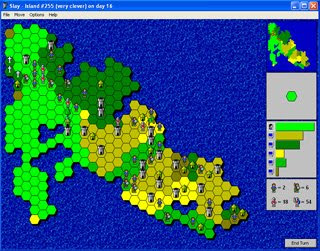 You know how addictive those crappy games can be that come with Windows? Like how you end up playing Free Cell just to kill time while you finish your breakfast and you're done checking e-mail, and then you're late for work because you had to squeeze in just one more game? Or that time-sucking void of a game, Minesweeper? Man, I've lost some hours of my life playing that silly game.

But I never would have touched either one if I had installed Slay. In fact, as I type this, I'm half-tempted to cut the review short just so I can go squeeze in a quick game. The genius of this little Windows game blows my mind - enough that it makes me want to review a clever little $20 download game from a near-unknown game designer who just cranks out cool games for Windows.

A quick spin through the archives will tell even the most casual observer that I tend to review board games over anything else. But reviewing Slay is like a board game that you play on the computer. Yeah, that sounds retarded. But stick with me a minute here, and I'll lay it out.

Slay is a turn-based game where you're trying to take over an island. The island is basically a bunch of hexes, all in different colors, and your goal is to make them all your color. The catch is that all those other colors represent other guys trying their damnedest to make the whole island their color, which means somebody has to die. All too often, that someone is you.

The rules are fairly simple, and the game is easy to understand. First, you've got one or more territories, which are clusters of adjacent hexes in your color. Each territory has a capitol city where all your money is stored. At the beginning of the turn, you get money equal to the number of hexes that are your color. Then you buy little dudes who go out and grab more land for you.

But the little farmers you start with are not particularly good brawlers. In fact, they're total pansies - they can't even get close to a capitol city without crying like little girls. But they're not all bad - the little boogers are cheap, and they hardly eat anything. They'll chop down trees, grab open land, and bring home the bacon.

If you want someone with a little punch, you can combine two of the wimpy farmers and get a soldier. Soldiers can stomp capitol cities into the mud, and they run over farmers the way I step in dog turds when I mow my back yard (if my son's life depending on his ability to do his chores, we would be collecting his life insurance). Of course, soldiers eat a lot more, which means if they're stuck in a small territory, they might end up going hungry. And then they die, which sucks, especially for them.

To stop the soldiers, your enemies will make castles. You might make some of your own, because your enemies will be making soldiers before too long. Soldiers can't even get close to castles, so the castles will hold them off for a while. But you can combine a farmer and a soldier and get a knight, and knights love to crush castles. But knights eat three times what a soldier eats, so if you promote yourself a knight before you can afford him, you'll get one good attack before everyone in the area starves to death.

Of course, really tough knights mean you need something tougher, so you can combine a knight and a farmer to get a... I don't know, a super-knight or something. This big bastard can't be killed by any other guy in the game, but he eats like an army of teenagers after a basketball game, so he's unfortunately easy to starve. He's horribly expensive to get and maintain, but he's incredibly hard to beat. Sort of like Alex Rodriguez, but not as prone to blowing the whole season in the last six games.

To complicate this festival of starvation and wholesale murder, wherever somebody dies of starvation, their corpses are so fertile that they turn into trees. That would work great in real life, but in this game, trees do two things: they keep you from collecting money, and they spread. It doesn't matter how big your territory might be - if it gets covered with trees, you don't generate any money, and if you don't generate money, your army dies.

The game goes until one player controls the whole island. Happily, once you're so far ahead that the only thing left is to hear the lamentation of their women, your computer opponents will throw in the towel, saving you the five minutes it would take to grab every single spot.

The whole game can generally be played in about 15 minutes, but if I had a buck for every night I said, 'just one game' and was still sitting at my computer an hour later, I would have... I don't know, fifty or sixty bucks. The computer opponents can be set anywhere from dumb as a post to insanely clever, and once you beat an island on 'stupid' it's too tempting to try it again on 'DAMN that's hard.'

There's a network mode that will let you play multiplayer games if you buy the game, but to be perfectly honest, I've never found anyone playing when I want to play another person. If you buy this game, drop me an email and let me know when you'll be online. I'm great at beating the crap out of the AI. I would love to try my hand against a person.

If you want to try Slay for free, you can play download the demo here and play the first island as often as you like:
http://www.windowsgames.co.uk/slay.html
Posted by Matt Drake at 9:59 PM

This one does sound good to me. Turned based, Ok I will say it is like a board game, no problem there. It sounds fun if nothing else, and it sounds fast, I though it might be a really long game from the explanation.

It is very good. VERY addictive. I had to delete it in the end to preserve my sanity and my marriage.