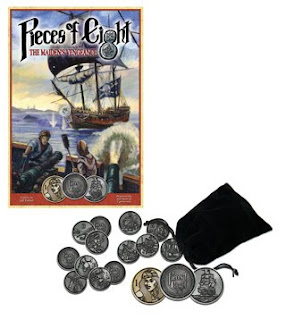 Cool gimmicks have powered some really big games. The clicky base, for instance, was a huge gimmick that was actually a game mechanic. Sure, you could have replaced it with a card with a little slider, but that would have killed the gimmick (and probably the game - they weren't going to sell the first Mage Knight sets just on the god-awful sculpts and pathetic paint jobs). And Dark World, which I reviewed for the dungeon series a couple weeks ago, used that silly mace with the colored balls - which was actually pretty cool, but entirely unnecessary. I could go on, but then I would get bored.

Gimmicks can actually be pretty cool (never mind that the two examples I used were either ugly or stupid). The clicky base was a great idea, whether you liked the games or not. The little shaker mace was the coolest (and stupidest) part of Dark World. Dungeon Twister has spinning rooms. Ca$h N Gun$ has foam pistols. A properly-implemented gimmick can turn a mediocre game into a great game, speed up game play, or just help everyone have more fun.

So I've seen some gimmicks, but Pieces of Eight has one of the coolest tactile gimmicks ever - actual metal coins. Big as a silver dollar, each coin has a special ability, and stacked in a pile, the coins make up each pirate's ship. The game is played entirely with these metal coins - no board, no timers, no meeples, no cards. Just a handful of awesome metal coins.

Each player is a pirate captain. Each captain has a ship. And like I said, the ship is a pile of coins. And not cheap plastic crap churned out by some disreputable Chinese manufacturer; these are actual metal coins, engraved on one side with the name of the game and on the other with a cool symbol describing that coin's abilities. They've got some heft to them, and they're pretty, and they're actual metal coins. Yeah, I said that already. I just think that's a pretty cool gimmick.

Players hold their coins in a stack, so that any opponents can see the first coin in the stack, but only they know what's at the back. They can transfer a coin to the crow's nest (you or I might call it 'your other hand'), and so have three active coins - the one in the front (fore), the hidden one in back (aft) or the one in the other hand (the crow's nest). On a player's turn, he decides which coin he's going to use.

The most interesting coins, however, are the combo and reactive coins. Like you discard your cutlass to destroy an enemy's coin, but if you've got an active mate, you can keep the cutlass to use again later. Or treachery, which you destroy when an enemy uses a coin to negate that coin's ability and destroy it. Or my daughter's personal favorite, the captain's monkey, which is nearly impossible to destroy (but easy to steal, which makes my daughter punch me every time I do it). There's a barrel of grog, which you can use to get back one of your destroyed coins, but unfortunately, there's no tawdry tavern wench. I don't care what that one would have done, I would have used it.

The object of the game is to destroy your opponent's gold-colored captain coin. This isn't easy, because the captain is buried in the middle of stack of coins, so you have to wear down the stack to get to the captain. And to make matters worse, once the captain is exposed, he (or she - there are girl captains) can just smack the bejeezus out of your coins without having to work for it. And some coins let you rearrange your coins, so you can get your captain protected after the front half of your imaginary ship is blown off.

There are two keys to winning this game. The first is building your ship properly ahead of time. There's no use putting bombs into your ship if you don't include mates, because bombs have to have mates to fire them off. The order you use to stack your coins is terribly important - put the monkey next to the captain as a last-resort shield, but make sure you keep those mates where they can help - and include enough to keep them around a while when your opponent finds out where they are and starts mowing through them like your fat uncle on a Thanksgiving turkey.

The second key to winning is actually playing well. Use the combos and reactive coins to make your opponents miss turns, or steal their coins, or rescue your own blasted coins. Hold out with the treachery until your opponent breaks out the captain's monkey, or tries to pillage your captain. Play the right coin at the wrong time, and you may as well just play the wrong coin. Yeah, it's good to blast your opponent's cutlass before he knocks off the cannon in your crow's nest (and how you got a cannon in the crow's nest is your business), but it might be better to take aim at the call to quarters coin that your foe is about to use to rearrange his whole ship.

You may be reading this and thinking, 'gee, that sounds an awful lot like a collectible card game, what with the deck-building and careful card play.' To which I would reply, 'well, duh.' I did say the coins were a gimmick, and they really are. You could replace them with cards - but then the game wouldn't be nearly as fun. Besides, it's called Pieces of Eight. If it only had cards, they would have had to call it Pieces of Paper, and that does not sound like a fun game. It may have been cheaper to produce, but it wouldn't have sold too well.

Right now you can buy two different sets of Pieces of Eight. Each set has enough coins for one player to make a ship, with a few extra coins left over. The two sets differ in their composition, but only slightly, and you'll need to buy two sets if you want to play anyway, so start out with one of each.

One last note - these are metal coins. Don't eat french fries right after you play the game. Your mother would be horrified if she found out you were playing with coins and then eating. She would tell you that you don't know where those coins have been.

If you want to play a really cool game with a sweet gimmick that you can enjoy in 15 minutes and teach to a twelve-year-old, Pieces of Eight should be a must-buy. You can get it here:
http://www.funagain.com/control/category/~category_id=SERIES_10198
Posted by Matt Drake at 7:19 PM

I like this gimmick, it sounds fun to me. I am really enjoying light fast games with my wife for now, I am getting here ready for longer and more involved games and it is working.

I will check this one out when I get states side, the only draw back for is, it sounds heavy?

I picked up two (different) boxes of this game at 2009 DexCon with some prize points I'd saved up from kicking ass in some of the games. It jingles nicely in the box, but I haven't gotten a chance to play it yet.